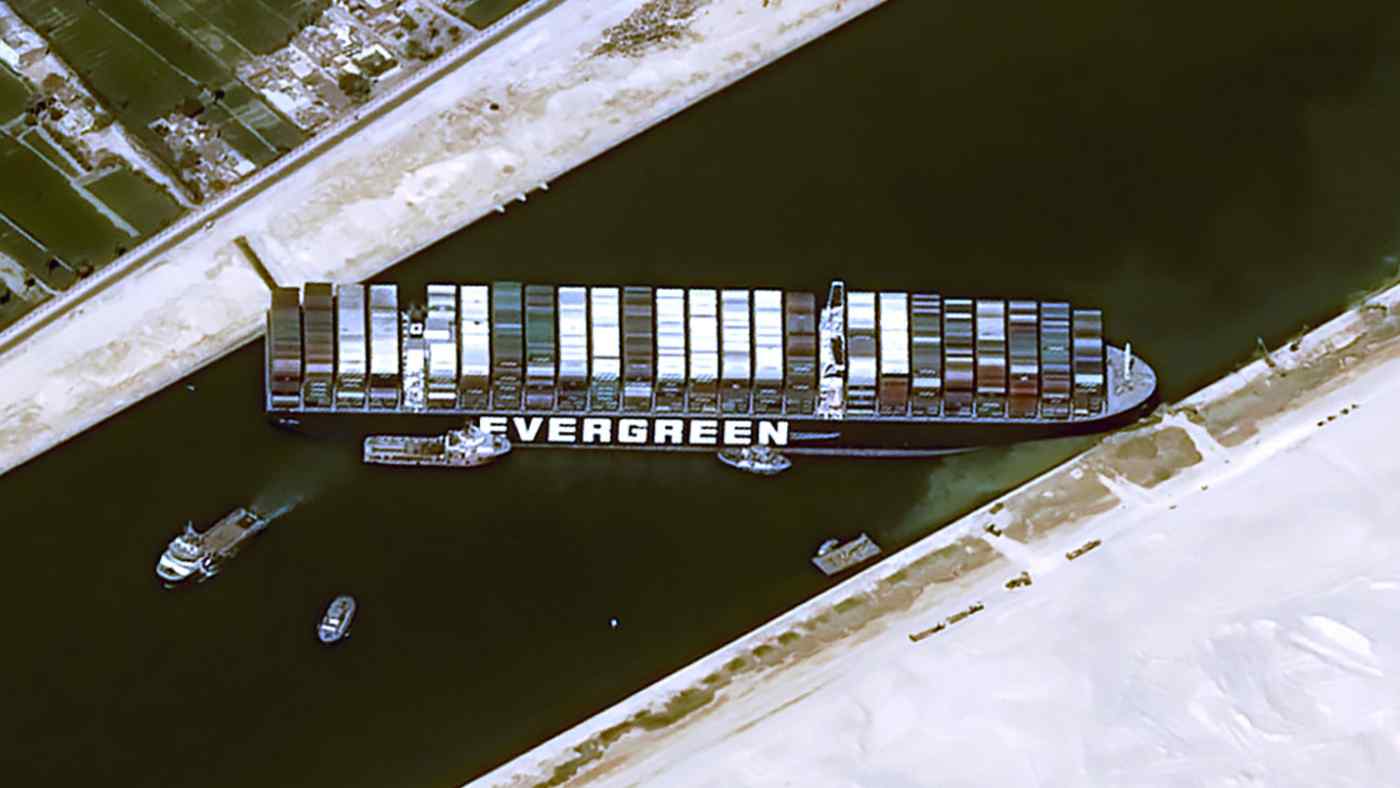 IMABARI, Japan/TOKYO -- The Japanese owner of the ship blocking the Suez Canal aims to free the vessel by Saturday night Japan time, the company said on Friday.

Shoei Kisen set out the time frame to dislodge the Ever Given as the company's president apologized for the disruption caused by the stranding of the 400-meter-long container vessel in one of the world's busiest waterways.

The company, an affiliate of major Japanese shipbuilder Imabari Shipbuilding, is trying to remove sediment from around the bow of the 200,000-ton vessel but has "still not succeeded in doing so," Yukito Higaki told reporters Friday.

Ship-tracking websites suggest that some vessels in the Atlantic and Indian oceans are changing course away from routes that would take them through the Suez Canal.

One representative at a materials maker told Nikkei that it is considering switching to Arctic sea routes, now that the ice is melting.

Shipping news journal Lloyd's List says that around 230 vessels are stranded on both sides of the Ever Given as of Friday.

"We are continuing work to remove sediment as of now, with additional dredging tools," said Shoei's Higaki. The company aims to free the ship "tomorrow night Japan time," he added.

The hope is that the expected high tide offers a chance for freeing the massive containership.

Higaki apologized for the "great trouble and concern" as a result of the incident. "We want to work hard and get the situation back to normal," he said.

The Ever Given ran aground in the canal on Tuesday, completely blocking one of the world's main maritime arteries. The blockage is sparking fears over disruption to global trade as other vessels are delayed or rerouted. Around 10% of global trade passes through the Egypt-controlled waterway. Dozens of ships are waiting at each end of the canal. Executives of Shoei Kisen, the Japanese owner of the containership blocking the Suez Canal, apologized for the disruption at a press conference on March 26.

Shoei is not yet sure about the cost of the accident. "We will consult with an insurance company and respond once we receive [a bill]," Shoei's senior managing director Toshiaki Fujiwara said. There are currently no talks of compensation for delaying other ships. "Rescuing the ship is the priority, and negotiations [about compensation] would come later," Fujiwara said.

The Panama-registered vessel is operated by Evergreen Marine of Taiwan.

Higaki explained that while Shoei owns the ship, the company has contracts with a German company for the ship's maintenance and crews. Shoei will be responsible for rescuing and repairing the ship.

Asked about responsibility for compensation for losses caused by the blockage, Higaki said only that the company would comply with the law. "There are many laws," including international and local ones, Higaki said.

Higaki acknowledged that he "cannot say for sure" whether insurance would cover the cost of dealing with the incident. He said the company is still investigating the cause.

"We can only presume that it was due to a rapid change in weather conditions," he said. The company added that there were no reports about navigation instrument problems.

Five experts dispatched by an insurance company have been collaborating with local authorities in Suez since Thursday, according to the company, which is also arranging to dispatch two large tug boats to add to the 10 already at the site.

Shoei said the ship's rudder was able to move freely. There is no oil leak stemming from the accident, the company added, nor any injury to crew.

Several media reports have suggested that freeing the Ever Given could take at least several more days.

The Suez logjam is already raising freight rates and thus revenue for shippers. Shares in HMM, South Korea's largest shipping company, were up 14% in Seoul on Friday as expectations grew that some companies would profit from the disruption.

HMM said one of its containerships coming from Europe was standing by outside the Suez Canal. "We are told that the Suez port authority will take action by the weekend. We are watching developments carefully," said a spokesman for HMM, also known as Hyundai Merchant Marine.

Moody's, the credit rating agency, said on Friday that Europe's manufacturing, auto and auto suppliers were expected to be most affected by a blockage.

"Even if the situation is resolved within the next 48 hours, port congestion and further delay to an already constrained supply chain is inevitable," said Daniel Harlid, a vice president at Moody's.