Private Chinese airline to slash capital investment by over 90% 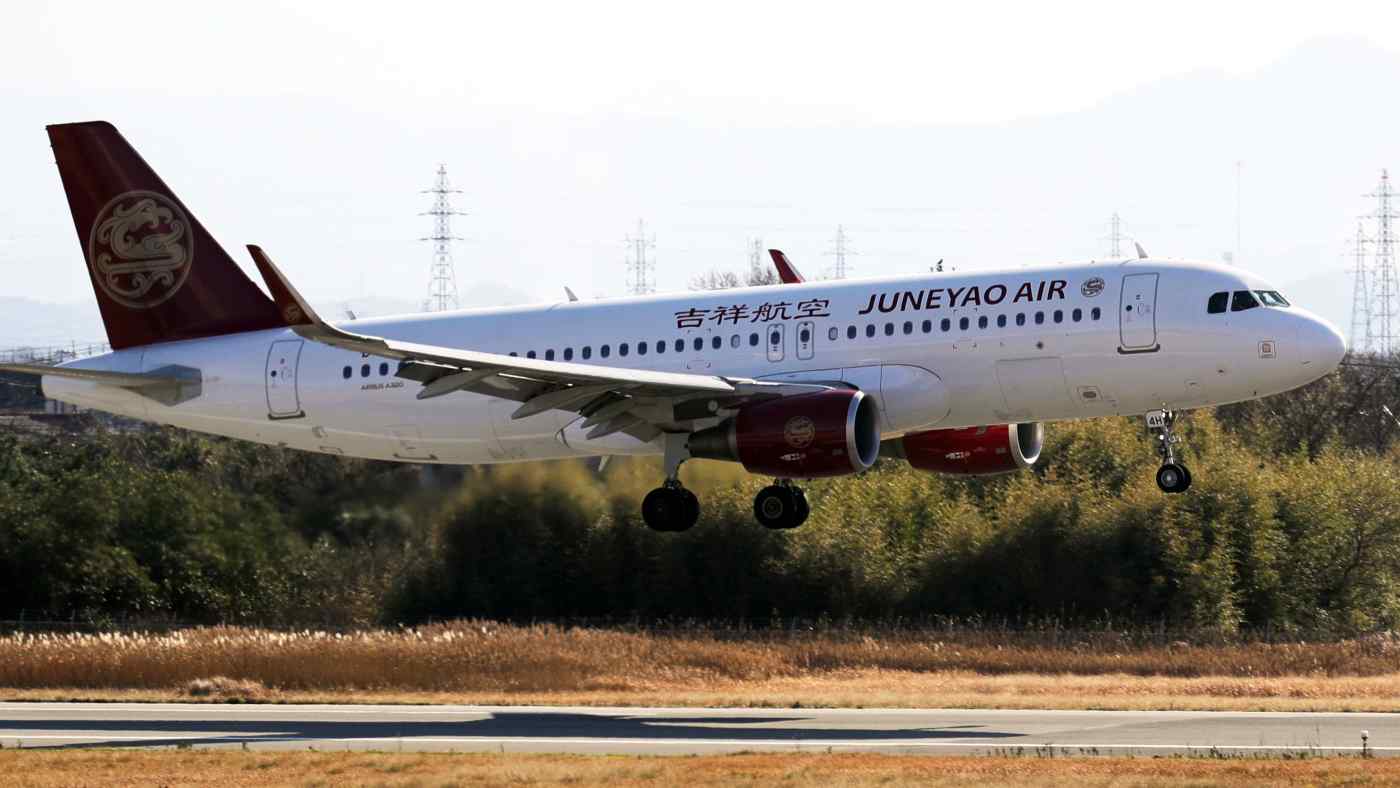 TOKYO -- Private Chinese carrier Juneyao Airlines is drastically cutting back on its investment plans this year due to the devastating impact of the novel coronavirus on the industry, even as its state-owned peers continue to enjoy adequate funding.

Juneyao, a Shanghai-listed midsize carrier, will spend just $200 million on capital expenditure this year, according to its annual earnings filing made to the stock exchange on Saturday. That is 91% less than the original plan of $2.267 billion, which disclosed a year ago in a similar filing,

The radical cut will directly affects its fleet expansion. The company had planned to acquire a total of 20 planes: 15 for its full-service airline under the Juneyao brand and five for its budget arm, Jiuyuan Airlines, also known as 9 Air. Under its revised budget, it will acquire just nine aircraft, all for Juneyao.

According to the Juneyao group's stated fleet strategy, the airline will cut its orders of narrow-body Airbus A320 series craft from 11 to seven, and halve its order of Boeing's B787 Dreamliners to two. Jiuyuan, based in Guangzhou, only flies Boeing's narrow-body B737s.

The group's management struck a different tone in its latest disclosure, saying, "the company in the future will prudently expand its fleet size and realize economy of scale and effectiveness." The words "prudently" and "effectiveness" were missing from a similar pledge made a year ago.

Juneyao will also be tightening its budget for next year and beyond. For 2021, the total capex was trimmed to $250 million from $1.618 billion, which translates to 12 new aircraft purchases versus the original plan of 20. The newly disclosed plan for 2022 is on a similar line, with capex spending squeezed to $150 million and aircraft acquisitions down to 11.

On top of the sharp investment cuts, the company is putting a lid on cash dividend payments as well. The board proposed a 0.1 yuan per share payment to shareholders, which would put its payout ratio at 19.77% -- below the 30% benchmark set by Chinese regulators.

In justifying the low dividend payout, the board cited "the severe challenge that the global airline industry has been facing" since the beginning of the year due to the novel coronavirus pandemic. Though the airline follows Beijing's official line that the virus is "basically under control" in China, it also claims that the situation beyond its borders is growing worse, which brings about "relatively large uncertainty on its domestic and international operations." In order to deal with this, the board believes that "the company needs powerful funding support for its development in 2020."

Juneyao group saw its carried passengers in February to drop by 77% to 411,334. Sharp cuts in its operations have been made, including its new international service connecting its Shanghai Pudong hub with the western Japanese city of Yonago. The route which opened with great fanfare on Jan. 11, had to be suspended less than a month later in February. Despite such cuts, its passenger load factor dropped below 50%, far lower than its 2019 average of 85.23%. Juneyao Air launched Shanghai Pudong-Yonago service in January, but had to suspend the route the following month due to the coronavirus outbreak. (Photo by Ken Kobayashi)

The three state airlines are planning a total of 89.94 billion yuan in capital expenditure for 2020, up 24 % from a year ago. Even though China Eastern Airlines is slimming down its budget by 26% to 18.38 billion yuan, China Southern Airlines has added 28% and Air China almost doubled its investment plan. For 2021, all three are increasing their spending, bringing the two-year aggregate to 152.93 billion yuan, or 53% more than their original plans. BOC Aviation, a major aircraft leasing company under Bank of China, says it has delivered at least two Airbus A320NEO aircraft to Air China this year already.

The three parent companies of the state-owned airlines are central companies -- the 97 top SOEs directly owned and controlled by the central government. Due to their strategic nature, they enjoy preferential treatment even among their state-owned peers, and in return are expected to undertake important policy missions of the Party and the state.

"The coronavirus outbreak and global economic turmoil are adding to the strains on privately owned enterprises (POEs) in China and exposing their existing vulnerabilities," wrote Lillian Li, a Shanghai-based senior credit officer at Moody's Investors Service, in a recent note. "Business disruption stemming from business shutdowns and quarantines has the potential to create immediate operational and funding challenges for POEs. These issues add to POEs' long-standing problems, such as limitations in accessing credit [and] the lack of a level of playing field with SOEs," she added.

Ji Guangping, chairman of Jiuyuan Airlines, said in a local media interview in late February following an unusually subdued Lunar New Year holiday period, that the group's budget unit is "basically not making money on any of the routes, not even covering the costs." And on the crucial issue on financing, he said, "We wish there would be more funding channels available."

Juneyao's share price closed at 9.21 yuan on Monday, having dipped as low as 9.06 yuan during the afternoon session in Shanghai, an 8.7% drop from the close on last Friday, after it had already lost 33% of its value since the beginning of the year.