HONG KONG -- China's big three state-owned airlines were not spared when the coronavirus pandemic devastated the global travel industry. Together they racked up 2020 net losses totaling about $5.7 billion, even after an early recovery in domestic traffic.

But robust cargo shipments eased the financial pain. Global trade got a boost from increased demand for goods ordered by consumers buying from home, as lockdowns and restrictions to stop the spread of COVID-19 came into force worldwide.

China last year posted a record trade surplus, underlined by 3.6% export growth, and its gross domestic product expanded 2.3%. While that was the country's slowest economic growth in 44 years, China was one of the few major economies to grow in 2020, along with Taiwan.

The cargo increase was also a boon for China's ocean shippers, logistics services and port operators.

The main culprit was the drop in passengers, especially for international routes. National flag carrier Air China was the hardest hit, recording the largest passenger fall among the three, at 55%, and the biggest net loss of 14.4 billion yuan.

On top of its own dismal performance, the historic loss by affiliate Cathay Pacific Airways -- 29.9% owned by Air China -- further depressed its bottom line. Cathay's situation was even worse than that of its mainland peers, as the Hong Kong carrier does not have domestic routes to fall back on. It recorded its largest-ever net loss of 21.87 billion Hong Kong dollars ($2.81 billion) last year. 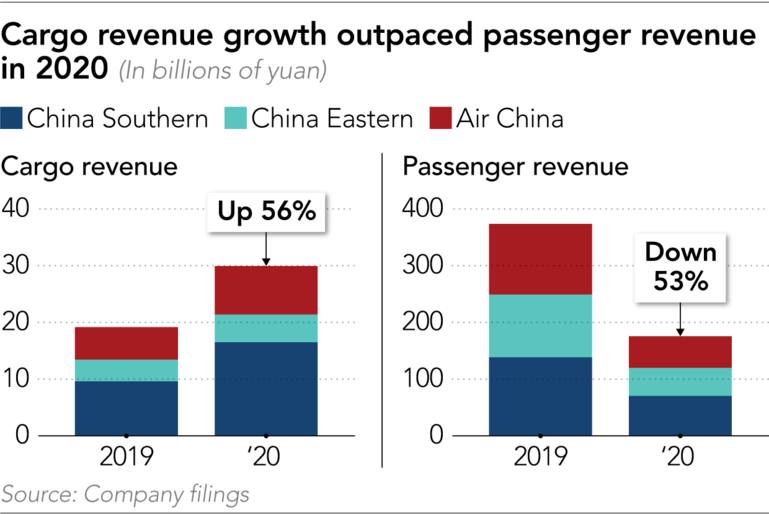 While total passengers carried last year by the mainland trio fell by more than 50%, aggregate revenue was 230 billion yuan, down 45% from the year before. The overall decline in the top line was slightly alleviated by a 56% surge in cargo revenue, while passenger sales dropped 53%.

China Southern -- which became the world's largest carrier by passengers in 2020 as its global competitors drastically cut back their operations due to the pandemic -- increased its cargo revenue by 72% to 16.49 billion yuan last year. Although its total volume was down 17% from 2019 to 1.46 million tons, rising cargo rates boosted revenue.

As the airlines' slashed passenger flights to stem financial losses, their cargo capacity, which relies heavily on the belly space of passenger planes, was significantly squeezed. This squeeze took place against a backdrop of rising demand for air cargo, including shipments of medical supplies. In response, carriers increased cargo-only flights, refitting some passenger planes to carry goods.

"The increase [in cargo revenue] was mainly attributable to the significant increase [in] demand for freight, especially international freight, due to the impact of [the] COVID-19 pandemic," said Xie Bing company secretary for the Guangzhou-based airline, in a statement on Tuesday. Given the continued strength of the cargo segment, the airline's main goal this year is to "optimize the input of freighters and route scheduling, continue to focus on freight flights converted from passenger aircraft, and increase the utilization rate and load factor of freighters," Xie said.

The expanding cargo business has helped airport operators, too.

Shanghai International Airport, the Shanghai-listed administrator of Shanghai Pudong Airport, reported on March 26 that it handled 3.68 million tons of cargo in 2020, 1.4% more than a year ago, while passenger traffic slid 60% to 30.47 million. As the main international gateway to China's largest city, its cargo services -- which are broken up into international destinations and Hong Kong, Taiwan and Macao, increased 4% each for the two categories. Passenger numbers dropped 87% for each.

China's shipping sector also benefited from global growth in marine cargo. Cosco Shipping Holdings, the world's third-largest shipper by fleet capacity, reported on Tuesday that its revenue rose 14% from a year ago to 171.25 billion yuan, while its net profit soared 48% to 9.92 billion yuan. 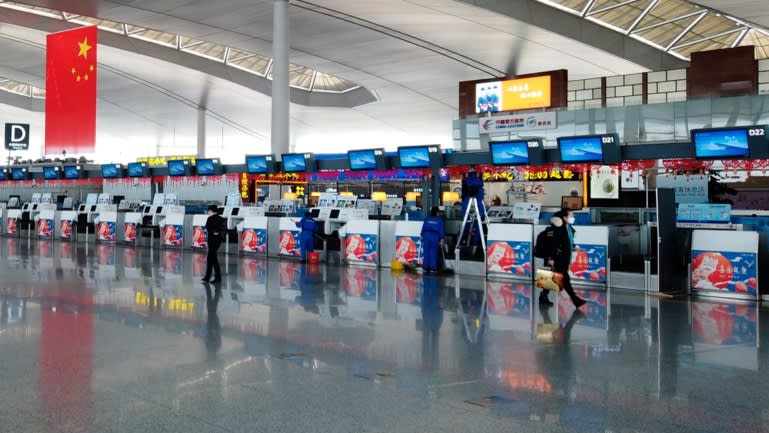 The coronavirus pandemic has devastated demand for overseas air travel and pressured the earnings of Chinese airlines. Few people were seen at Nanjing Lukou International Airport in Nanjing on Jan. 28.    © AP

And as with airlines, cargo demand pushed up rates for seaborne shipping.

For Cosco, a state-owned conglomerate whose businesses range from shipping to port operations, and which derives over 95% of its revenue from container shipping, the total volume carried increased by just 2.4% in 2020 to 26.34 million TEUs, or twenty-foot equivalent units of standardized containers.

"In the second half of 2020, the company took the opportunity of the container shipping market's recovery and added 40 vessels to its global routes, and guaranteed its shipping capacity during the recovery period," Guo Huawei, Cosco company secretary, said in a statement. It had 536 container vessels with a total capacity of 3.07 million TEUs at the end of last year, a 3.6% increase from 2019.

Shanghai International Port Group said Monday that it handled 43.5 million TEUs of maritime containers in 2020, remaining the world's biggest port by volume for the 11th straight year. Its annual revenue fell 28% to 26.11 billion yuan due to the closure of an iron ore port on the Yangtze River by the local government due to environmental concerns.

The upward trend in cargo demand appears to be continuing, as major state-owned logistics supplier Sinotrans on Tuesday issued a positive profit alert, saying that its first quarter net profit is expected to come in between 805 million yuan and 854 million yuan. That would mark a 250% increase from the same period a year ago and higher than the pre-pandemic first quarter of 2019. Li Shichu, company secretary at Sinotrans, in a statement, attributed the outlook to freight rates maintaining a "comparatively high level," among other factors.

Unlike marine shippers, which do not rely on passengers, airlines need them for a full recovery. But the pandemic continues to weigh on international travel.

"Air cargo remains the single bright spot for the Asian carriers," said Subhas Menon, director general of the Association of Asia Pacific Airlines. "Nevertheless, cargo revenue could not offset the collapse in passenger revenue." During the first two months of the year, "Asian airlines carried just 4% of the number of international passengers that flew in the corresponding months of 2019, before the pandemic decimated travel," he said.