Central Japan Railway gave the media a tour of the N700S cars on Wednesday. They will debut on the Tokaido Shinkansen connecting Tokyo and Osaka in time for next year's Summer Olympics in the country.

Other improvements include a 50% larger monitor in each car to display station information, a luggage area between cars and more security cameras, according to JR Central.

For the company's export prospects, the N700S cars carry a standard design, which lets rail operators customize the length of their trains. JR Central will use them in 16-car train sets in Japan but envisions eight-car sets for the U.S. and 12-car sets for Taiwan. 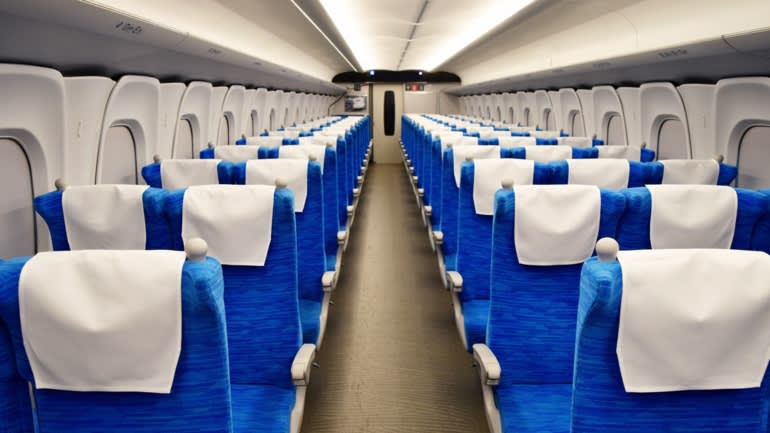 Each of the new cars features a bigger monitor to display station information, as well as power outlets for each passenger. (Photo by Saki Hayashi)

The cars are equipped with a battery drive system for use in an earthquake or blackout, a feature the company describes as a first worldwide in high-speed rail. The system is designed to propel the train to a safe location should its main power supply fail.

Refinements can be found throughout the N700S, from luggage hooks to new reading lights in the premium-seat Green Cars.

"We've put in place the best performance in every aspect," said Masayuki Ueno, deputy head of the company's shinkansen division.

The Tokaido Shinkansen, Japan's most-traveled bullet train line, carried around 466,000 people a day in fiscal 2017, according to JR Central data.