MOSCOW -- State-run Russian Railways is on track to significantly expand its freight business between Japan and Europe via the nearly 9,300 km-long Trans-Siberian Railway.

The company is targeting a 100-fold increase in the number of containers it carries annually between Japan and Europe to 300,000 twenty-foot equivalent units, from about 3,000 TEUs in 2018.

Russian Railways plans to raise the annual transport capacity of the Trans-Siberian Railway by 50% to 180 million tons. It invested more than 47 billion rubles ($745 million) in 2018 alone. It is also working to lay double tracks along the railway and to automate the transport system. The plan is to to lay tracks directly linked to ports in the Far East.

The company is also considering working with the JR group of railway operators to create a door-to-door cargo transportation system between Japan and Europe, and building logistics centers with trading firm Sojitz.

Alexander Misharin, Russian Railways' first vice president, unveiled the company's Japan business strategy, including the ambitious cargo volume target, in a recent interview with Nikkei in St. Petersburg. Misharin called on Japan to actively use the Trans-Siberian Railway, and said that the outlook for Japan's use of the railway is good..

The goal is in line with a plan to strengthen economic ties between Russia and Japan. Transportation cooperation is part of an eight-point plan that Japanese Prime Minister Shinzo Abe presented to Russian President Vladimir Putin in 2016. It also includes developing industries in the Russian Far East and making the region an export base to the Asia-Pacific.

In partnership with Japanese companies like Sojitz and the JR group, Russian Railways aims to cut the time needed to transport cargo between Japan and Europe to 19 days or less, Misharin said.

Rail transport is faster than carrying cargo by ship. It takes about 45 days to ship cargo between Japan and Europe via the Suez Canal. Another advantage of using the Trans-Siberian Railway, Misharin said, is that "rail transportation costs in Russia are among the lowest in the world."

The Trans-Siberian Land Bridge, a service set up with Russian transport company FESCO that caries cargo from the Port of Yokohama in Japan to the Russian Far East by ship, and then on to Europe via the Trans-Siberian Railway, is also expected to be important in increasing transportation cooperation between Russia and Japan. 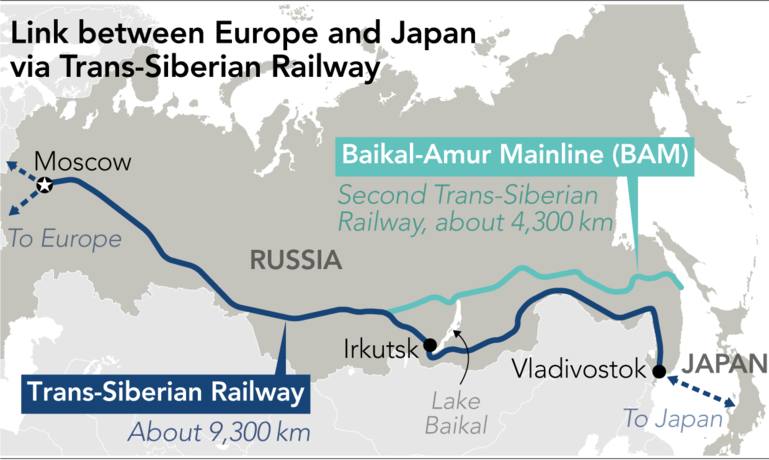 Last year, more than 70,000 TEUs of Japanese cargo -- including goods bound for Russia or transiting through the country -- were carried on the Trans-Siberian Railway, including the Baikal-Amur Mainline, which is also called the Second Trans-Siberian Railway, Misharin said. That was a 10% rise from 2017. Cargo volume is up 12% so far in 2019, year on year, he said, adding that "the types of cargo handled are also diversifying."

But cargo transport is "basically for export and import transactions with Russia." Transit cargo between Japan and Europe totaled only about 3,000 TEUs in 2018, a fraction of the total volume, he said.

"Our challenge is to increase container transit transport. We can boost the number to at least 300,000 TEUs, and as much as 1 million TEUs is possible. The Trans-Siberian Railway is moving for Japan," he said.

On May 24, Russian Railways signed a memorandum of understanding with Russia's Transport Ministry, Japan's transport ministry and the Trans-Siberian Intermodal Operators Association of Japan. Under the agreement, which aims to promote the use of the Trans-Siberian Railway, the partners next year will extend to Europe a demonstration cargo transport project set up by Japan and Russia the previous year.