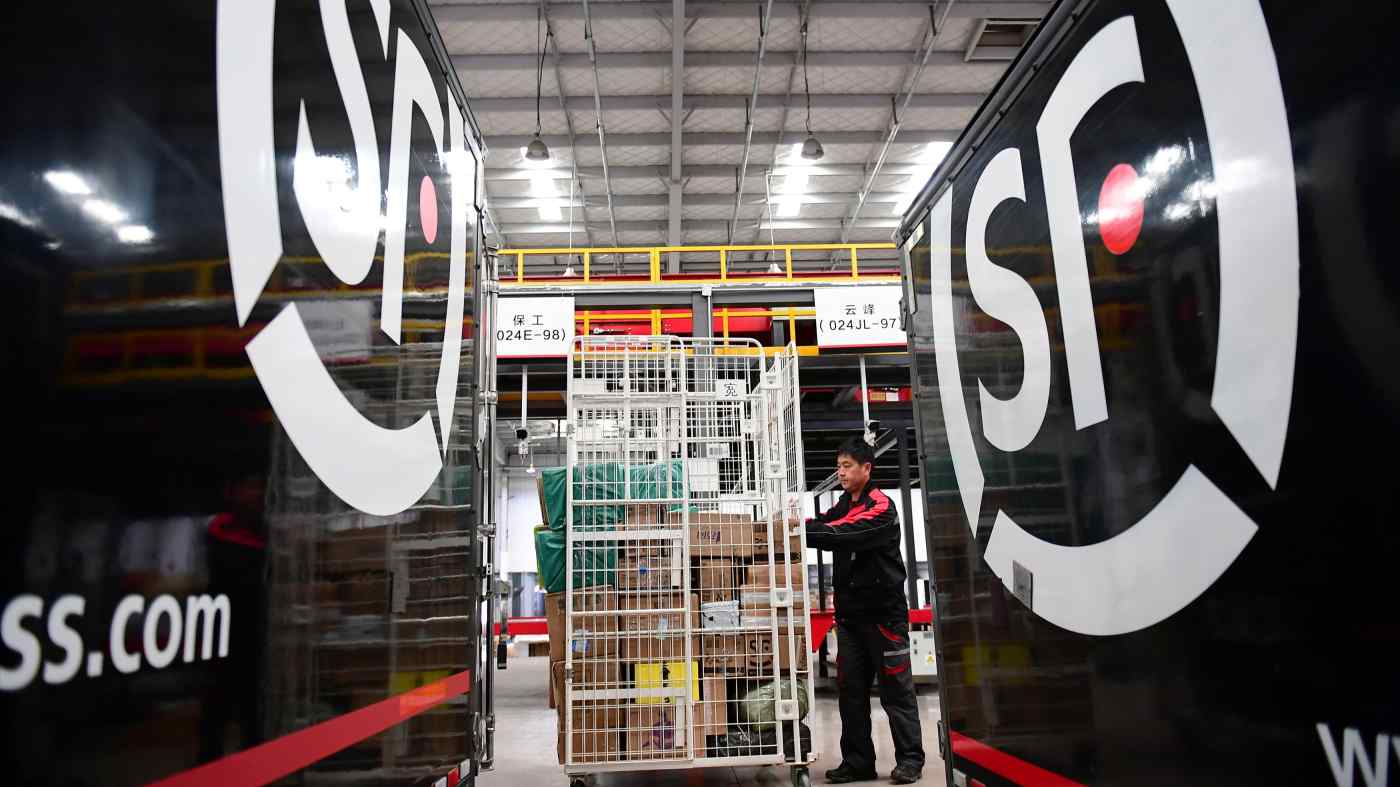 HONG KONG -- SF Holding said on Wednesday that it will acquire a controlling stake in Kerry Logistics Network in a deal valued at 17.55 billion Hong Kong dollars ($2.26 billion), marking a major advance for the Chinese courier company into the wider Asian region.

SF will purchase 51.8% of the Hong Kong-listed pan-Asian logistics service provider, the companies said in a statement to the Hong Kong Stock Exchange. Shenzhen-listed SF said it will pay for the acquisition through loan funding.

Kerry Logistics and its Hong Kong-listed parent, Kerry Properties, said they have agreed to the deal, and that Kerry Group companies will retain a certain portion of the logistics unit.

"We believe forming an alliance will definitely be beneficial for our competitiveness in the future," Wang Wei, chairman of SF, told reporters at a news conference on Wednesday. Wang, also known as Dick Wong, revealed that the companies had been talking for more than three years, but "the international situation and the current competitive environment accelerated negotiations," he said.

The Chinese company is keen on adding Kerry Logistics' wide global network with its presence in 59 countries and regions, particularly in Asia, an area where a growing number of SF's mainland Chinese clients are expanding. Kerry Logistics Chairman Kuok Khoon Hua said he found "a lot of strength and synergy" in the deal. Kuok, who shared the stage with Wang, praised his counterpart's accomplishments for building "an admirable business in mainland China" in which Kerry Logistics is now able to take advantage.

SF has the largest cargo freighter fleet in China, and the country is where its big customer base does most of its business. In return, Kerry Logistics can help SF step beyond China, as "the international arena is where we are playing in for a very long time," said Kuok, the youngest son of ethnic Chinese-Malaysian tycoon Robert Kuok Hock Nien.

Following news reports of the potential deal, Daiwa analyst Kelvin Lau on Friday wrote that it would benefit both companies. "With the SF alliance, Kerry is likely to get access to the vast mainland [China] network through SF."

"On the other hand, SF would benefit from [the] regional and overseas network of Kerry, especially Kerry's strong local express delivery network in Taiwan, and ASEAN countries such as Thailand, Vietnam and Malaysia," Lau said.

Kerry Logistics has an especially strong foothold in Thailand, where it listed its parcel delivery unit Kerry Express Thailand this past December.

After the acquisition by SF is completed, Kerry Group's stake in its logistics arm will decrease from 62.9% to roughly 30%, depending on the number of independent investors who sell their shares. To retain a Hong Kong listing, Kerry Logistics needs at least 15% of its total shares to be held by the public.

Even though the deal is labeled as a "cooperation" and not an "acquisition," Kerry Group might not retain even one-third of the stake if more-than-expected retail investors sell their shares of Kerry Logisitics.

"The situation is fluid, depending on how many public, independent shareholders tender. That affects our shareholding," Kuok said. But he added, "We [would] love to be a third."

As long as Kerry Group companies hold a stake of 10% or higher in the logistics provider, it will be able to appoint three of the seven board members, not including independent directors.

Meanwhile, two Kerry Logistics units will not come under the new alliance with SF.

The first is its logistics business in Taiwan, which will be sold to Kerry Holdings -- one of the controlling shareholders of Kerry Logistics -- for 6.7 billion New Taiwan dollars ($239.3 million), including loans and other liabilities.

The second is Kerry Logistics' seven warehouses in Hong Kong, which will be sold to Kerry Holdings, for HK$13.5 billion. The proceeds for that transaction will be used as a special cash dividend of HK$7.28 a share to existing Kerry Logistics' shareholders before the completion of the deal.

The stock market responded positively to Wednesday's announcement. While the offer price for Kerry Logistics is HK$18.80 a share, a discount of 19.8% to last Thursday's closing price before the shares were suspended, the stock rose 5.5% to HK$24.75 on Wednesday, as investors took into account the dividend offer.

SF shot up 10% in Shenzhen, hitting the daily limit, closing at 117.10 yuan. The company's shares also were suspended after last Thursday's trading pending an announcement.

Wang, who also is a director of Greater Bay Airlines, hinted at future synergy between the logistics group and the newly established Hong Kong-based airline.

"For all future opportunities, I will definitely act as a bridge to create more resources and cooperation opportunities for the shareholders on both sides," he said. The capital structures for the airline and the logistics group are completely independent from each other, he said.

Wang added that there will not be any layoffs after the acquisition, because the businesses of the two companies do not overlap much due to the extensive global and Asian logistics markets.

"The logistics market in mainland China amounts to trillions [of yuan]. Kerry Logistics and SF comprise only about 10 billion in terms of revenue," he said. "We don't even have enough time to employ more people, how could we lay off our employees?"

Kerry Logistics has 42,000 employees, while SF employs about 700,000, primarily in mainland China.

"It's not sexy, but the digital upgrades and global expansion of China's logistics giants is a big, big tech story," Jeffrey Towson, a private equity investor and former professor at Peking University, wrote on Twitter. "They are pioneering digital and increasingly smart logistics infrastructure in China. And expanding their supply chains globally."

The loss of control by Kerry Group of its logistics business appears to have outweighed the merit of teaming up with a Chinese partner with solid footing in the country, considering the future prospects of the industry.

Kuok said that he had consulted with his father and family as "we are a family company," and that he was given a green light to proceed with the deal.

"It's really just a realization going forward in the logistics sector that you need a certain scale, as technology is going to be an inalienable part of being able to satisfy customer needs," he said. "We see China and Asia to be the growth driver in five to 10 years and beyond."