YANGON -- The opening of a new bridge between Thailand and Myanmar has pushed Southeast Asia one step closer to the realization of an East-West Economic Corridor, connecting the South China Sea to the Indian Ocean.

The corridor, which passes through Vietnam, Laos, Thailand and Myanmar, is set to reshape the supply chains of the Mekong region, which also includes Cambodia, giving it access to the vast Indian market.

The new trade route will perhaps also alleviate some of the region's economic dependence on China.

The second Thai-Myanmar Friendship Bridge, which connects Myawaddy, a city in the eastern region of Myanmar, and the Mae Sot district of Thailand's western region, was officially open to traffic late October. The bridge was built at a cost of about $140 million, according to the Thai government.

The distribution of goods will become smoother on this new highway link as it allows trucks to bypass urban areas, a Myanmar government official said. 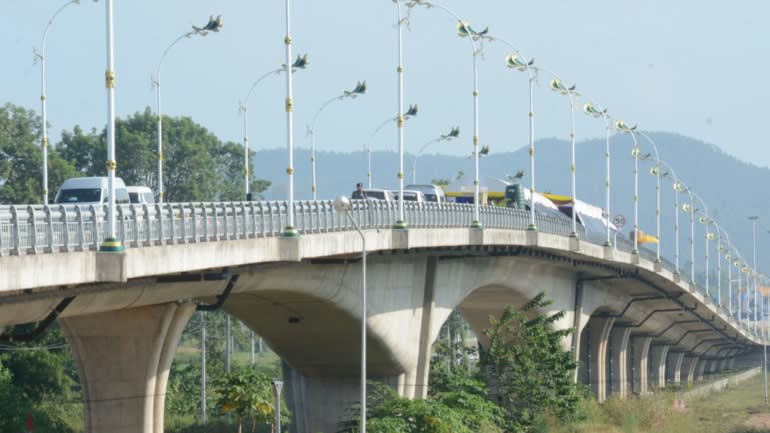 The East-West Economic Corridor is a project to build a large economic bloc from Vietnam to Myanmar via Laos and Thailand. (Photo by Yuichi Nitta)

The East-West Corridor is a project to build a large economic bloc along a 1,700-kilometer land route from Vietnam to Myanmar via Laos and Thailand. From there, access can be gained to India over the Bay of Bengal.

Mawlamyine in eastern Myanmar was initially designated as the western end of the corridor. But the corridor has been extended to Yangon, the biggest city in Myanmar, and will be linked to the Thilawa Special Economic Zone under development with Japanese oversight. Toyota Motor is building a plant in the zone.

Along with the opening of the new bridge, Myanmar and Thailand have begun testing their Cross-Border Transport Agreement, which allows vehicles from both sides across the border. The accord enables the two countries to issue licenses to logistics companies to directly transport goods between the Thilawa SEZ and Laem Chabang Port, Thailand's largest maritime port. 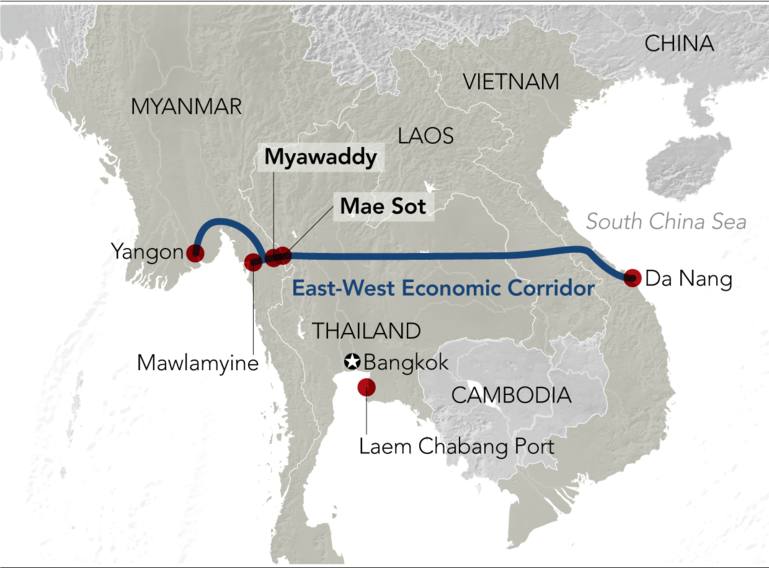 Nisshin Transportation, an Osaka-based company that is part of Japanese international transporter AIT, is planning to launch direct services on the route together with its local partner. Direct transport will cut delivery times to Bangkok from Yangon to as little as three days, said a Nisshin official.

The construction of an arterial road is also ongoing in Vietnam, Laos and Thailand.

Even in Myanmar where construction work had been hampered by ethnic conflicts in the border area, there has been progress. The development of a 90 km section began about two years ago, backed by loans from the Asian Development Bank. The Myanmar government expects the road to open to traffic in 2021.

Upon the completion, overland transportation between Thailand and Myanmar will take less than 24 hours. "The industrial development of Myanmar will accelerate as supply chains will be connected," said Toshihiro Kudo, a professor at Japan's National Graduate Institute for Policy Studies.