TOKYO -- Traffic resumed in the Suez Canal on Monday evening after the gigantic container ship that had been stuck in the waterway was dislodged.

But it was only after the 400-meter-long behemoth had clogged the vital trade artery for nearly a week, causing a backlog of more than 400 ships waiting to cross, and hefty losses.

The accident, which blocked traffic through the shortest maritime route between Europe and the lands lying around the Indian and western Pacific oceans, has highlighted a huge potential risk for a business that supports immense daily flows of goods around the world.

For trade-oriented Japan, maritime transportation is the lifeblood of its economy. On any given day, numerous ships are carrying vital oil and food imports to Japan as well as cars, computer chips and other exports from the country.

Disruptions in this crucial network of maritime transportation could occur not just in the Suez Canal but also in many other maritime choke points.

Shoei Kisen, the Japanese owner of the Ever Given, the container ship that blocked that all-too-important passageway, said last week that the sheer weight of the ship -- 170,000 tons -- was "making the work to free the vessel difficult."

Many people may wonder why such a maritime juggernaut was passing through the narrow shipping lane in the first place.

The explanation is the rapid growth in global demand for container transportation in recent years.

The first two decades of this century have been marked by sharp expansion of global supply chains involving a growing number of ascending new economic powers like China as well as major industrial nations. Trade volumes have soared as a result.

The number of containers handled at ports around the world grew 260% in the 18 years since 2000 to nearly 800 million twenty-foot equivalent units (TEUs). 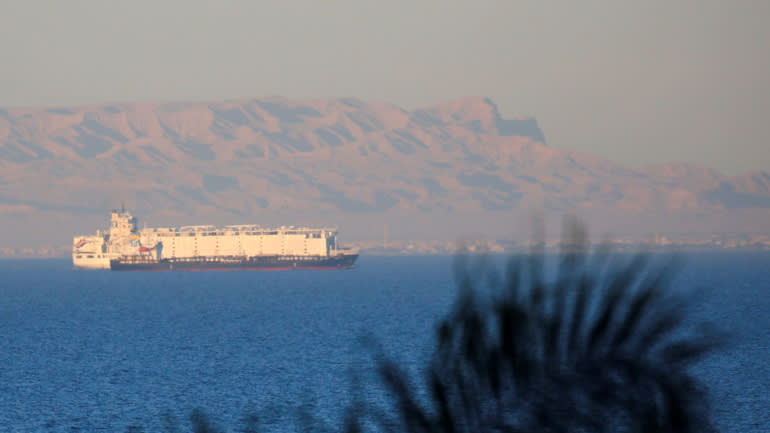 A container ship sails through the Gulf of Suez in the Red Sea to the Suez Canal in March 2018.   © Reuters

Excluding Japan, Asia accounted for 370 million of those 800 million TEUs, a 360% jump from 2000, as the amounts of energy and metal resources carried to the region ballooned.

In response to the trend, shipping companies have been making bigger and bigger vessels, which are generally cheaper to build and operate on a per-container basis.

Japanese shipping giants operate some of the biggest container ships, capable of carrying around 20,000 containers.

In the 2000-2005 period, when China started gobbling up resources imported from various parts of the world, the largest container ships could carry 7,000 to 8,000 containers. The capacity of today's largest ships is nearly three times that.

The trend has not been limited to container ships. Bulk carriers, designed to transport unpackaged bulk cargo, such as grains, coal and ore, as well as LNG carriers designed for transporting liquefied natural gas, have also grown sharply in size.

To allow larger ships to pass, the Suez Canal and the Panama Canal, which connects the Atlantic Ocean with the Pacific Ocean, were widened in 2015 and 2016, respectively.

While larger ships provide for higher transport efficiency, they inevitably pose bigger risks when they get embroiled in an accident.

Dislodging the Ever Given, wedged between the banks of the Suez Canal, took nearly a week. The accident also caused massive disruptions and backlogs in global shipping.

Even in normal operation, ultralarge vessels tend to cause serious traffic jams at points of natural congestion along important passages.

When demand for LNG surged in Asia last winter due to severe cold waves, many ships got stuck in the Panama Canal, which cuts across the narrow Isthmus of Panama to connect the Caribbean Sea with the Pacific.

Such congestive pathways in some of the world's famous shipping routes also include the Strait of Hormuz, the channel linking the Persian Gulf with the Gulf of Oman and Arabian Sea. It is of huge strategic and commercial importance because oil tankers and LNG carriers from Persian Gulf ports in major oil- and gas-producing countries like Saudi Arabia, the United Arab Emirates and Qatar must pass through the strait.

The International Maritime Organization has set up what is known as the Traffic Separation Scheme in the Strait of Hormuz, a traffic lane that is 6 nautical miles (11.1 km) wide, subdivided into 2-mile lanes for inbound and outbound traffic, separated by 2 miles.

While a 2-mile lane is still wider than the narrowest point of the Strait of Malacca, which links Asia with the Middle East and Europe, tankers have to turn almost at a right angle in one of the lanes in the Strait of Hormuz, according to a shipping industry executive.

A missile attack or a mine could block the passageway, which the U.S. Energy Information Administration calls "the world's most important oil transit choke point." In 2018, its daily oil flow averaged 21 million barrels per day, the equivalent of about 21% of the global consumption of petroleum liquids, according to the EIA. More than 80% of crude consumed by Japan passes through the strait.

The Strait of Malacca is another key shipping lane for world trade, especially for countries like Japan, China and Indonesia. Petroleum and other liquids passing the Strait of Malacca reached 16 million barrels per day in 2016, making the passageway the second-largest oil trade choke point in the world, after the Strait of Hormuz, according to the EIA.

The Japanese Shipowners' Association is keenly aware of risks to their industry posed by these choke points, saying, "While the Strait of Hormuz is facing geopolitical risks, the Strait of Malacca also poses serious operational challenges to ships due to meteorological and geographical factors."

Japan is far more vulnerable to these shipping risks than the U.S. because the country's key imports and exports, such as oil, LNG and vehicles, are mostly transported by sea.

How to protect the security of the key choke points to ensure safe shipping operations through them amid growing geopolitical risks is a question of survival for Japan.