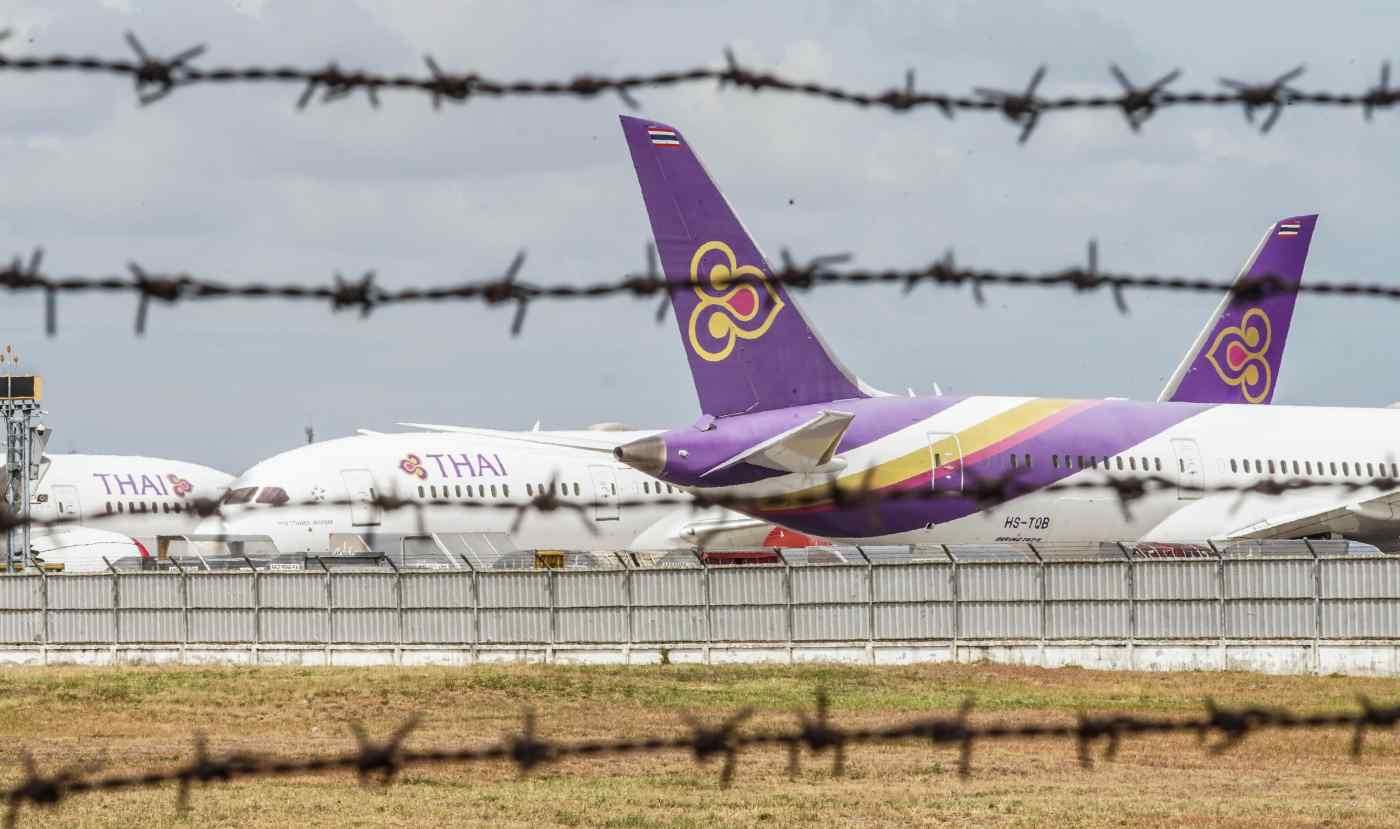 Thai Airways aircraft are parked at Suvarnabhumi airport in Bangkok after the company has suspended most of its international and domestic passenger services. (Photo by Akira Kodaka)
MASAYUKI YUDA, Nikkei staff writerApril 23, 2020 14:13 JST | Thailand
CopyCopied

BANGKOK -- Thai Airways International, a listed state-owned enterprise, is dangerously close to becoming the world's first national flag carrier to go bust amid the coronavirus pandemic, with only days left to maneuver out of its latest financial straits.

Down to its last 10 billion baht ($307 million), according to local reports, which is enough to pay its employees for one month, the airline is in talks with the Thai government regarding a bailout.

To tide itself over during the emergency, the carrier has requested that the government approve a 70 billion-baht bridge loan, with the Finance Ministry as a guarantor, ministry sources told the Nikkei Asian Review.

"Finally, it will be the Ministry of Finance's burden to seek a way to bail out Thai Airways," said an analyst at Asia Plus Securities who asked not to be named. Thai Airways made the request based on the hypothesis that the pandemic will be contained by October.

"I still would like to see Thai Airways as the national flag carrier," Deputy Prime Minister Somkid Jatusripitak said, "because that is the way things have been for a long time."

Somkid was speaking last week during a special meeting held to discuss the airline's future. As the chair of the meeting, the deputy premier ordered Thai Airways and related agencies to set up a working group to come up with a rehabilitation plan. Whether the national flag carrier would remain as a state enterprise depended on the quality of the plan, Somkid warned. The meeting was also attended by officials from the Finance Ministry and Transport Ministry, as well as representatives of state-owned oil company PTT and other private Thai conglomerates such as food processing and telecoms group Charoen Pokphand, retail collective Central Group, and beverage and real estate outfit TCC Group.

A solution must be finalized this week, or before the cabinet decides the airline's fate at a meeting that could be held as early as April 28.

Some analysts expect Thai Airways to offer new shares for the first time in 10 years. Fellow state enterprises like Airports of Thailand and PTT are reportedly considering investing in the airline. From the private sector, TCC Group, run by Charoen Sirivadhanabhakdi, Thailand's third-richest man, has also been mentioned as a potential investor.

Privatizing the national flag carrier, however, may prove difficult. Thai Airways is important for Thais going abroad, including King Maha Vajiralongkorn, who spends most of his time in Germany. This will likely remain so even after the pandemic. If the company survives.

Finance Minister Uttama Savanayana on Apr. 16 said the sale of the national flag carrier to the private sector was not discussed at the special meeting. Although the PTT and AOT both denied the rumors, it is likely that one or more state enterprises may end up lending a helping hand to the carrier.

Thai Airways is not the only Asia-Pacific airline in trouble as the pandemic all but shuts down international tourism. Virgin Australia Holdings, which held one-third of its home continent's aviation market, on Tuesday entered voluntary administration, which means directors have admitted that the company is out of money and have handed it over to insolvency administrators.

This is equivalent to Chapter 11 bankruptcy provision in the U.S.

Before the virus hit, Thai Airways was also experiencing a slump. The airline announced a net loss of 12 billion baht for 2019, its third straight year in the red. Total shareholder equity was 11.7 billion baht at the end of 2019, down 42.5% from the previous year. Compared with the end of 2010, when the airline most recently raised capital, total shareholder equity has decreased by 84.5%. 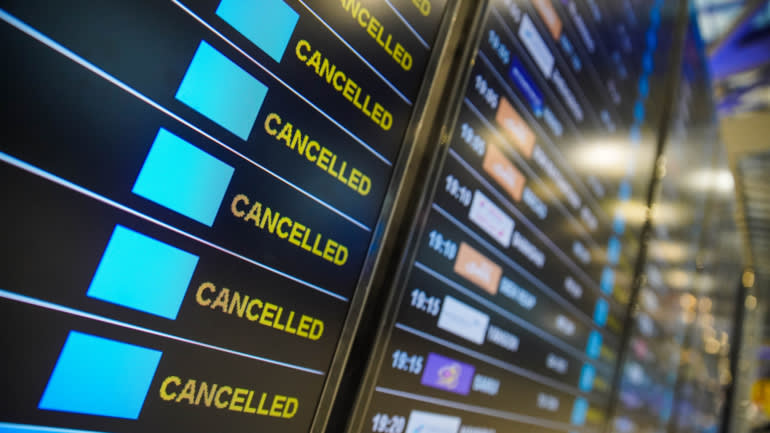 Since the coronavirus outbreak, Thai Airways has suspended most of its international and domestic passenger services, cutting itself off from its main source of revenue. (Photo by Akira Kodaka)

Since the coronavirus outbreak, demand for air travel has plummeted and stringent measures to prevent the spread of COVID-19 have been put in place. As a result, Thai Airways has suspended most of its international and domestic passenger services, cutting itself off from its main source of revenue.

Acting President Chakkrit Parapuntakul, who took over after previous President Sumeth Damrongchaitham's resignation was approved in mid-March, has asked 22,000 of the carrier's employees to take leave and accept monthly salary cuts, which are as high as 50% for executive vice presidents and 10% for entry-level employees who make less than 20,000 baht a month.

Also in March, Moody's Investors Service warned that few airlines would be able to survive if their jets remained on the ground for five to six months. The credit agency urged governments to financially support carriers that might not otherwise survive.

Banyong Pongpanich, chairman of Phatra Capital and Phatra Securities, has suggested that the Thai government should increase its share in the airline, of which it currently owns 51%. Banyong, who is a former board member at Thai Airways, said the airline would need to raise at least 50 billion baht to operate normally again.

The airline has hit a roadblock in its maintenance business as well. It had hoped to partner with European jet maker Airbus to set up a repair facility at U-Tapao International Airport, 140 km southeast of Bangkok. The project was to be a first-class, reasonably priced repair center and was a key project for the government’s Eastern Economic Corridor special economic zone.

But an executive from Thai Airways revealed that Airbus has pulled out of the 11 billion baht project, declining to present its joint-venture proposal by the Monday deadline, according to The Nation. The local English-language newspaper reports that the airline is in search of a new partner, as the repair center is essential to Thai Airways' hopes for a financial turnaround.

Finding itself in something of a political straitjacket, Thai Airways will not survive if the liquidity crisis is not solved by a serious restructuring and by its transformation into a private company, according to Kitpon Pripaisarnkit, director of analysis and strategy at UOB Kay Hian Securities. "Thai Airways must be a private company to allow management to be more agile," he said.