BANGKOK -- Thai Airways International reported its largest-ever net loss of 141 billion baht ($4.7 billion) in 2020 on Thursday, ahead of the submission of its court-supervised rehabilitation plan next Tuesday.

As a result of the record loss, the airline group's shareholder equity dived from 11.7 billion baht to minus 128.6 billion baht, leading to the suspension of trading in Thai Airways shares on the Stock Exchange of Thailand from Thursday morning.

"SET is considering whether the company is subject to possible delisting because of negative equity and will determine this issue within 7 business days or within March 8, 2021," the stock exchange said in a notice to investors.

The airline carried 76% fewer passengers and 72% less cargo by volume last year. An impairment loss of 82.7 billion baht on its aircraft and parts, due to the lack of a quick recovery in passenger demand, also contributed to the increase in the net loss. 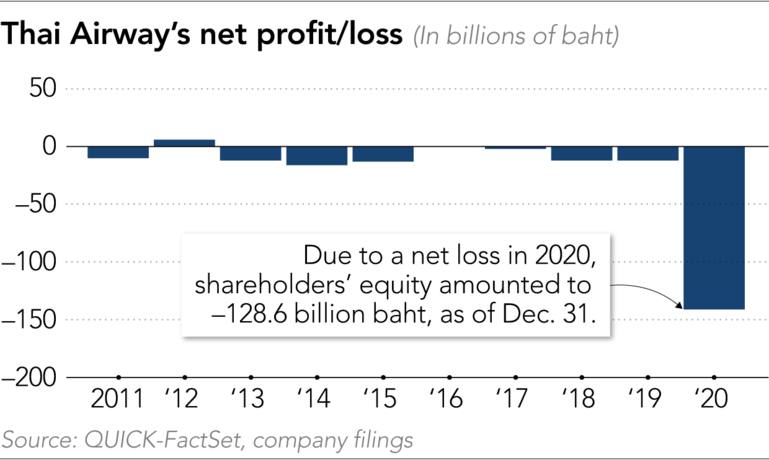 The weak showing dented the group's balance sheet. Its cash and cash equivalents dropped 60% to 8.6 billion baht during 2020. Its total assets fell 18% to 208 billion baht. Total liabilities expanded 39% to 337 billion baht due to a 52% increase in its long-term liabilities.

The results suggest the national flag carrier's cash shortage has become more serious. In January, the airline announced that it had raised 2.7 billion baht by selling a 15.5% stake in Bangkok Aviation Fuel Services, which provides airplane fueling and other services. The proceeds will serve as working capital for the near term.

According to local reports, the company also plans to sell its 13.3% stake in domestic budget airline Nok Air and five Boeing 737-400 engines. The company's website lists its training center building near Don Mueang airport in northern Bangkok as up for sale.

Selling off assets in pieces will provide only a brief respite for the cash-strapped airline. The court-supervised rehabilitation plan to be submitted Tuesday for creditors' approval requires the company to find stable sources of funding through the rehab period. Thai Airways will have seven years at most to implement the plan.

Such stable funding could include issuing new shares or making a deal with banks for financial support. Meanwhile, the airline must streamline the organization to lower costs.

When Deputy Prime Minister Supattanapong Punmeechaow met with planners earlier this month, he expressed dissatisfaction with the quality of the plan. "We need to do a lot more homework and weigh the information we have carefully to pinpoint the airline's real debt-servicing capacity," he said.