Thai Airways to halve workforce to become profitable by 2025

Thai Airways was one of the world's first major airlines to seek the protection of a bankruptcy court due to COVID-19 travel restrictions.   © AP
MASAYUKI YUDA, Nikkei staff writerMarch 2, 2021 18:23 JSTUpdated on March 2, 2021 21:30 JST | Thailand
CopyCopied

BANGKOK -- Thai Airways International announced on Tuesday that it would downsize its operations significantly by cutting 50% of its workforce and its aircraft in operation from 102 to 86 as part of a rehabilitation plan that it submitted to the Legal Execution Department in the Ministry of Justice earlier in the day.

The rehab process will see the airline's number of full-time employees reduced from 27,944 as it stood in 2019 to between 13,000 and 15,000. Efforts to redesign the organization and revamp compensation will bring the proportion of total flight revenues that are taken up by crew costs down from 23% to 13%, the carrier said.

The financially battered-airline will aim to be in a stable state of profitability by 2025 through the restructuring measures and assuming that air travel recovers to normal levels by 2024.

The company, however, did not mention concrete measures to secure stable sources of funding through the rehabilitation during a news conference held on Tuesday, even though an executive told reporters that it will have to raise 50 billion baht ($1.65 billion) of working capital to operate the company for the next two years.

Nor did it ask creditors to write-off any of its debt. Thai Airways' plan may appear insufficient in terms of addressing issues on financial restructuring.

The airline first asked the court to supervise a rehabilitation plan back in May 2020, becoming one of the world's first major airlines to seek legal relief due to massive financial damage brought on by COVID-19 travel restrictions.

The motion was accepted in September, but the airline has since slipped further. According to its 2020 financial results, released on Thursday, the legacy carrier recorded its worst-ever net loss, 141 billion baht, as the COVID-19 crisis decimated its revenues, bringing its shareholder equity to minus 128.6 billion baht as of December, down from 11.7 billion baht a year earlier. Trading of Thai Airways' shares was halted on Thursday morning due to the airline's negative shareholder equity. "The Stock Exchange of Thailand is considering whether the company is subject to possible delisting because of negative equity and will determine this issue within seven business days or [by] March 8, 2021," the stock exchange said in a notice to investors.

Regarding improving the balance sheet -- one of the biggest challenges for Thai Airways -- the rehabilitation plan only requested a 6-year extension on debenture redemptions. Banks will be asked to give 3-year concessions on repayment without urging any write-offs. "If we would insist debt relief, the plan would not pass," an executive said when asked why the airline did not ask for write-offs.

On fundraising, an executive only mentioned that the company seeks to raise funding by various options, including issuing new shares to preferentially sell to creditors.

He also hinted that the Thai government may be interested in investing in new shares. The Ministry of Finance sold a 3.17% stake in the airline in 2020 to lower its total holding below 50%. The move rescinded the airline's state-enterprise status, which had been a burden for past reform attempts due to strongly protected rights of state-enterprise workers.

Most of Asia's airlines have also suffered hardships from the travel restrictions, but Thai Airways was already in a precarious financial position as its profitability had eroded over the years. In the past decade, Thai Airways earned a net profit only twice, in 2012 and 2016.

The final creditors' meeting is scheduled for May 12 and/or May 19 to consider and vote on the plan. Up to three days before the meeting, planners or creditors can propose amendments to it. In June or July, the court will hold a session to judge the plan according to the vote.

If the plan is approved by creditors, the national flag carrier will have at least five years to implement it. Under the rules, the execution of the plan can be extended for a year no more than twice. This could drag out the process to seven years.

Thai Airways will need to show it can improve its organizational profitability to win endorsement from holders of at least 50% of its debt. 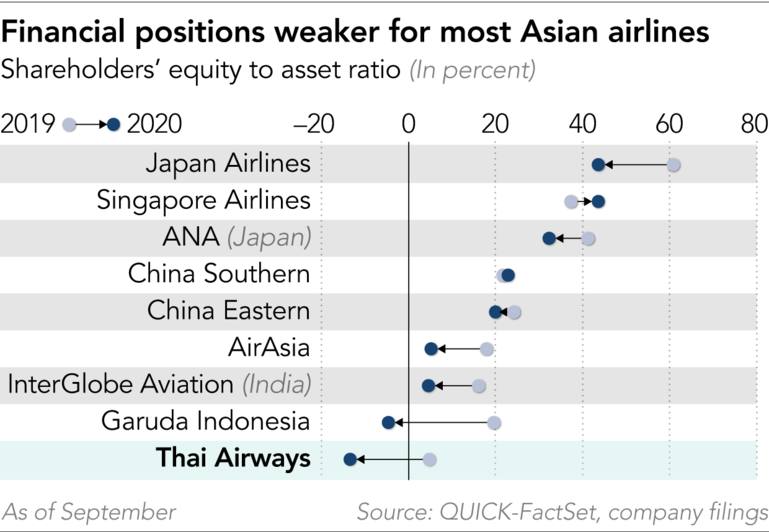 Other Asian carriers to fall on hard times pre-COVID include Japan Airlines, which went through a thorough rehabilitation after a bankruptcy filing in 2010. Thai Airways now faces similar challenges with its aging aircraft and highly paid staff.

Its capital deficit as of December was $4.2 billion, about half of the roughly $9 billion that Japan Airlines was buried under when it went bankrupt.

Eleven years ago, commercial banks were asked to write off 87.5% of their Japan Airlines receivables. Japan's oldest airline -- it was established in 1951 -- was forced to cease flying roughly 40% of its international routes and 30% of its domestic routes. It reduced its fleet by 30%, laid off 16,000 employees and took other cost-cutting measures.

Japan Airlines' plan might offer perspective for Thai Airways' creditors, especially listed ones, as they decide if they can accept the rehabilitation plan and sell their shareholders on it.

To show current management's commitment to restructuring the organization, Thai Airways has been releasing its reform plan in bits. On Feb. 19, it announced the elimination of more than 30% of its executive positions.

In addition, it has shed around 10% of its workforce, or 2,202 employees, through an immediate early retirement program that management proposed last year. 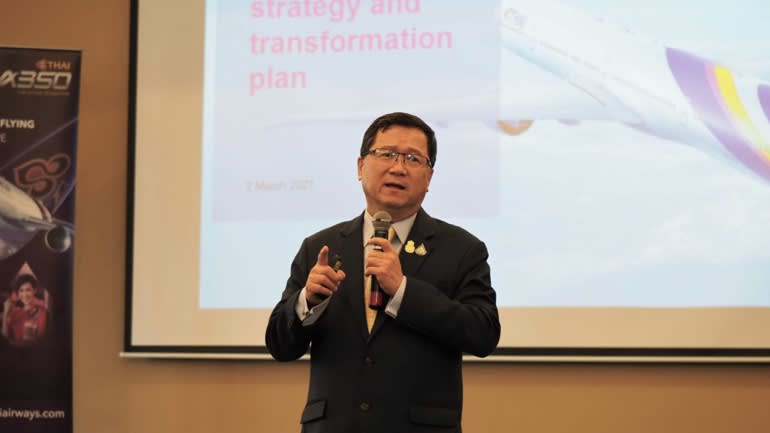 In September, an investigative panel commissioned by the Ministry of Transport found that corruption among management and workers led to the company's woes. "The main cause of this chronic issue is the procurement of 10 aircraft," said Deputy Transport Minister Thaworn Senneam, who was party to the panel. Thai Airways "has been making losses [on these aircraft] since their inaugural Bangkok to New York flight in July 2005 up until their decommissioning in 2013, and they remain a burden for maintenance costs even today."

The panel found evidence that bribes of at least 2.6 billion baht were paid to politicians, officials and Thai Airways' executives in connection to the purchase of the 10 jetliners, according to a report published by the panel.

In addition, price discrepancies of as much as 589 million baht in operating leases on eight Boeing planes were uncovered. The panel believes the gap explains some $7.2 billion in bribes that Rolls-Royce pushed through middlemen to officials and airline executives for the purchase of engine parts and the payment of a flat rate for repair and maintenance services.

The panel also pointed out that some workers' rights were overprotected and their paychecks were not monitored properly. It found some employees reporting unrealistically long overtime hours. Frequent managerial reshuffles in line with political swings and the re-employment of air force officers regardless of their business experience are also widely seen as key reasons for the carrier's financial crisis.