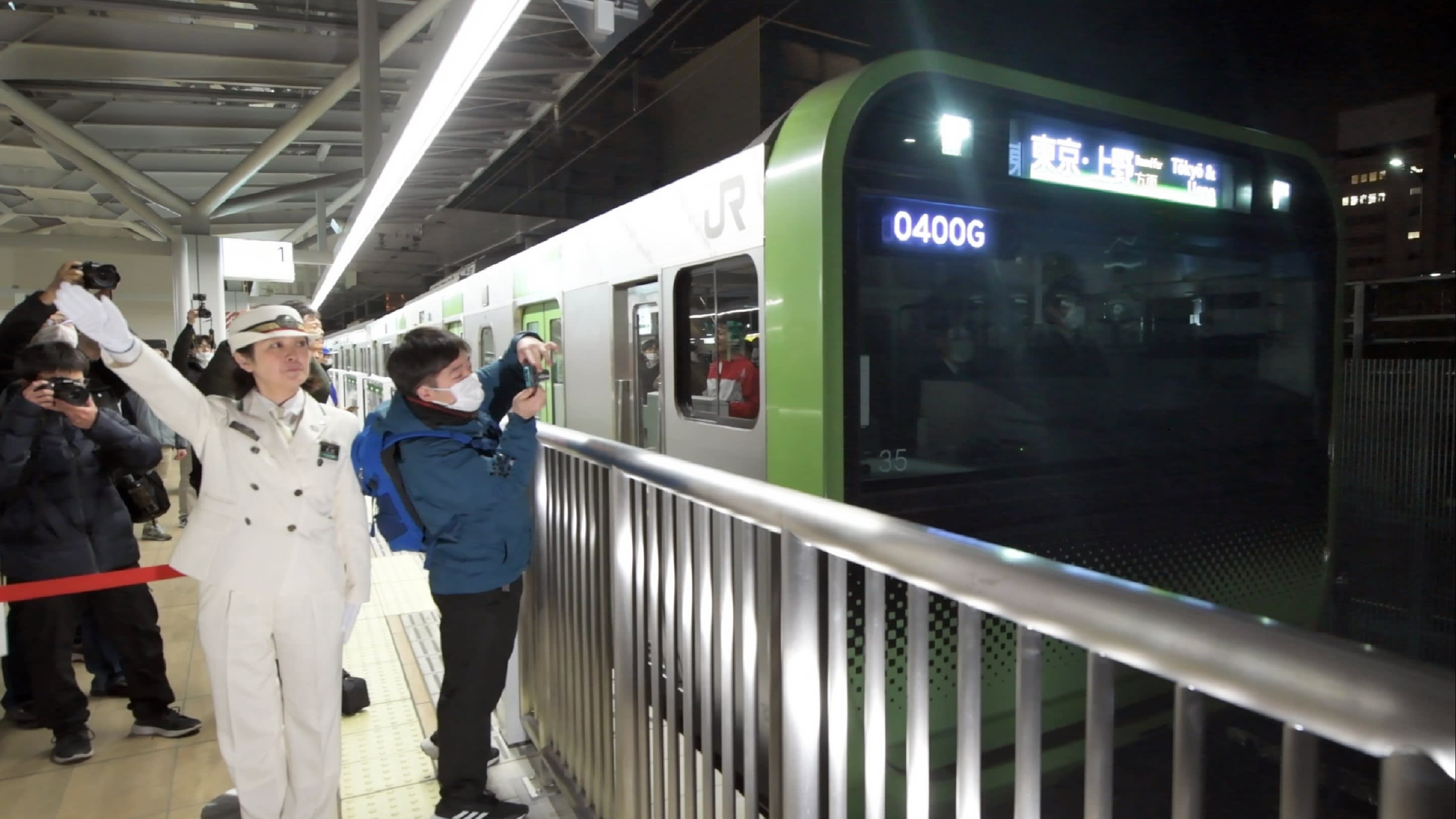 Takanawa Gateway is about to send off its first train as it joins Tokyo's Yamanote Line on Saturday. (Photo by Konosuke Urata)
Nikkei staff writersMarch 14, 2020 13:58 JST | Japan
CopyCopied

TOKYO -- The Yamanote Line, which circles the Japanese capital, on Saturday opened its first new station in almost 50 years. Takanawa Gateway Station sits between Tamachi and Shinagawa stations and is initially expected to serve about 23,000 passengers a day.

The Yamanote Line connects Tokyo's major hubs, including Tokyo, Shinjuku, Shibuya and Ikebukuro stations. Shinagawa Station is included in the list; it is a shinkansen stop and serves as a transit point for commuters heading to Haneda Airport.

East Japan Railway, the operator of the busy loop line, plans to begin redeveloping the area surrounding the new station in the fall. A commercial complex, hotel and office buildings are expected to be completed in 2024 at the earliest. The project is expected to increase the station's daily passenger count to about 123,000.

By 4:15 a.m., the Yamanote Line's 30th station had 350 railroad otaku waiting for it to open. When the first train pulled up 20 minutes later, they broke out in applause.

Nearly five hours later, the crowd had swelled to 6,000. A sixth-grade boy from neighboring Saitama Prefecture was smiling at "the cool" roof and floors that he said are "totally different" from other stations.

The boy's school is now closed due to the coronavirus scare, and the sixth-grader said he was enjoying his first outing in a while. Railroad enthusiasts gather outside the Yamanote Line's newest station hours before the first train rolled out on the morning of March 14. (Photo by Konosuke Urata)

The station was designed by renowned architect Kengo Kuma. Its large roof, inspired by origami, uses cedar wood for the interior to lend a Japanese ambience.

Station manager Taka Nakamura told reporters she was pleased to have so many enthusiasts stop by to celebrate the opening. No ceremony was held due to the outbreak of the new coronavirus, which has many Tokyoites shunning crowds.

The new station is not only a transportation hub but also a venue for testing new technology in a public setting. Robots will sweep the floors at Takanawa Gateway Station every night, covering about 2,000 sq. meters. (Photo by Taro Yokosawa)

It features an unmanned convenience store that will open on March 23. The store will have no counter; customers will grab and go with what they want. Cameras detect what has been picked, like at Amazon GO locations and similar stores in China.

Robots play main roles at the station. Six types are on cleaning and security detail.

Four types of digital information boards make use of artificial intelligence to help passengers find where they are going.