A SpiceJet seaplane lands in the Sabarmati river. Also called hydroplanes, these aircraft can land on water, meaning they can access rugged terrain and other areas where building a landing strip may not be an option.   © Reuters
AKIRA HAYAKAWA, Nikkei staff writerNovember 21, 2020 23:51 JST | India
CopyCopied

TOKYO -- With India's tourism and travel sector mired in a massive slump as the country, along with most of the world, remains in a virtual lockdown because of the coronavirus, government and industry leaders have had to come up with novel ideas to spark some kind of growth.

One of the country's leading budget carriers, SpiceJet, looks to be on something. Thousands of people have signed up for the country's first-ever domestic route serviced by seaplane, raising hopes that government assistance to revive the sector will pay off.

SpiceJet began daily roundtrips between Ahmedabad and Kevadia, a city about 200 km away that is home to the world's largest statue, at the end of October. The roughly 30-minute flight aboard a 15-seat hydroplane costs a relatively reasonable 1,500 rupees ($20).

"I'd love to try it once the coronavirus is under control," said a man in his 30s who lives in Mumbai. Social media platforms like Twitter and YouTube are already abuzz with clips taken on the flight.

The seaplanes will "greatly contribute to tourism in the region," Prime Minister Narendra Modi said while observing the inaugural flight on Oct. 31. The 182-meter Statue of Unity in Kevadia is dedicated to Sardar Vallabhbhai Patel, India's first deputy prime minister and a major figure behind the country's independence. Standing twice as tall as the Statue of Liberty in New York, it drew roughly 2.6 million visitors in the 12 months following its completion in 2018. 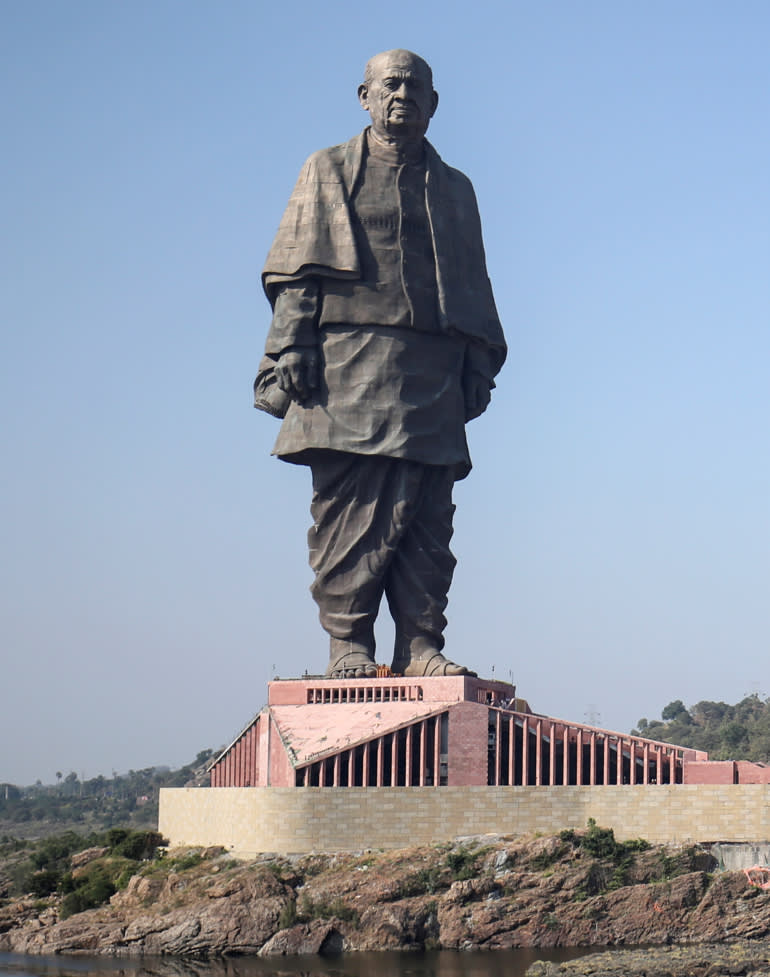 The Statue of Unity, portraying Sardar Vallabhbhai Patel, one of the founding fathers of India, in Kevadia. It is twice as tall as the Statue of Liberty.   © Reuters

Roughly 3,000 reservations for the flight were made within two days of the launch, local media report, despite many in India still avoiding travel due to the coronavirus. Because the aircraft flies at a low altitude, passengers can enjoy the scenery while up in the air. The novelty of taking off from and landing on water is a major draw as well.

The tourism and aviation industries have been hit particularly hard across the world by COVID-19, and India is no exception. The country stopped domestic flights for two months starting May 25, and has only reopened a limited number of routes.

The number of passengers on domestic flights dropped roughly 60% on the year to about 44 million in the January-September period, and India's tourism industry as a whole has lost 5 trillion rupees by some estimates.

SpiceJet Chairman Ajay Singh hopes that seaplanes will breathe new life into Indian tourism. The planes will make it easier for people to visit India's many hard-to-access scenic spots, he said.

The Ahmedabad-Kevadia route, as well as 16 others including some still in their planning stages, qualify for government assistance designed to promote cheap flights between regional cities. In addition to boosting tourism, the government hopes that hydroplanes can increase access to areas where traditional landing strips cannot be built, and plans to promote more new routes and landing areas for these aircraft.