US short-term-rental platform sets sights on $1.5tn market in Asia 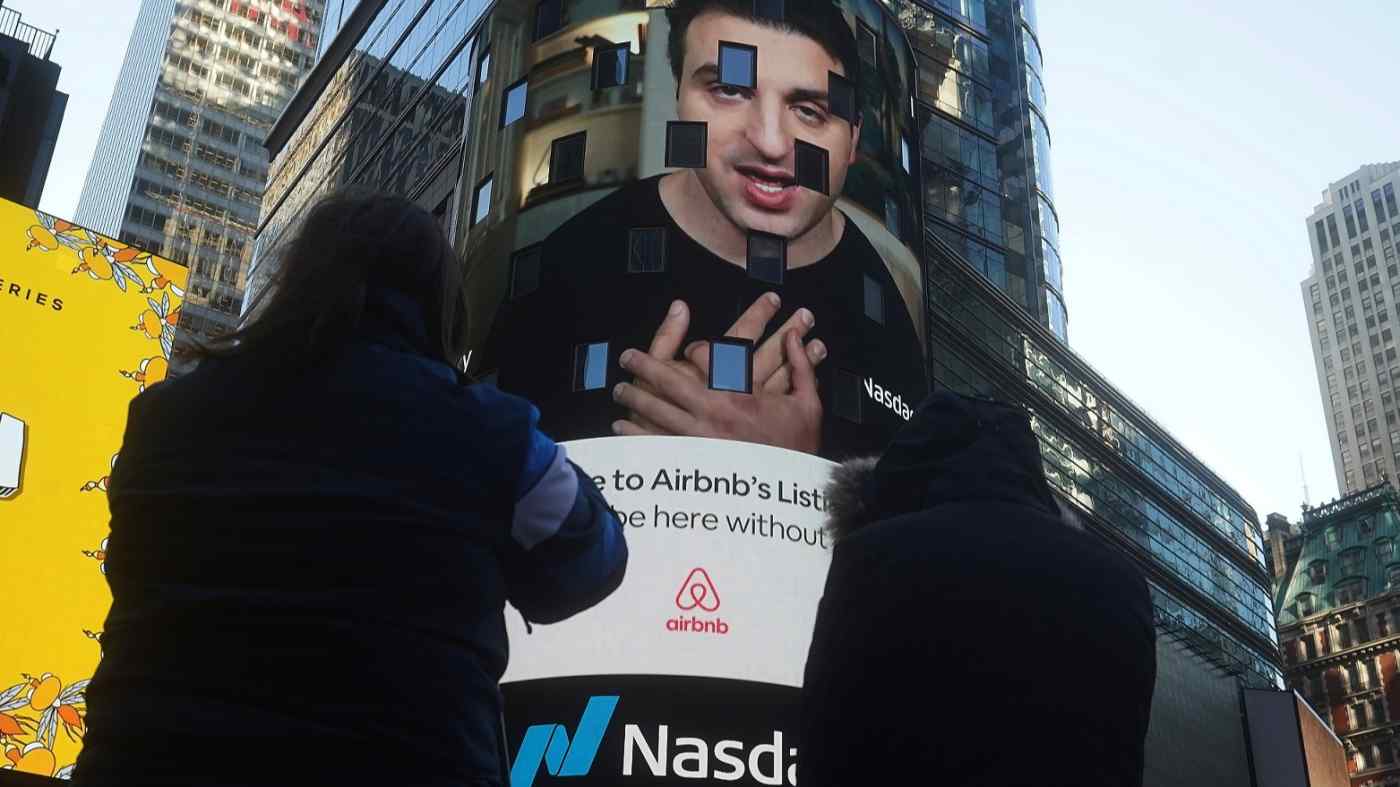 PALO ALTO, U.S. -- Shares of Airbnb soared in its blockbuster market debut Thursday on Nasdaq to close at $145 per share on its first day of trading, more than double the $68 price the company set for its initial public offering.

"In April, we raised money, and it was a debt financing. That price would have priced us around 30 bucks," a taken-aback Airbnb co-founder and CEO Brian Chesky told Bloomberg Television in the morning when indications showed a possible opening price of $139. "So I -- I don't know what else to say."

"I'm very humbled by it," he said, later adding that "the higher the stock price, the higher expectations, the harder we're going to be working, obviously."

The U.S. short-term-rental platform is boasting of its prospects for ramping up business in Asia as it met strong investor interest this week in the teeth of the global coronavirus pandemic. Airbnb debuted the day after food delivery company DoorDash listed on the New York Stock Exchange, also skyrocketing on the day of its IPO.

Airbnb's better-than-expected market debut is largely due to the company's resilience during the pandemic. San Francisco-based Airbnb was hard hit by COVID-19, along with its peers in the travel industry, but turned a profit in the quarter to Sept. 30 after heavy cost-cutting and a pivot to the domestic market.

North America has seen the strongest recovery in recent months among its markets -- with customers seeking nearby rental properties to take a break from months of working from home -- while the Asia-Pacific region and other international markets have not seen as much a rebound.

2020 has turned out very differently than Airbnb wanted in Asia, where the company hoped the Tokyo Olympics would provide a strong tailwind. Airbnb's expected boost in Japan this year did not materialize after the Tokyo Olympics were postponed due to the coronavirus pandemic. (Source photos by Reuters)

The company announced a major nine-year partnership with the International Olympic Committee to support accommodation in November last year. "We've been building for the long-term [in Japan]," a spokesperson told Nikkei Asia as the deal was announced.

However, things turned south quickly shortly after, as COVID-19 spread from China, the world entered a travel lockdown and the Olympics were postponed. Airbnb was hit with a loss of $696 million in the first nine months of 2020, compared to a $323 million loss for the same period last year.

The region also ranks low in what Airbnb calls gross booking value per night and experiences booked. Asia-Pacific has generated less than $80 per night by that measure so far in 2020 -- less than half the comparable figure for North America. Asia Pacific is also the region with the shortest average stay per booking.

However, in its IPO filing the company does not seem to waver from its ambitions in the Asia-Pacific region, which it sees as its biggest market opportunity in the long term. The region is expected to outgrow North America and Europe and generate $1.5 trillion in short- and long-term stays and experiences, a company filing shows.

"We plan to expand our global network in the countries in which we already have a deep presence, as well as to expand into markets where our penetration is lower, such as India, China, Latin America, Southeast Asia and tens of thousands of smaller markets and remote areas around the world," Airbnb's filing said.

China, in particular, has been and will be a priority market for Airbnb. The company did not break down its revenue share in the country, but said it will "continue to invest in our brand in China, Aibiying, to better serve our Chinese hosts and guests."

Currently, many choose home-sharing services because of their low prices, but their "exclusive experience can also be a big driving force," a factor with which Airbnb can potentially differentiate itself from regional rivals, he argued, adding that effective vaccines are a precondition.

However, the $1.5 trillion Asia Pacific market is not a $1.5 trillion that's easy to win. Besides the pandemic, the U.S. travel giant is up against some intense competition from the region's local rivals, especially from so-called "super-apps."

"Some competitors or potential competitors are creating 'super-apps' where consumers can use many online services without leaving that company's app, e.g., in particular regions, such as Asia, where e-commerce transactions are conducted primarily through apps on mobile devices," Airbnb pointed out in its prospectus.

If any of those super-apps decides to cut Airbnb off from access or decided to launch their own competing products, that could "materially adversely affect" Airbnb's businesses in the region.

Airbnb's concern is certainly grounded. Xiaozhu Rental, one of Airbnb's leading competitors in China, has received a $120 million investment led by Yunfeng Capital, a venture fund co-founded by Alibaba's Jack Ma. Since the investment, Xiaozhu has reached several partnerships with Alibaba-affiliated apps, including teaming up with Alipay -- a payment super-app owned by Alibaba's Ant Group -- to leverage its credit system for check-ins and checkouts.

While Alibaba has not shown any intention to cut off Xiaozhu Rental's rivals from Alipay, it would certainly cost Airbnb a significant part of its China revenue if it were no longer able to access the country's most-used payment app.

Airbnb, which declined to comment, will start trading on Nasdaq on Thursday.