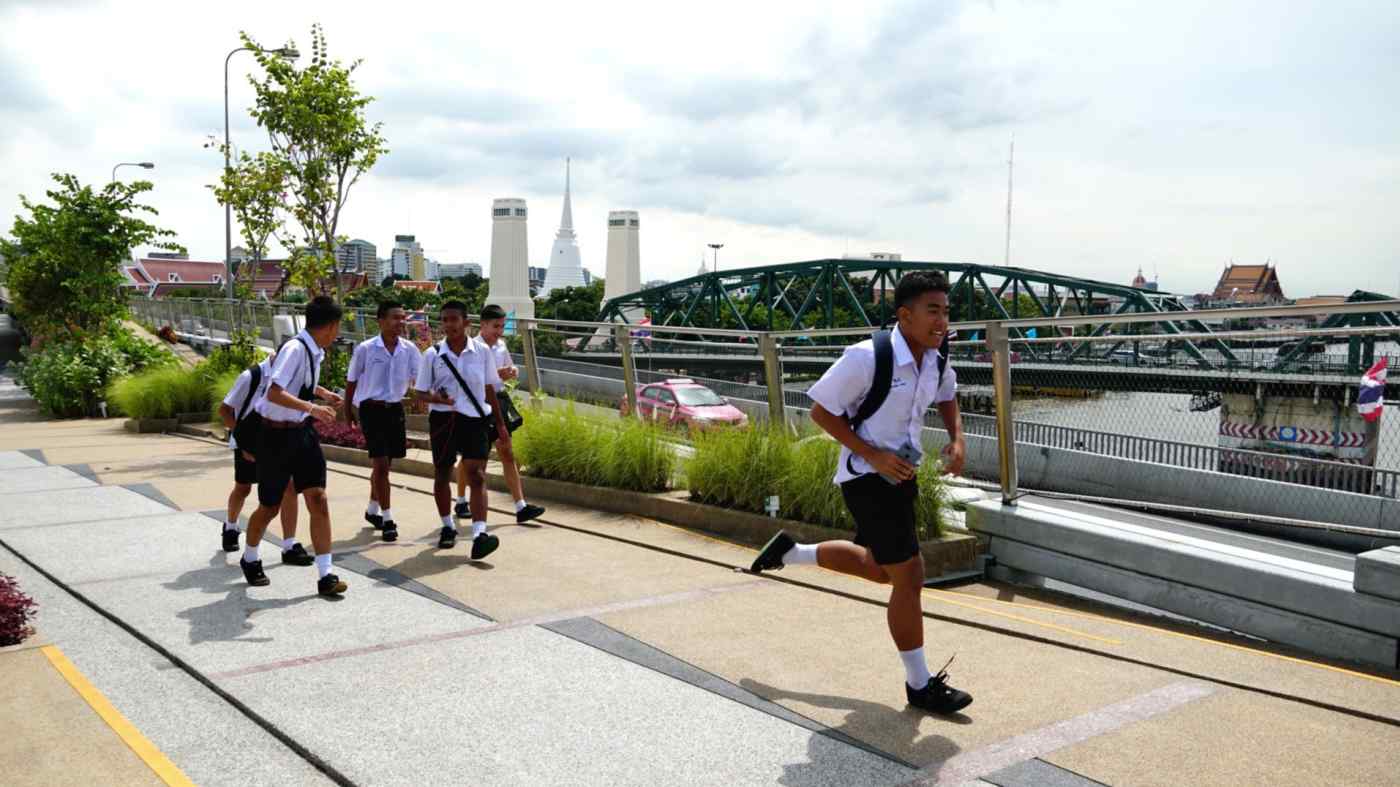 BANGKOK -- Thailand has spruced up its capital in hopes of drawing tourists back to the Southeast Asian nation, turning a 30-year-old failed railway project into a tree-lined pedestrian walkway over the city's Chao Phraya River.

Chao Phraya Sky Park, the latest tourist attraction in a city full of them, comes as the country begins to chart a post-pandemic course for reopening its borders to international tourists -- a crucial part of the country's economy. It also comes at a time when the country is experiencing growing protests over inequality.

The sky park, opened in June, offers visitors an expanded view of the magnificent Wat Arun, known as the Temple of Dawn, and the Bangkok skyline. The roughly 280-meter footbridge, complete with elevators, soon became a favorite spot for locals to watch the sunset, attracting many families and couples before dusk on weekends.

"I want to see more parks like this created in Bangkok because the city doesn't have many," a teenager said.

The bridge was part of an uncompleted mass transit project that was scrapped in 1992. Canadian engineering company Lavalin started construction after being commissioned by the Thai government, but the company withdrew due to financing issues.

The bridge had been left unfinished for nearly three decades.

The Bangkok Metropolitan Administration spent 130 million baht ($4.1 million) on the makeover, raising hopes that it will become a tourist attraction.

The footbridge "lets people relax and enjoy taking walks, and this helps enhance their city life," said Niramon Kulsrisombat, the director of the Urban Design and Development Center at Chulalongkorn University who was involved in the sky bridge project. The use of the existing structure helped lower costs, she said.

The government is also eyeing a makeover of the 88-year-old Memorial Bridge that runs nearly parallel to the sky park, seeking to restart its halted bascule function by 2023. This would give people in the sky park a clear view as the bridge opens and closes. The head of the regional road bureau at the Ministry of Transport said it will "add charm as a tourism spot."

The private sector is also reviving historical structures. BTS, the operator of the city's elevated train system, plans to renovate a 130-year-old tax agency building to open a complex comprised of restaurants and a convention hall in 2025. The European-style building has served as a location for Hong Kong films but has been idle for years.

Thailand is a tourism powerhouse, drawing 40 million visitors last year. The travel industry is said to generate 20% of the country's gross domestic product. As the coronavirus pandemic has all but halted international travel, the country is racing to create new tourist spots as it prepares to reopen its economy.