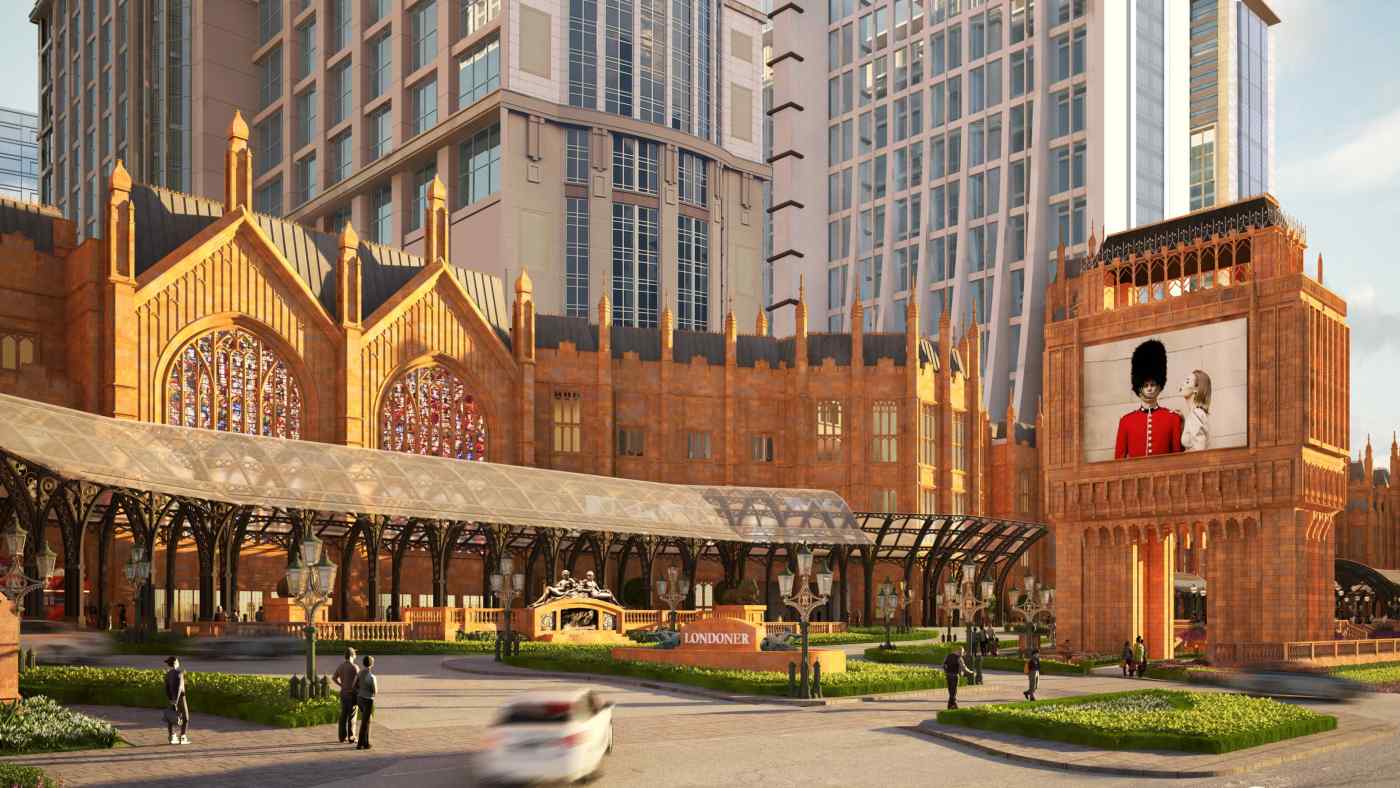 The facade of what was the Cotai Central resort is being remade to resemble the Palace of Westminster. (Illustration courtesy Sands China)
ZACH COLEMAN, Nikkei Asia deputy editorJanuary 22, 2021 13:15 JST | Macao
CopyCopied

HONG KONG -- With the real London largely out of reach to tourists amid the U.K.'s coronavirus lockdown and travel curbs due to the country's virulent COVID-19 mutation, Asia is set to get its own version of the British capital on Friday.

The $2 billion Londoner Macao casino resort, due to include everything from David Beckham hotel suites to Scots Guards, a full-size replica of Big Ben and a Gordon Ramsay restaurant, will open its doors to guests.

But it may not be much livelier than its inspiration for a while.

Macao, which has not reported even an imported case of COVID-19 since July, remains closed to visitors except from mainland China. Chinese tourist traffic is flowing again but is lagging far behind pre-pandemic levels due to new coronavirus-related procedural hurdles. The upcoming Lunar New Year is expected to be quiet amid a resurgence of infections in the mainland.

Still, the medium- to long-term omens for The Londoner are positive, analysts say.

Local sales of luxury goods soared 48% in 2020, according to an estimate by consultancy Bain & Co. and a unit of Alibaba Group Holding, while domestic air traffic has rebounded to near pre-COVID levels. China's resurgent economic growth and the rise of the yuan against the dollar are also supporting perceptions of high potential demand for Macao travel.

"Our investment in The Londoner Macao is a clear signal that we believe Macao's future as one of the world's most important leisure and business destinations remains on course," said Robert Goldstein, acting chairman and chief executive of Las Vegas Sands, the resort's owner, in a statement last month.

Its opening comes on the heels of Sands' quiet launch in October of The Grand Suites at Four Seasons, a 290-suite hotel tower resulting from a $450 million makeover of a long-idled condo project. The company, which also operates The Venetian Macao and The Parisian Macao, is due to report initial results for the new property in its quarterly update on Jan. 27.

The Londoner is also the result of a makeover.

The resort, which was originally to include a Shangri-La Hotel, opened with a Himalayan theme and one of its casinos still carries the Himalaya name. When the complex opened without Shangri-La, it took on the generic identity Cotai Central, named for its district in Macao.

As part of its new theme, the resort's facade is being remade to look like the Palace of Westminster. The Londoner Hotel, the first phase of the remodeled resort, was created by combining rooms from what was a 1,200-room Holiday Inn to make 600 suites. The resort will also include 370 suites in The Londoner Court as well as a new arena and theater.

Analysts foresee little disruption amid the management transition, noting Goldstein has been with the company since 1995 and that Adelson's family retains firm ownership control.

"Mr. Adelson's health had been deteriorating for some time and a transition was well-anticipated and planned," wrote Bernstein analyst Vitaly Umansky in a note to clients. "Sands has strong management teams and the internal succession plan is in place."

He and other analysts expect Sands and four of Macao's other five gaming operators to report gross profits before interest, taxes, depreciation and amortization for the October-December quarter. The Residence, the Londoner Hotel’s club section, is made up of rooms “inspired by classic London houses and the homes of British celebrities and famous figures.” (Courtesy Sands China).

Although the city's gross gambling revenues declined 71.1% to 20.87 billion patacas ($2.61 billion) for the period from a year before, that was a big improvement from the operators' combined 8.12 billion pataca take for the previous two quarters. With the flow of red ink stanched by the return of Chinese visitors, all six operators have announced that they will pay special bonuses to staff.

Expectations for further financial improvement this quarter and likely the next are limited. But the outlook beyond that looks more promising.

"We see a strong step-function improvement beginning in (the second half of 2021) as COVID-related constraints, in particular travel-related impediments, begin to fall away," said Umansky in another report.

Sands' rivals SJM Holdings and Galaxy Entertainment Group are positioning themselves to ride the rebound with their own property openings later in the year. The capacity surge should help drive revenue growth for the market, according to Morgan Stanley analyst Praveen Choudhary.

Some external trends should also benefit Macao casinos. With COVID-related travel restrictions hampering Chinese travel to other countries and both outbreaks and new measures by Beijing to discourage them from checking out casinos elsewhere, Macao will stand out as the easy option for Chinese with cash to spend.

He expects gross gambling revenues to triple this year from 60.4 billion patacas to 188.95 billion patacas, which would still be a third below the city's 2019 level. Next year, revenues would nearly close the gap by hitting 275.87 billion patacas.