Spending up 5%, but large crowds ring alarm over another coronavirus wave 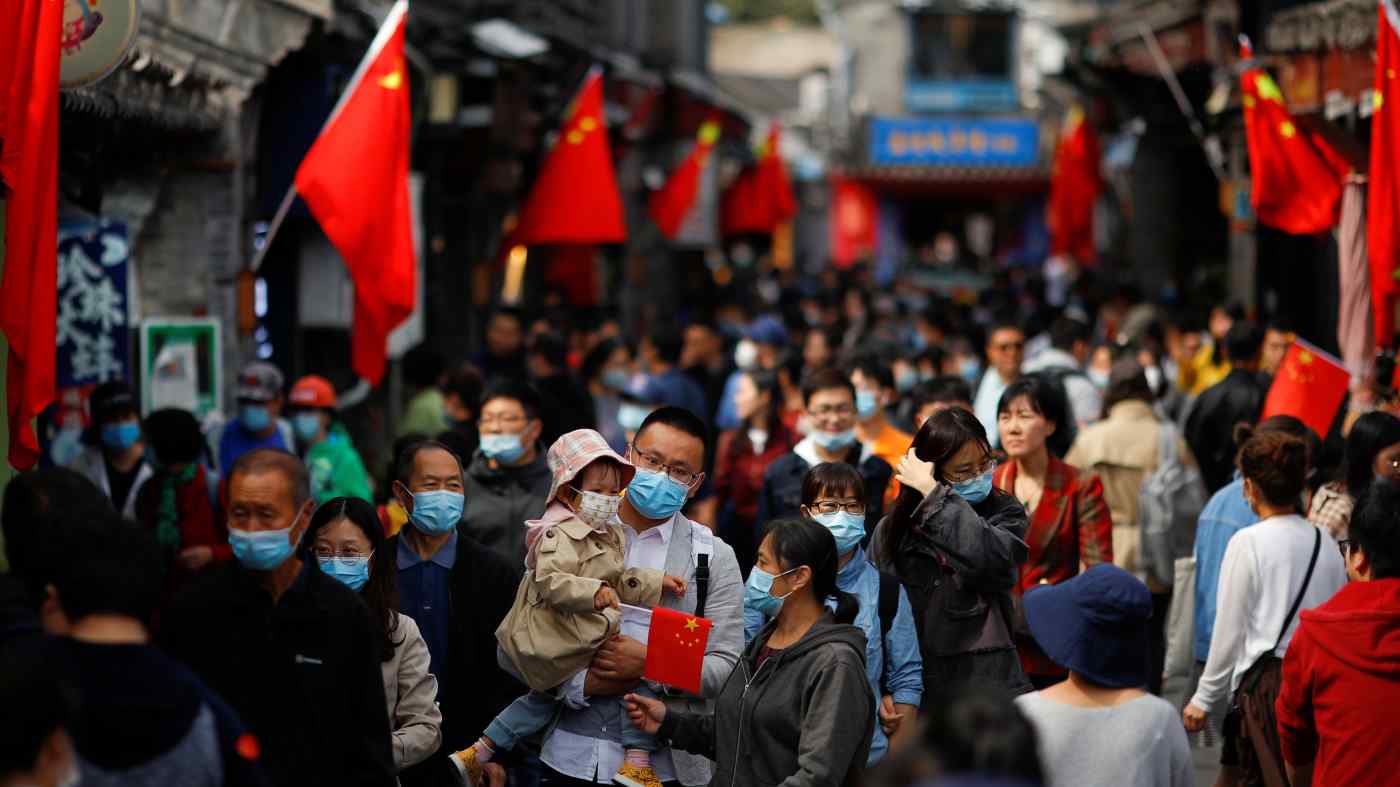 SHANGHAI -- Massive crowds flooded the historic Bund waterfront district here in the middle of China's Golden Week holidays, with people lining up to catch a glimpse of the city's iconic skyline lit up at night.

Also known as Waitan, the area was so busy that police officers were sent in to direct foot traffic, in a scene once unthinkable in a country that was the first epicenter of the coronavirus pandemic still gripping much of the world.

Nearly 10 months after the outbreak, Chinese people celebrated the extra-long eight-day national holiday ended Thursday by shopping, dining and going to tourist spots. Their spending delivered a much-needed boost to the coronavirus-battered tourism industry and economy as a whole.

"China has curbed the coronavirus outbreak, so there's no problem," said a woman who made the trip from the Sichuan Province capital of Chengdu to Shanghai.

Average daily sales at major retailers and restaurant operators during the holidays were 4.9% higher than the year earlier, according to government data released Thursday, the last day of the celebration.

While many people were optimistic during the holiday, some still had concerns, especially about the size of the crowds. One woman said she was "worried because there are lots of people not wearing masks."

This annual celebration starting on Oct. 1, China's National Day, was a day longer this year because the coincided with the Mid-Autumn Festival, an important cultural event. Sales during the period reached 1.6 trillion yuan ($239 billion), according to the Ministry of Commerce.

Chinese often go on overseas vacations during Golden Week. But with the pandemic making international travel all but impossible, travelers chose domestic destinations.

Roughly 618 million trips were made within China from Oct. 1 to Wednesday, 21% below the year-earlier level, according to the Ministry of Culture and Tourism.

The amount of trips was a softer decline than the 41% drop for the Labor Day holiday in May. Rail, air and highway travelers were down 28% on the first day of Golden Week, local media report, suggesting that fewer people are avoiding longer-distance trips.

The rise in the movement of people is fueling concerns about the second or third wave of coronavirus infections.

"We wanted to avoid crowds, so we stayed home this year," said a 39-year-old Shanghai resident who usually takes his family on a trip during the holiday. While authorities had told major tourist attractions, movie theaters and entertainment facilities to cap admission to 75% of capacity, many places apparently were packed with people.

Entrance was controlled in certain popular sections of Waitan in Shanghai, which meant surrounding streets were full of people who were unable to get to their destinations. More than 80,000 people descended on Waitan on the evening of Oct. 2, up about 9,000 from the year earlier, Chinese media reported.

Meanwhile, the National Palace Museum in Beijing required reservations, keeping visitors to 30,000 a day, or less than 40% of the typical attendance.