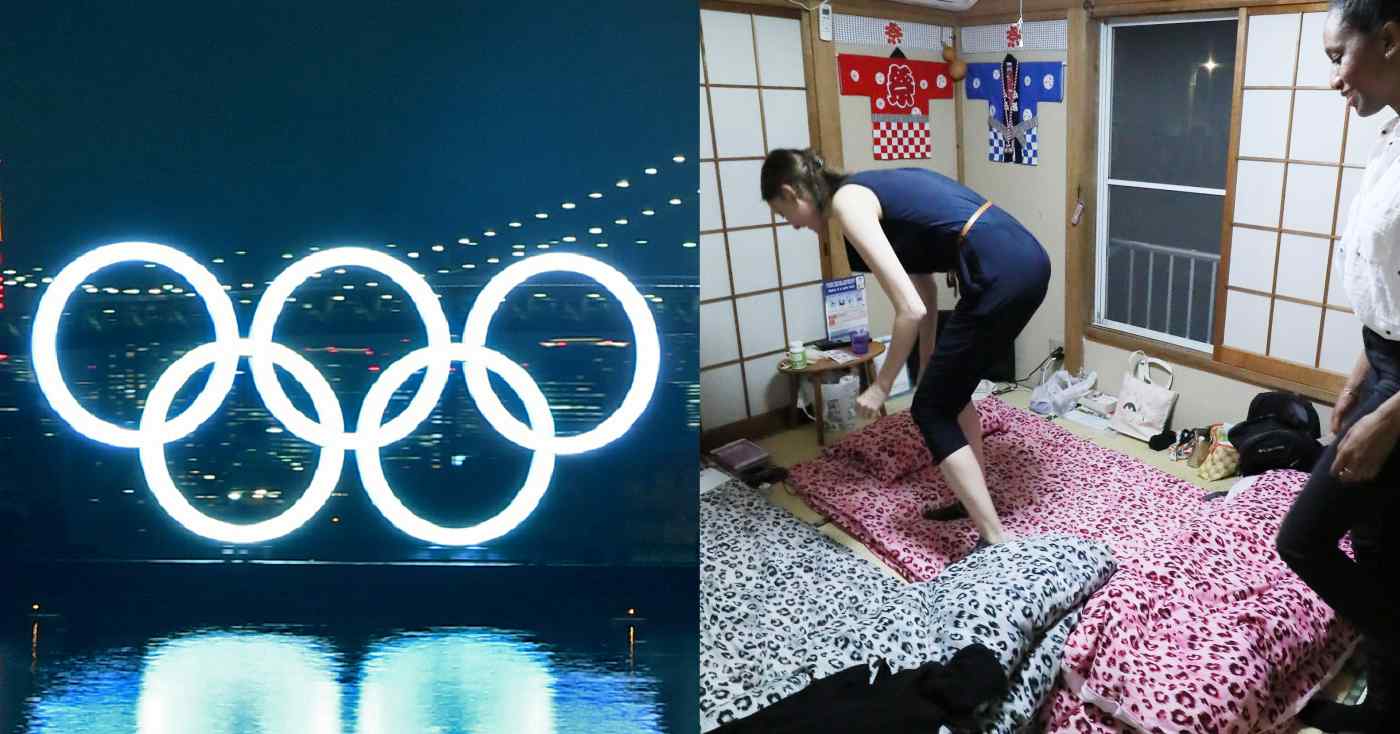 Japanese who rent out spare rooms or apartments are having trouble making ends meet and might not be able to stick it out until the Tokyo Olympics and an expected bonanza that is now in doubt. (Source photos by Nikkei)
JADA NAGUMO, Nikkei staff writerMarch 15, 2020 20:02 JST | Japan
CopyCopied

TOKYO/FUKUOKA -- Akiko Yamamoto, a 32-year-old office worker from Kyushu, Japan's southernmost main island, has a side business: She rents out an apartment in Tenjin, Fukuoka, Kyushu's largest downtown area, to tourists.

The practice that Airbnb began popularizing about a decade ago has a longer history in Japan. There's even a Japanese word for it, minpaku.

Tenjin is closer to South Korea than it is to Tokyo, making it an easy journey for South Koreans hungry for Fukuoka's famous ramen. It also draws a lot of Chinese and Western tourists.

But Yamamoto senses trouble. "I'm afraid tourists will stop coming," she said. "Then I'll have no way of making money with my apartment."

Her fear is not unfounded, and the slowdown that is already affecting Yamamoto and other side business owners like herself portends pain for Japan's economy as a whole.

Her business has also been hurt by the new coronavirus, which has led to a slew of cancelations from foreign visitors and has thrown the Tokyo Olympics into uncertainty. Fukuoka, famous for its street food, draws many tourists from South Korea, China and the Western world. (Photo by Koji Zenke)

Yamamoto said she began her minpaku business almost two years ago when a set of regulations took effect, eliminating the legal gray area to which the industry had long been relegated. The law allows homeowners or renters to sublet rooms or entire homes for a maximum 180 days a year, if they meet a number of requirements.

Many homeowners taking advantage of the law have set up limited liability companies.

The legislation was billed as part of the Japanese government's efforts to accommodate surging tourist numbers and an expected crush of visitors for the Tokyo Olympics, a little more than four months away.

Minpaku has since emerged from the shadows as a legitimate growth industry, one that has been able to count on seemingly endless rivers of cost-conscious foreign travelers seeking cheap or alternative accommodations.

Last year, market researcher Fuji Keizai Networks estimated that the minpaku industry, including side services like consulting for landlords, would take in close to 130 billion yen ($1.2 billion) this year.

But that was before the new coronavirus began to spread and tourist numbers started to slide.

What was supposed to be a banner year for tourism is now under threat. On Feb. 1, Japan banned travelers from China's Hubei Province, whose capital, Wuhan, is the epicenter of the pandemic. It has since restricted other travelers, while fears of the virus have persuaded many other tourists to cancel their plans.

China is Japan's main source of tourists, and Chinese have been the biggest users of minpaku. According to the Japan Tourism Agency's most recent data, 28% of overall foreign minpaku users are Chinese. South Koreans are a distant second at 6%. A check-in counter for flights to China are seen closed at Tokyo's Haneda International Airport. (Photo by Kei Higuchi)

Now the industry, just as it was learning to cope with the new regulations, is staring at the possibility that demand will evaporate.

Japan Tourism Agency data shows a steady increase in minpaku closures. During the five weeks up to Feb. 12, there was a 15% increase in business closures compared to the previous four weeks. Since November, 3,267 minpaku businesses have gone under.

Escalating economic fears have pushed people like Yamamoto who own or operate approved lodgings to re-strategize, or even to sell their operating rights altogether.

Jimoty, an online classifieds site that includes help-wanted and secondhand listings, gives a more detailed glimpse into what is happening.

A user by the name of Korosuke has a pitch: Start your own business for 100,000 yen ($905). That's how much he is willing to let go of the operating rights to a four-story house in Osaka's Kyobashi district. The listing, made Feb. 14, notes that the opportunity is available because of the coronavirus turmoil.

Korosuke's real name is Kousuke Kikuchi. The 34-year-old explains on the site that "until now there have been profits, but because I am operating it on my own I am faced with the risk of profit falling below rent."

"I have decided to pull out of the operation begrudgingly," Kikuchi said.

Begrudgingly because he spent more than 2 million yen on furniture and for the minpaku permit.

Kikuchi still operates about six other minpaku properties around Osaka that have lower rents. However, he said, "business has been tough ever since the relationship between Japan and South Korea began to go south last year."

That country's Supreme Court in November 2018 ordered Japanese companies to compensate South Koreans forced to work during World War II. Although the South Korean government has not enforced the ruling, Japan retaliated last summer with export restrictions that are making it difficult for companies like Samsung Electronics to obtain crucial materials.

Reo Kurosawa, CEO of G-Tech, a consultancy that specializes in administrative issues, said cities like Fukuoka and Osaka "are suffering bad" due to the spread of the coronavirus and the decline in South Korean tourists.

"It wouldn't be surprising if some places experience a sales drop of more than 50%," Kurosawa said.

"I am worried that business won't pick up even after this summer," he said. "I know a lot of people in the business are counting on the Olympics to bring back demand. I really hope the market livens up again, or Japan's economic growth will be at risk."

The pandemic's impact has thrown the Tokyo Olympics into uncertainty, though the International Olympic Committee insists the games will go ahead as planned.

On Thursday, IOC chief Thomas Bach told Germany's ARD television network that the IOC would follow the World Health Organization's recommendation on whether to cancel or postpone the games. The main stadium for the Tokyo Olympics waits for the July opening ceremony. (Photo by Takaki Kawshiwabara)

Ryutaro Kono, chief economist at BNP Paribas Securities Japan, noted in a report that if the Olympics are canceled, Japan's real economy will suffer huge damage. Furthermore, he said, "it could lead to issues of debt within the country's inbound related market, which was considered a growth area and has experienced massive inflows of economic resources."

In January, 2.66 million people visited Japan from abroad, down 1.1% from a year earlier, according to Japanese government data. Chinese travelers increased about 20%, though the figure was helped by a favorable comparison with 2019, when Chinese New Year took place in February. This year the holiday period began on Jan. 25, before China put 40 million people on lockdown.

The number of Chinese tourists in February is expected to have declined sharply.

There is anecdotal evidence to that effect. Last month, Fujimiso, a long-established inn in Aichi prefecture, filed for bankruptcy, while Luminous Cruise, Japan's largest operator of restaurant cruise ships, based in Kobe, filed for protection from creditors. Luminous Cruise cited coronavirus-related cancellations.

Minpaku lodgings are in an especially precarious position.

Tokyo-based startup Space Agent operates an online site for minpaku hosts looking for subleaseable or minpaku-approved properties. "Compared to December," CEO Ryota Kaminaka said, "our matching rate has gone down about 30%" as hosts begin to retreat from the market.

He added that "Chinese investors have also been backing out of real estate deals. They no longer want to come to Japan or buy property."

"I think many people have now felt the actual risks of operating minpaku," said Takuya Ichikawa, senior researcher at Daiwa Institute of Research. "Those who have retreated from the market will likely not return, even after the coronavirus subsides."

As for Airbnb, the world's largest vacation rental platform with more than 7 million properties around the world, a spokesperson declined to say how the outbreak is affecting the company's business.

"We are concerned about the coronavirus," he said, "but cannot disclose detailed information" due to restrictions as Airbnb prepares for its initial public offering in the U.S., planned for later this year.

One person familiar with the industry said, "Airbnb will be hard-hit by the epidemic." The source noted that Asia has provided the platform with such immense growth that it "has become one of Airbnb's biggest strengths."

But strength is relative. According to The Wall Street Journal, Airbnb logged a $322 million net loss for the nine months through September.

"If it's already losing money," the source said, "it is sure to suffer more losses due to the coronavirus."

G-Tech's Kurosawa predicts that big players, including real estate agencies, will likely stay in the minpaku game. "Big companies will be able to withstand the headwinds for a while," he said, "as they tend to have a diversified business portfolio."

Once the virus subsides, it will be up to the survivors to revitalize the industry.

Takaaki Someya, founding partner of the Ikeda and Someya law firm, suggested Japanese guests will be crucial. "Instead of totally depending on foreign tourists," Someya said, "minpaku should try to attract domestic travelers."

Space Agent's Kaminaka agrees. "The domestic travel market is still big and significant," he said. "Currently about 70% of minpaku users are foreigners."

Once the coronavirus outbreak quiets down, he added, "we have to get more Japanese people to use minpaku."