SIEM REAP -- Before the COVID-19 pandemic, tuk-tuk driver Long Kim Chhin ferried foreign tourists "every other day" to Cambodia's Angkorian temples, marveling each time at the grand stone structures erected by his forebears.

"I miss coming here," the 42-year-old told the Nikkei Asian Review as his motorbike-drawn carriage neared the Angkor Wat temple in May. "Before today, I haven't had a passenger in three months."

Siem Reap is the gateway to the Angkor temple complex, Cambodia's biggest tourism draw. Since the coronavirus outbreak, however, the city has been transformed from a bustling holiday hub into a virtual ghost town.

The Angkor Archaeological Park saw a 99.5% drop in revenue in April -- from $7 million in 2019 to just $29,368 in 2020. Hundreds of hotels, restaurants and shops in Siem Reap have shut their doors, and those that remain open are struggling.

Cambodia is not alone in its tourism troubles: From Thailand to Indonesia to Japan, countries are struggling with unprecedented plunges in visitor numbers. The problem for Cambodia is that its tourism industry -- which makes up a fifth of the economy -- was already on shaky ground thanks to an overreliance on China and lack of investment in infrastructure.

International arrivals in Cambodia dropped 64% in March, according to government data. The country recorded almost $5 billion in international tourism receipts last year, equivalent to about 20% of its GDP, while reports place the sector's workforce between 600,000 and 800,000. Indirectly, it supports the livelihoods of millions.

In Siem Reap, business owners say they are not sure how long they can hang on. 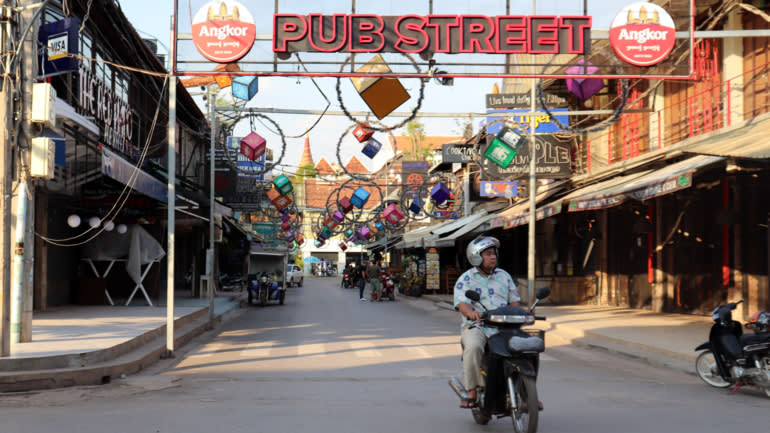 Pub Street in Siem Reap, normally a favorite haunt of backpackers, has been all but deserted since the coronavirus pandemic broke out. (Photo by Bopha Phorn)

"It's been two months and 13 days. ... No customers have been walking this street," said Mohamad Ezeddin, owner of Cafe Latino, a restaurant on the city's normally bustling Pub Street thoroughfare. "I lose $5,000 to $6,000 each month, but I keep it open for the staff."

Steven Phich owns eOCambo, which operates two hotels in Siem Reap, one with 49 rooms and the other with 32. Phich said that many hoteliers, including himself, lease their properties and face losing their businesses completely if the downturn continues.

"If I alone am responsible for more than 1,000 people directly and indirectly, if there are hundreds of people like me, with businesses bigger than mine, how many [could be] unemployed in the city?" he said. "At least 100,000."

The government has offered tax breaks for businesses and a small wage subsidy for workers, but whether the industry will rebound quickly enough to save many tourism-dependent businesses remains uncertain. The Asian Development Bank calculated Cambodia's tourism sector could lose between $345 million and $856 million over the coming months.

Worldwide, international tourist arrivals are set to fall between 60-80% in 2020, according to the United Nations World Tourism Organization, translating to a loss of $910 billion to $1.2 trillion in global export revenues.

Almost half of a group of experts surveyed by the UNWTO said they expect domestic tourism in general to begin to recover by September. For international tourism demand, 34% expected to see some recovery by the final months of 2020, while some 39% said the recovery would start next year.

Chinese visitors made up 35% of international arrivals last year and have been the driving force behind a boom in overseas visitors, from 4.5 million in 2014 to 6.6 million last year.

However, excluding Chinese tourists, international arrivals decelerated sharply starting in 2014 and contracted in 2018, according to the World Bank.

Cambodia's Minister for Tourism Thong Khon recently expressed his hope that Chinese visitors would lead the charge to revive tourism in the country once the pandemic subsides -- but the sector may not be as poised to benefit as the numbers would suggest.

Only about half of the 2.3 million Chinese visitors last year listed "holiday" as their purpose of visit. The growth in arrivals has come largely from workers coming to the coastal city of Sihanoukville. Online gambling fueled rapid construction in the city, until August, when the government in effect banned web-based gambling operations, bursting the casino bubble. Restaurants and hotels in Cambodia have been hit hard as travel restrictions keep international visitors away. (Photo by Bopha Phorn)

The effect was immediately visible. Growth in international arrivals dropped in the final three months of the year, after the ban was announced but before the emergence of COVID-19.

Siem Reap Airport, meanwhile, saw international arrivals decline 14% last year -- the first such drop since the financial crisis of 2008 -- while ticket sales at the Angkor Archaeological Park dropped by about the same amount. Chinese visitors to the temples, moreover, fell by about 40% in the second half of last year, a sign even before the outbreak of how precarious the tourism industry's was.

In an economic assessment last November, the World Bank noted such "worrying trends" in Cambodia's tourism sector, pointing out that the average length-of-stay had only grown from 5.4 days in 2013 to 6.4 days in 2018, while value captured per tourist had declined from $809 to $552 in the same period.

The repeat visit rate for foreign tourists also remains low at about 20%, compared to Thailand, which is 70%.

The bank called for "immediate action" to increase funding in order to improve infrastructure and coordination among tourism stakeholders and improve marketing campaigns.

The Ministry of Tourism did not respond to Nikkei's request to comment.

Chhay Sivlin, president of the Cambodia Association of Travel Agents, said the group is working on products to broaden the country's appeal, noting that the focus on attracting Chinese visitors had come at the expense of luring tourists from other countries.

Though Cambodia had been "too reliant" on the Chinese market, shifting away from such a big market was tough, she added. Whereas direct flights were available from several Chinese provinces, there were no direct flights to countries in Europe and the West.

For now, Sivlin is urging the government to extend its support measures for tourism businesses beyond the three months already promised, and to further help hotel owners who are unable to secure adequate discounts from landlords.

"This COVID-19 pandemic is not going to be over anytime soon," she said.