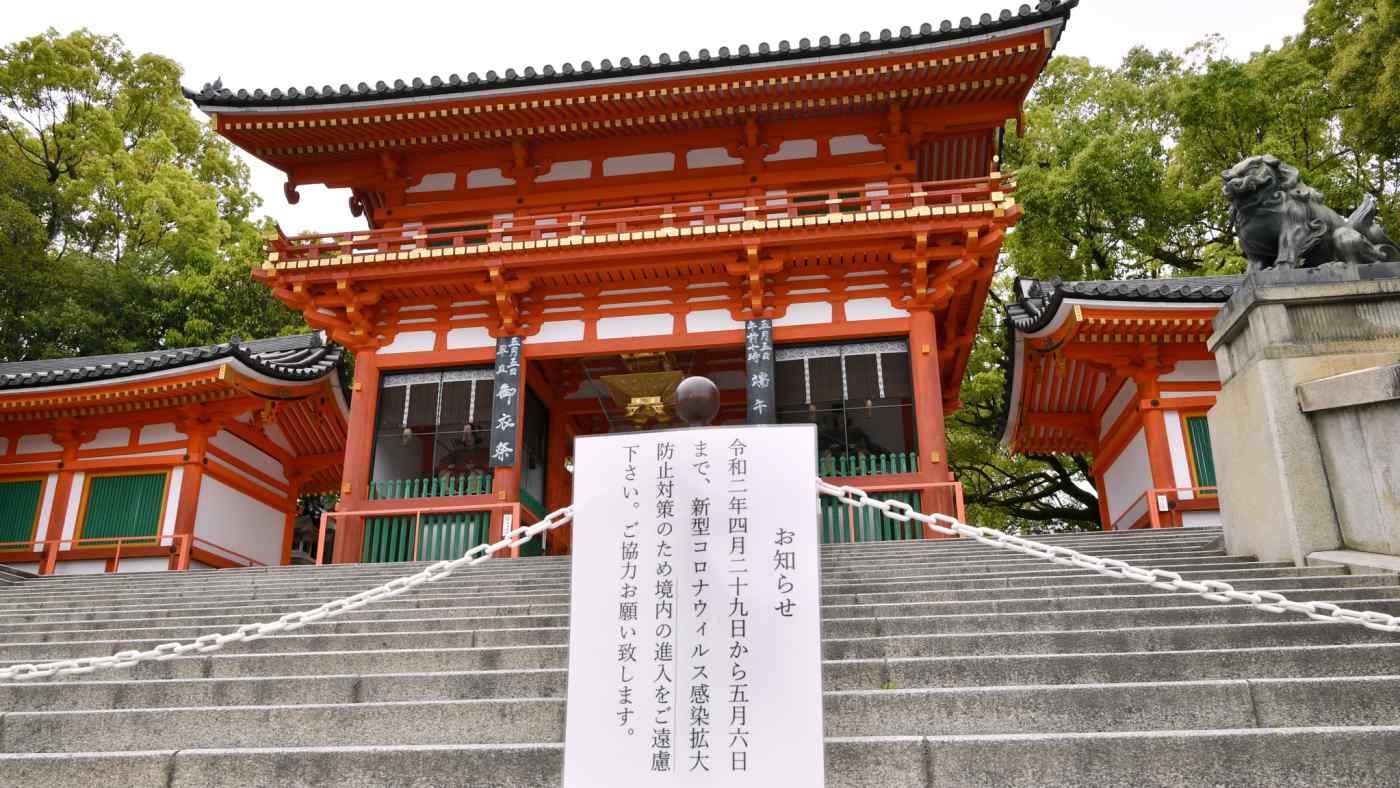 A sign at a Shinto shrine in Kyoto asks visitors not to enter the grounds due to the coronavirus pandemic. (Photo by Toshiki Sasazu)
SHUNJI ONUKI, NQN staff writerJune 18, 2020 07:07 JST | Japan
CopyCopied

TOKYO -- Kyoto and other cities in Japan should focus on attracting visitors from within the country, analysts say, as the novel coronavirus pandemic has almost completely wiped out foreign visitors.

Kyoto's tourism plan calls for 3 million overseas visitors spending the night each year. Actual numbers had easily exceeded the target, hitting 4.5 million visitors in 2018, with the sector as a whole bringing in more than 1 trillion yen ($9.3 billion) in revenue to the city. But the situation has taken a dramatic turn this year.

"Under current conditions, 3 million people is out of the question," said an official at the Kyoto city government, referring to the annual target for visitors.

Tourism across the country has suffered amid the cross-border travel restrictions. Foreign visitors to Japan in May plunged 99.9% on the year to 1,700, down from 2,900 in April and marking a record low for the second straight month, according to an estimate released Wednesday by the Japan National Tourism Organization. Just 30 visitors came from China and 20 from South Korea, down from about 920,000 and 310,000 in January.

About 3.94 million visitors arrived from overseas over the first five months of the year, less than 30% the year-earlier level.

This decline has affected travel-related service industries, including hotels. Lodgings across Japan had an occupancy rate of 16.6% in April, down from 64.7% a year earlier, according to the Japan Tourism Agency. Of 250 coronavirus-related bankruptcies in Japan as of Tuesday, 35 were in the hospitality industry, the second-highest number after restaurants at 37, according to Tokyo Shoko Research.

The government has started to move toward easing inbound travel restrictions. Foreign Minister Toshimitsu Motegi told a parliamentary committee on Monday that Japan will hold talks with Vietnam, New Zealand and Australia on resuming travel by essential personnel. But regarding China, which accounts for more than a quarter of foreign visitors, he indicated on June 10 that there are no plans to relax restrictions.

"Ending inbound restrictions will happen first for business and research," said Atsushi Takeda, chief economist at the Itochu Research Institute. "Tourists will likely start to come to Japan around the year-end."

One of Japan's most popular destinations after Tokyo, Kyoto, the ancient capital, is popular among foreigners for its streets steeped in history as well as its temples and shrines.

"Localities should think about measures targeting domestic tourists by anticipating when people will be able to freely move between prefectures," added Takeda. "There are more than a few tourist spots that are popular with foreigners but are unknown among Japanese."

Last year's data from the tourism agency shows that roughly 80% of guests staying the night were Japanese. The key to a turnaround for the tourist industry may be for Japanese people to realize Japan's appeal.