From cars to whisky, industrial tourism takes off in Japan 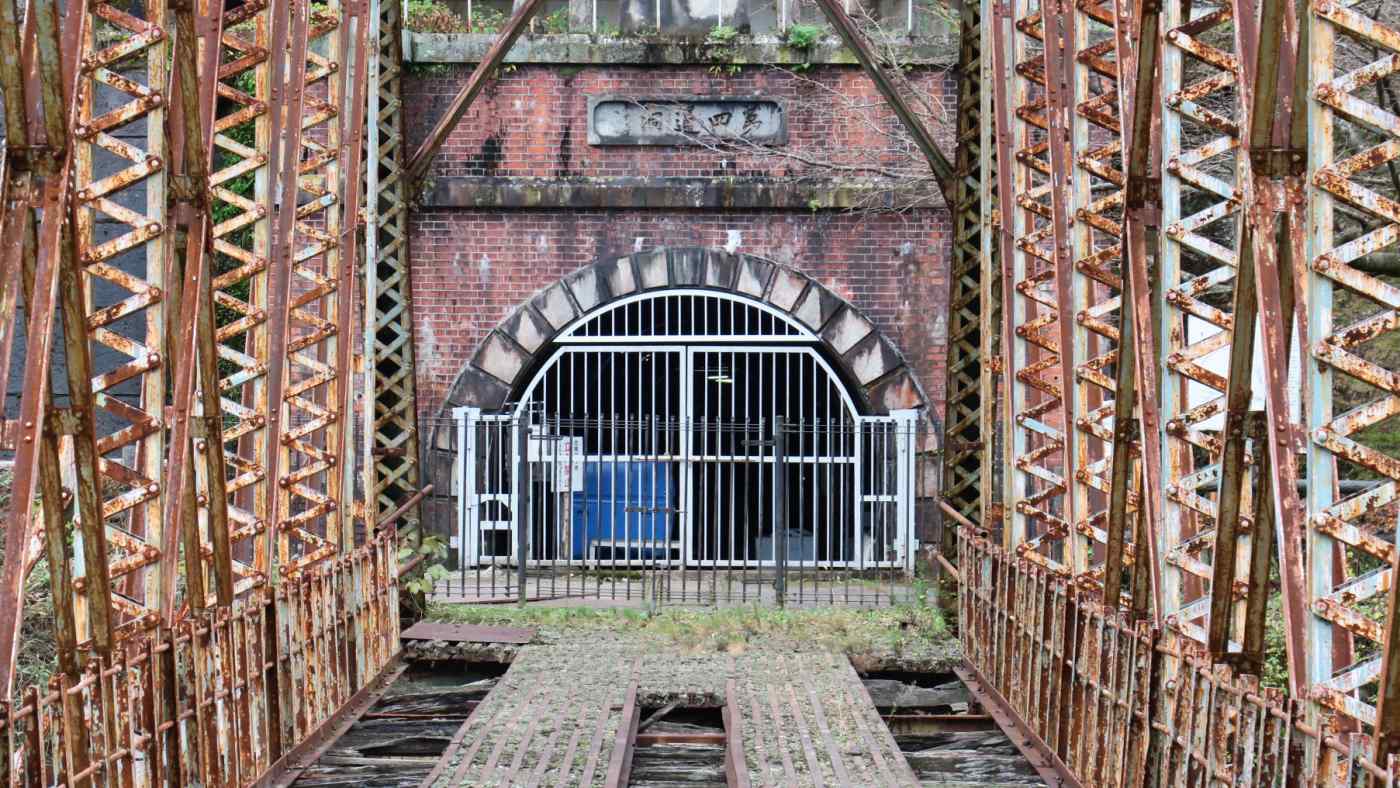 The Besshi Copper Mine’s No. 4 Adit was the mine's main transport artery. It was about 10 km long and trolleys ran along the tunnel and the connecting Yontsukyo Bridge. (Photo by Masamichi Hoshi)
Nikkei staff writersJanuary 17, 2020 15:21 JST | Japan
CopyCopied

TOKYO -- Overseas tourists in Japan are venturing further afield these days in search of unique experiences.

Many now visit industrial museums and historical sites, such as old mines and oil fields, to learn the secrets of Japan's economic success.

People in Japan's travel business hope the growing interest in industrial tourism will ease an expected drop in sightseeing after the Tokyo Summer Olympics.

"Industrial tourism will be a big hit with overseas tourists," said Katsumi Higaki, executive officer at travel agency JTB. "The number of repeat visitors is growing and many of them are showing interest not just in tours to explore the Tokyo-Kyoto 'Golden Route' but also in opportunities to learn something about Japanese industry," Higaki said.

For people who want a deeper look at Japan's history of craftsmanship and industrial prowess, here are nine good places to visit. 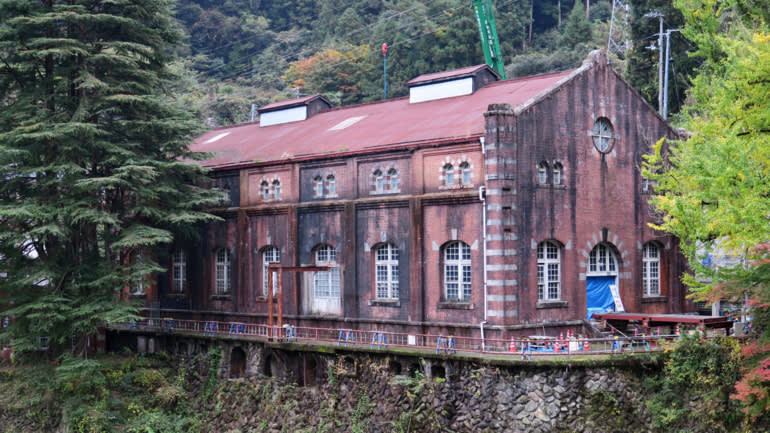 Niihama, in western Japan's Ehime Prefecture, is known as a "Sumitomo castle town." Many factories owned by the industrial group can be seen in this city facing the Seto Inland Sea. One prominent site is Sumitomo's Besshi Copper Mine.

One can still see remnants of the mine's glory days, including the No. 4 Adit, which served as the mine's main transport artery until its closure in 1973. The tunnel ran for about 10 km and connected to the Yontsukyo Bridge. Nicknamed "Machu Picchu of the East" for its brick and stone structures located atop a mountain, the mine opened in May 1691 and was one of Japan's largest sources of copper. 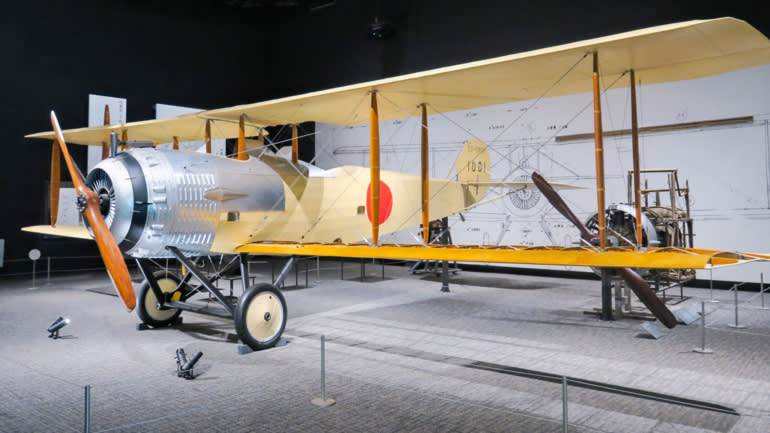 The Army Otsu-1 reconnaissance plane, the first aircraft produced in Kakamigahara, is displayed at the Gifu-Kakamigahara Air and Space Museum. (Photo by Masamichi Hoshi)

The Air Self-Defense Force's Gifu Air Base in central Japan is the oldest airfield in the country still in operation. Kakamigahara Airfield, the base's original airfield, opened in 1917.

At the adjacent Gifu-Kakamigahara Air and Space Museum, vintage aircraft are on display, including the Army Otsu-1 reconnaissance plane, which was among the first aircraft built in Kakamigahara, and the Army Type 3 fighter plane Hien, which flew in the Pacific War.

Companies such as Kawasaki Dockyard (now Kawasaki Heavy Industries) and Mitsubishi Goshi Kaisha, a forerunner of the Mitsubishi group, which saw aircraft as the next great field of endeavor, began developing planes around that time. They established plants in the Nagoya area to test their machines at Kakamigahara Airfield. 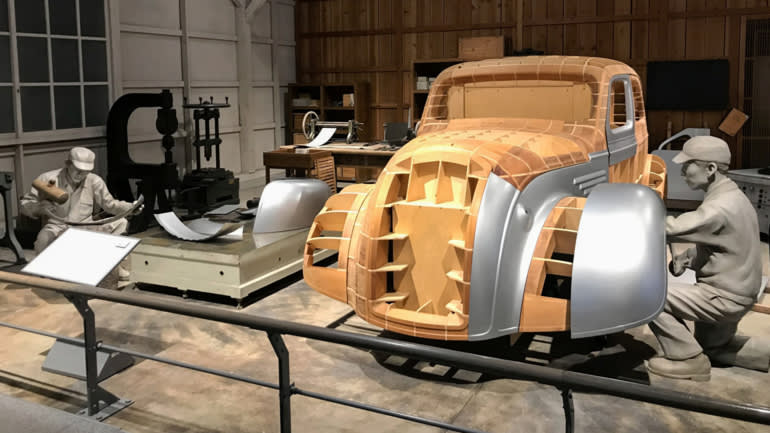 Visitors can learn about the history of Toyota’s carmaking at the Toyota Commemorative Museum of Industry and Technology's automobile pavilion. (Photo by Ko Fujioka)

At the Toyota Commemorative Museum of Industry and Technology in Nagoya, visitors can learn about the history of the Toyota group. There one can feel the spirit of the original company, which began life as a manufacturer of looms before its transformation into an automaking giant. The museum is on the site of the main factory of former Toyoda Spinning & Weaving, which was established by Sakichi Toyoda, founder of the Toyota group.

Since its opening in 1994, the 100th anniversary of the birth of Kiichiro Toyoda, Sakichi's oldest son and the founder of Toyota Motor, about 6.3 million people have visited the museum. Overseas visitors from more than 100 countries and regions accounted for 18% of the museum's 420,000 patrons in 2018.

The automobile pavilion shows the history of Toyota's carmaking business and the technologies used by the company from its beginnings to the present. The Hikawa Maru attracts tourists from the West and China. (Photo by Keigo Yoshida)

The Hikawa Maru went into service in 1930 as a state-of-the-art passenger and cargo ship sailing between Yokohama and Seattle on the U.S. West Coast. The first-class dining area is ornate. Among its more famous passengers were Albert Einstein and Charlie Chaplin. Nikka Whisky founder Masataka Taketsuru chose Yoichi as the site of his distillery because its climate is similar to that of Scotland. (Photo by Kotaro Igarashi)

The Nikka Whisky Yoichi Distillery was built in Yoichi on the northern island of Hokkaido by Masataka Taketsuru, founder of Nikka Whisky. The distillery used a method that Taketsuru learned about in Scotland. Since it began making whisky in 1936, the distillery's pot stills have been heated with coal to ensure a full-bodied flavor, a method now rarely seen.

There are nine buildings on the grounds of the distillery registered as tangible cultural properties, including a house where Taketsuru lived with his wife Rita that was relocated to the site. Especially worth seeing is the distillation building, where seven pot stills stand in a line. Skilled workers regularly shovel coal into the stills to keep them fired. A reproduction of Mitsubishi Tanabe Pharma’s early Meiji-era store, which doubles as a museum, attracts visitors. (Photo by Tatsuro Miyazumi)

Osaka's Doshomachi is a district where medicines have been sold since the Edo period (1603-1868). It is also the birthplace of Japan's modern pharmaceutical industry and home to drugmakers such as Takeda Pharmaceutical and Shionogi.

Mitsubishi Tanabe Pharma, founded 342 years ago, is said to be the world's second-oldest drug company. The company's historical museum, located at its head office in Doshomachi, is a wooden, tile-roofed replica of the company's store in the late 1800s. It retains the architectural style of the Edo period. The meticulous reconstruction is based on old photographs and welcomes visitors with the voice of a man speaking in the accent of old-time Osaka merchants.

More than 6,000 people visit the museum annually. About 10% of visitors come from abroad, most of whom are Asian students in their 20s. Young people eager to develop pharmaceutical industries in their own countries ask many questions about the secret of the company's longevity. 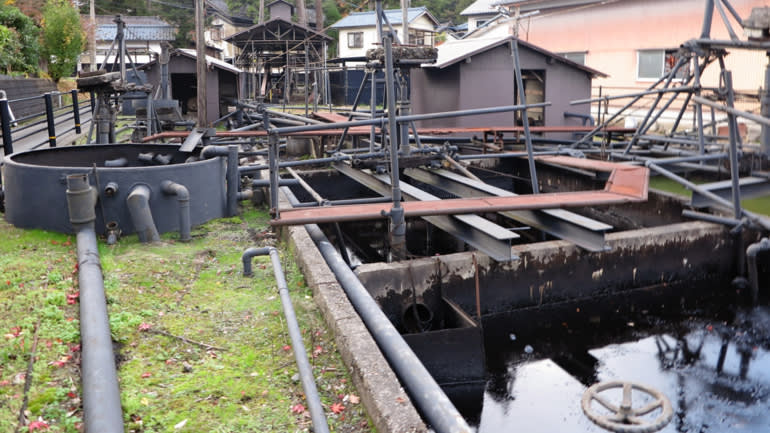 The oldest oil well in the Kanazu area is now surrounded by houses. (Photo by Sotaro Yumae)

Niigata's Akiha Ward prospered along with Japan's oil industry. At the Kanazu well site in the ward's Niitsu oil field, towering derricks and brick-clad tanks date back more than 100 years, recalling the days when the oil field was Japan's biggest producer.

Although the field ceased production in 1996, the Niigata city government took steps to preserve the Kanazu well site, which has been designated a historic site by the central government. In April 2019, Saudi Aramco, Saudi Arabia's state-owned oil company, contributed about 22 million yen ($200,000) to the city through its Japanese subsidiary to help Niigata promote its history as a center of Japan's oil industry. Coins from many countries and eras are on display at the Mint Museum in Osaka. (Photo by Daisuke Ito)

The Japan Mint in Osaka, which makes 5-yen and other coins, was the birthplace of Japan's modern monetary system. It began minting coins in 1871, as Japan's new Meiji government aimed to restore the country's economic stability, which was disrupted toward the end of the Tokugawa shogunate.

A Western-style brick building on the grounds of the mint that originally housed a power plant has been converted into a museum that presents the history of the mint. It also has coins from many countries and eras on display. Visitors can also tour the mint itself and see coins being made. A group of Chinese visitors listens to a presentation by an official at Inamori Library in Kyoto. (Photo by Kosuke Toshi)

Inamori Library is located next to Kyocera's headquarters in Kyoto. It was completed in 2013 with the aim of promoting the achievements and management philosophy of Kazuo Inamori, founder and chairman emeritus of the industrial ceramics maker. Visitors can view Inamori's notebooks, the company's first cathode-ray tube TV components and many other items.

The museum drew around 15,800 people in fiscal 2018, about four times as many as when it opened five years earlier. About 80% of visitors are from abroad, most of them Chinese.

"The number of businesspeople who want to learn Mr. Inamori's management philosophy ... is increasing," said a senior executive at the China Japan Industry & College Investment Promotion Center in Tokyo. In China, a new translation of Inamori's book "Ikikata" (published in English as "A Compass to Fulfillment") became a big hit in 2009.