The Pavilions Phuket, a five-star resort on the Thai island of Phuket, is aiming to roar back after the coronavirus pandemic kept tourists away last year. (Photo courtesy of The Pavilions Phuket)
IAN LLOYD NEUBAUER, Contributing writerAugust 23, 2021 11:56 JST | Southeast Asia
CopyCopied

PHUKET, Thailand -- Hotel operators just about everywhere have had a tough time during the pandemic, but perhaps nowhere more so than in the tourist-dependent economies of Southeast Asia.

Their primary customer base, cashed-up foreign tourists, has been wiped off the map and eight out of 10 hotels in the region closed when COVID-19 began spreading, according to property consultancy Colliers.

Now, many of those that reopened have been dragged into price wars to lure domestic travelers but overall numbers fall far short of recovery. Occupancy rates in Indonesia's Bali, for example, averaged 10% in the first four months of this year, while a recent survey by The Nation newspaper in Thailand found 47% of hotels in that country have just enough cash to last about three months.

And things are about to get even tougher.

The Top Hotel Projects construction database shows 580 hotels with 153,751 rooms are in the pipeline across Southeast Asia, while slick new resorts by the likes of Raffles and Hyatt's boutique arm Andaz have already opened. That means "older" hotels will have to raise their game to compete when international travel picks up, as many hope, next year.

"A lot of properties right now are just holding on. But they'll need to do more than hold on to survive," said Bill Barnett, founder of C9 Hotelworks, a globally recognized hospitality adviser on the Thai island of Phuket. "They need to develop new services and activities to keep consumers interested, and you cannot do that when your rates are so low."

A small number of hotels are innovating anyway, not by throwing money at things as they did in the past but with creative ideas aligned to sustainability principles or emerging tech. Take the Four Seasons Resort Bali at Jimbaran Bay. Set on 14 hectares of manicured gardens that roll down to a beach and coral cliffs on the Indonesian island of Bali, the 156-villa property has enjoyed 65% occupancy since opening in 1993 with an average room rate of $800 per night. 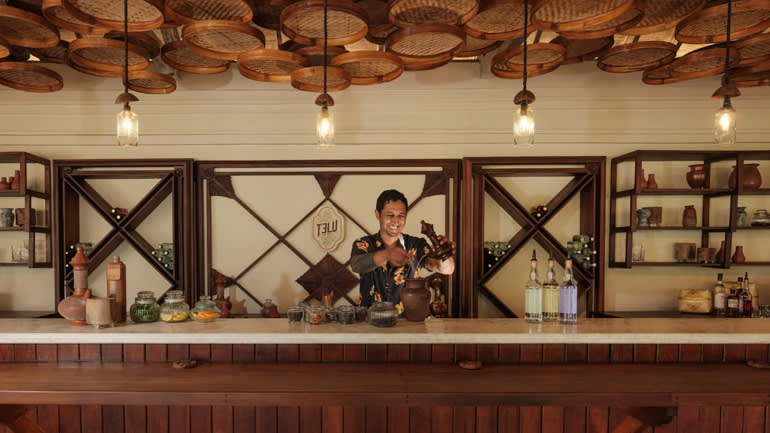 It's a rare example of longevity in an exceedingly fickle market, and credit goes to the owners' policy of spending big on renovations and new attractions like the Healing Village Spa that opened last year. A sprawling, multistory complex with high-tech light therapy contraptions cut straight out of Star Trek and its own soundtrack composed by Gus Till -- a music producer who has worked with the late Michael Hutchence and Bono -- it cost $5 million to build.

But with occupancy stuck at the single-digit level for a year and a half, there is no budget for upgrades. So one can imagine how general manager Uday Rao reacted when a bartender approached him with the idea of turning an unused garden villa into a cocktail school and bar dedicated to arak, Bali's traditional palm-sap spirit.

"I told him, 'you know we don't have any money for this,'" Rao recalled. "But he said he won't need much money because it would be a zero-waste concept -- not just for the cocktails. The fit-out will all be made from recycled materials. I couldn't say no."

Fixtures, fittings and furniture for Telu, as the venue is called, were scavenged from the resort's storehouses and polished and painted by hand. Glass bottles were upcycled and filled with artesian arak, distilled on-site in clap pots and infused with herbs planted in the cocktail garden. Now, guests can learn about the traditional and medicinal benefits of arak and how to make their own zero-waste cocktails with herbs they pick from the garden.

"Let's be honest, there are beautiful hotels and villas all over Bali," Rao says. "When it comes down to what makes them different, it's the experiences we create. That's why we're constantly trying to do things that are unique and different."

An hour's flight east of Bali on the remote Indonesian island of Sumba, Nihi Sumba is a small villa-only resort with top-shelf features like jet skis to ferry surfers out to waves and a stable full of Sandalwood-thoroughbred horses.

With 66% average occupancy and room rates hitting $16,595 per night, it was one of the world's best-performing hotels before the pandemic. Nihi Sumba was named the best hotel in the world by Travel + Leisure magazine's annual reader's poll in 2016 and 2017. But early last year the party came to an end when Indonesia closed its borders to international tourists to stymie the spread of COVID-19. Nihi Sumba closed. When it reopened four months later it had to build an entirely new customer base from scratch: wealthy Indonesians who normally holiday overseas.

"We had to drop our prices by half but we didn't sacrifice the guest experience," resort manager Madlen Ernest of Austria said. "We enhanced it by activities we previously charged separately for like massages and horse riding." Nihi Sumba on the Indonesian island of Sumba was named the best hotel in the world by Travel + Leisure magazine's annual reader's poll in 2016 and 2017. (Photo courtesy of Nihi Sumba)

"We made it our mission to massively cut down on ingredients we fly in from Bali and source things locally," Ernest said. "And we hired a consultant to help us get more serious about our organic garden. We planted a fruit forest, built a nursery, a composting center and a reservoir -- part of an overall strategy to adopt regenerative agriculture.

"By the time it matures, two-thirds of our fruit and vegetables will be grown in-house," she added. "And the fruit forest will become a new attraction for our guests with things like walking tours and kids harvesting experience."

Some 3,200 km to the northwest, Phuket welcomed 10 million foreign tourists in 2019 -- making it the 14th most visited place on the planet. Then came the pandemic. By the end of last year, monthly foreign arrivals fell off a cliff, down 99.8%, official data shows. Only 700 tourists visited the island in the first half of this year, about the same that walked through immigration at the island's international airport every 40 minutes before the pandemic.

But there is some light at the end of the tunnel. Launched July 1, Phuket's Sandbox experiment, which allows vaccinated tourists to holiday without quarantining, attracted 15,000 foreign visitors in its first month. Arrivals must spend their first 14 nights in Thailand in an accredited "sandbox" hotel such as The Pavilions Phuket, a five-star resort with 95 villas and suites. Set on one of the island's highest points, the hotel did a roaring trade from 2008 until 2020, with an average room rate of $290 per night. But last year it shut for six months.

"We had a bit of time on our hands and were brainstorming about how we can evolve, and one thing that came to mind was bitcoin," said Scot Toon, managing director for Asia of The Pavillions Hotels and Resorts, a collection of 14 global properties. "Retailers have been accepting bitcoin for a while, and Tesla has just announced they would accept bitcoin for their cars. We thought why aren't we moving into the space? So, we spoke to a few merchants, found the right one in the U.K. to manage our transactions. Now we can accept bitcoin in over 40 different currencies."

Sandbox guests have single-handedly lifted The Pavilions Phuket average occupancy for 2021 to 41%, including bookings through to Dec. 31. Not a single guest opted to pay with bitcoin but general inquiries at the hotel increased by 20%.

"Cryptocurrency is not going anywhere, it's here to stay," Toon said. "Someone in the industry had to take the initiative and lead. We're very happy to say that we're the first hotel group in the world to accept bitcoin."