"This quietness has immersed me in my job," said Masashi Arai, on left, who enjoyed a workation in Toba in Japan's Mie prefecture. (Photo courtesy of Fixer)
ERI SUGIURA, Nikkei staff writerAugust 24, 2020 19:36 JST | Japan
CopyCopied

TOKYO -- Bright sunlight and a distant horizon were the first sight that greeted Masashi Arai each morning from his hotel window in the seaside town of Toba, in central Japan, a stark contrast from the steel and glass towers Arai normally sees from his Tokyo Bay office -- and the perfect place to combine six weeks of work and leisure.

"This quietness immersed me in my job," Arai told the Nikkei Asian Review.

The young engineer was in Toba with five colleagues from cloud system developer Fixer for a "workation." These working vacations let employees do their jobs from hotels and resorts, and enjoy a bit of vacationing in their spare time. Fixer, a 10-year old company, sought to use the opportunity not only to train its engineers but to make sure its business can operate smoothly outside its headquarters.

The week on the job in a tranquil setting, followed by weekend excursions, offered Arai and his colleagues a chance to discover a new way of working. "I could go for a walk on the beach when I needed a break," said one.

Fixer has been promoting remote work for several years, but Chairman Takashi Nomura said workations offer a way to lift employee morale while simultaneously dealing with the coronavirus outbreak. The working vacation "spurred us to maintain our operation, while ensuring the safety of employees," Nomura said.

The workation concept has been slowly catching on in Japan, which is notorious for its long working hours and employees who leave unused vacation time on the table. Some prominent companies, including Japan Airlines, have introduced working vacations to encourage employees to take more time off. The idea is to lower their stress and raise their productivity.

The coronavirus pandemic has shown that it is as easy to work from a nice hotel as from home.

The government, which wants to rebuild Japan's shattered tourism industry, likes the idea. "It is necessary to support the Wi-Fi infrastructure so that people can work at hotels, as well as spread out holidays and encourage people to take vacations," Chief Cabinet Secretary Yoshihide Suga said in July.

Hotel operators are also eager to take advantage of the trend. Kiku Ezaki, owner of Kaigetsu, the Japanese-style inn where the Fixer employees stayed, replaced the traditional futon with a desk and a bed in six of its ten rooms in June so that guests can work or rest at any time of day. Ezaki also helps plan activities such as kayaking tours to deserted islands to give the workers something to do during their time off.

"Workations have a great future for us," Ezaki said, who has received several more such guests since hosting the people from Fixer. Ezaki plans to renovate the hotel's balconies so that guests can work outside with an ocean view. 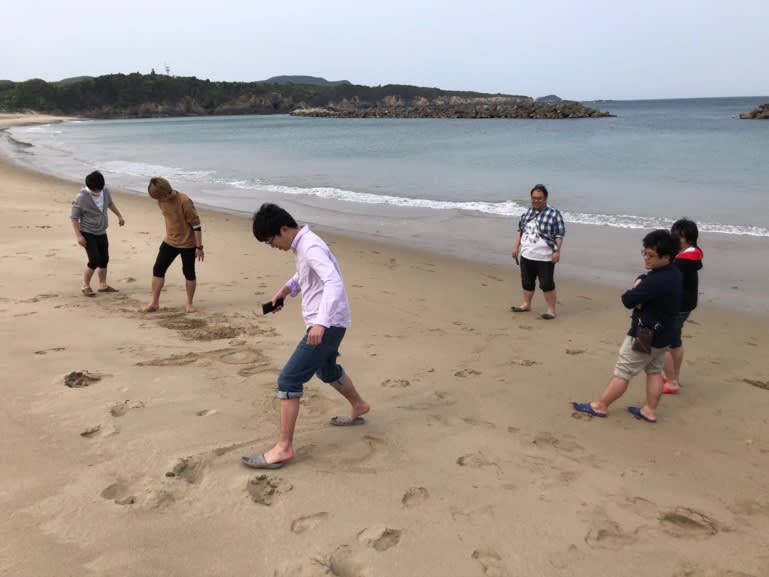 Fixer employees worked during the week at a Japanese-style inn in the central prefecture of Mie. On the weekend, they went on excursions. (Photo courtesy of Fixer)

According to the Japan Tourism Agency, sales volume at 48 of the country's largests travel companies was down 92.9% on the year in June. The industry has shown few signs of recovery since the government lifted a state of emergency in late May. Japan has closed its borders, leading to a 99.9% year-on-year drop in foreign visitors for four straight months through July.

Many Japanese tend to travel at specific times during the year, particularly during the summer or at year's end. This raises prices and puts many people off traveling at all. In 2019, Japanese workers took the fewest paid holidays among 19 countries and regions, according to a survey published in July by online travel agency Expedia Japan. They took, on average, only half their allotted vacation time.

The government, which in July launched a 1.3 trillion yen ($12.6 billion) domestic travel campaign, is also providing subsidies to businesses that offer workation services, including campgrounds at national parks.

Some big players in the travel business, which were touting the benefits of working vacations even before the pandemic, are now making a bigger push. JAL will combine workations with corporate social responsibility activities, starting in October. Under a joint project with a startup, around a dozen of its employees will visit areas in the countryside. They will be working remotely, but also engaged in farming and other businesses.

"We are also seeking to discover and adjust to new types of travel demand after the coronavirus," said Yasuhiro Iwata, a JAL spokesman, as corporate travel has been severely dented in Japan. It is unclear whether business trips will bounce back to pre-pandemic levels after the virus has subsided.

The airline introduced workations in 2017. It allows employees to log onto their PCs during holidays, letting them count the time away from the office as work day. It also lets employees take holidays while on business trips, saving them the cost of transportation.

West Japan Railway will start a trial in September with a startup, allowing 90 participants to take workations with discounted fares. The bullet-train operator's venture capital arm has invested in the startup to "create new railway demand that cannot be captured by conventional commuting and tourism," said the company.

JAL, together with a consulting unit of NTT Data and travel company JTB, published a study of a three-day working vacation involving 18 participants in June in Okinawa. The findings, reported the following month, showed a 20% rise in productivity and a 37% reduction in stress.

"Workations encourage people to produce output in an efficient way so that they can enjoy their free time afterward," said Kazuyuki Yamazaki of NTT Data Institute of Management Consulting, one of the study's co-authors. "Some people believe workations mean working lazily during holidays, but that is not true. It enables teleworking and maintains [people's] physical and mental health, as well as productivity," Yamazaki said. 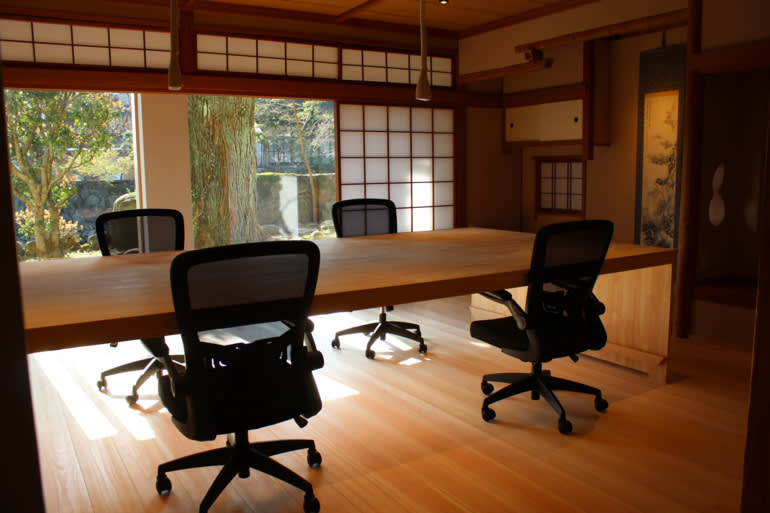 One of the rooms in the Wataya Besso inn has been rented out to a Tokyo-based marketing company as a satellite office. (Photo courtesy of Wataya Besso)

Japan's Pasona will start connecting hotels with companies looking for rooms that can double as workplaces. The human resources company believes demand is emerging for a new workstyle amid the pandemic and that it can help meet some of this by matching companies with hotels whose occupancy rates have plummeted. It will collaborate with 16 hotels across Japan, including the Hilton Tokyo, and offer information on Wi-Fi speeds and sanitization measures.

A similar trend is already taking place on U.S.-based Airbnb. The leading private accommodation platform presents some Japan properties that allow long stays and can be used as workspaces. The bulk of its bookings are for entire houses or villas, and homes with ocean views or surrounded by nature are becoming increasingly popular, the company said.

But for workations to really catch on, some obstacles must be overcome. Fixer paid the full cost of its employees' stay. For companies that cannot bear those costs, it is lot to ask employees to pay for what can amount to several weeks of accommodation out of their own pockets. Personnel management is another potential snag.

These concerns have not dimmed the enthusiasm of proponents. "As more companies introduce remote working, they will be able to reduce costs for office space and business trips. These can be then earmarked to help promote workations for employees," Kei Shibata, CEO of online travel media company Venture Republic, told Nikkei.

Shibata said workations would spread employee holidays more evenly through the year and "could also encourage foreign tourists to have longer stays in Japan" once they return. Increasing the spending of overseas visitors has been a challenge for the government as it has tried to boost inbound tourism over the last couple of years. Encouraging longer trips is key.

"Ryokans (inns) and hotels provide a perfect environment for a workspace," said Yoshimoto Kohara, who owns Wataya Besso, an inn in the town of Ureshino on Japan's southern island of Kyushu. Kohara has been renting one of the inn's 130 rooms to a Tokyo-based marketing company as a satellite office since March. The room is equipped with a long desk for work. Employees who work at the office can take a hot spring bath and enjoy delicious local food every day. "It is the perfect form of relaxation for these workers," said Kohara.