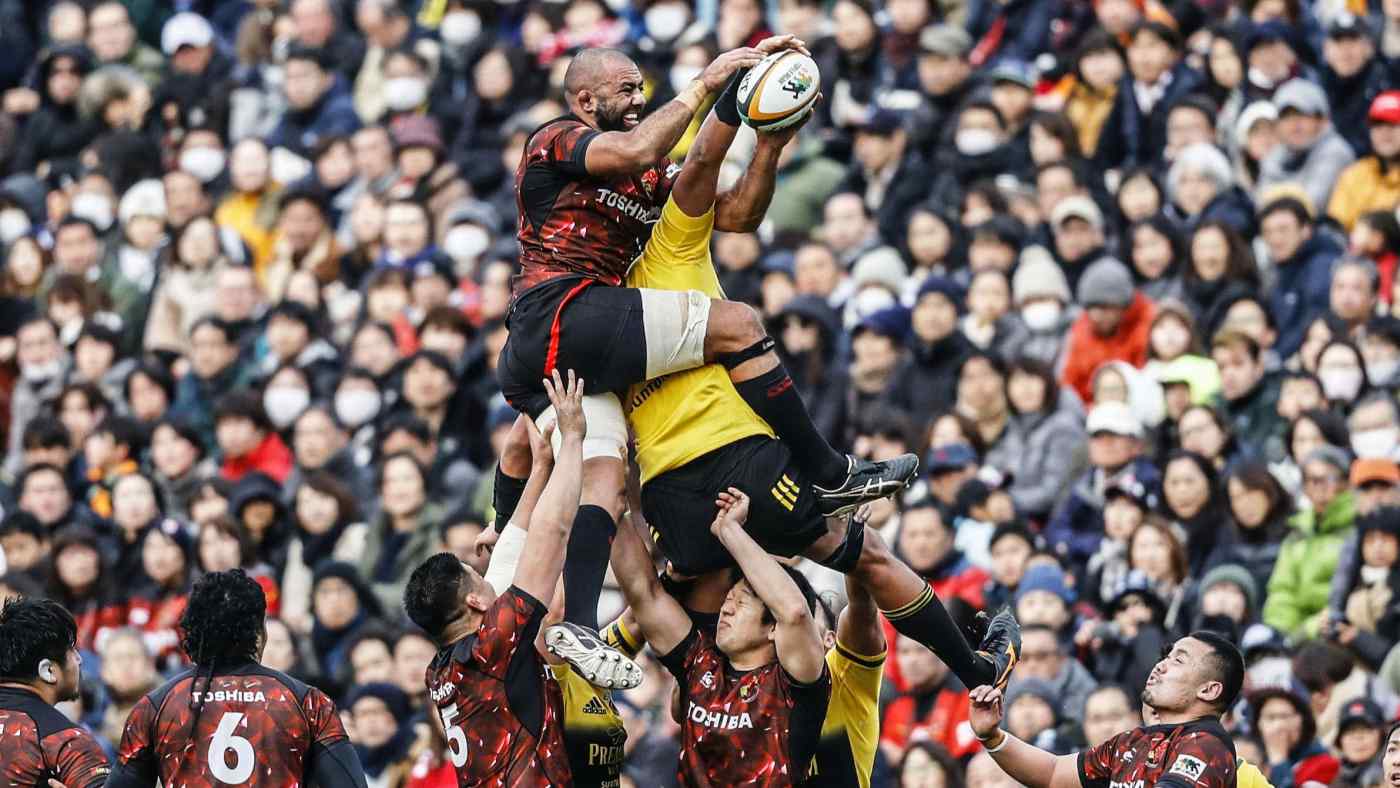 Michael Leitch, center, competes in a Top League rugby match during the 2020 season. This year's season kicks off on Feb. 20 after being delayed more than a month by the coronavirus pandemic.   © Kyodo
ERI SUGIURA, Nikkei staff writerFebruary 19, 2021 15:11 JST | Japan
CopyCopied

TOKYO -- Japan's premier rugby division kicks off a delayed season this weekend with teams and their corporate owners hoping to put the sport on the path to professionalism by turning post-World Cup popularity into greater commercial appeal.

Fans are delighted at the chance to see live top-level games after last season was cut short by COVID-19 and this year's opening was pushed back from Jan. 16, with more than 60 players and staff testing positive for the coronavirus.

"The sound of the players colliding is one of the big attractions of rugby, so I'm really looking forward to watching the game at the venue," said a fan in her 30s with a ticket for one of the opening games -- Kubota versus Sanix -- near Tokyo. "I don't go out except for work and shopping, so I want to take all possible measures against infection and enjoy watching the game. I hope all the matches can be played to the end the year."

Japan caught rugby fever after the 2019 World Cup, where the country reached the quarterfinals for the first time and the national team, the Brave Blossoms, became celebrities. That enthusiasm sparked record Top League attendances last year, with average gates of 11,000.

It also propelled the country into the spotlight as a stage for some of the game's top stars. Many joined for the truncated 2020 season and more are now set for their Japan debuts, albeit in front of limited crowds. Ryoto Nakamura practices with his team, Suntory Sungoliath, on Feb. 9, a little over a week before the first match of the 2021 Top League season.   © Kyodo

"As players, you have to just try and be mentally and physically ready when the time comes to play," said Greig Laidlaw, the former Scotland captain. "We're looking forward to getting started." Laidlaw joined NTT Communications last year on a two-year contract.

A veteran of the two most recent World Cups, he said Japan's strong showing at those events created a "knock-on effect," attracting more players and coaches from overseas as well as raising participation domestically. "It spreads excitement and confidence at the grassroots [and] university level. The more people playing the game, the more people enjoying the game. That's brilliant for Japanese rugby."

The involvement of stars like Laidlaw points to the financial muscle behind Japanese rugby, but also hints at doubts over its long-term viability.

Top League teams are owned by major corporations such as Toyota Motor, NTT Communications and Canon, with most players classified as amateurs who are employees of these corporate owners -- except for some foreign players with lucrative professional contracts.

But this corporate attachment has been cited as a hindrance to broadening the game's appeal among the public, and the financial relationship is not seen as sustainable.

From 2022, a new three-tier league will be established with the aim of creating teams that are tied more to their communities, similar to Japan's professional baseball teams, many of which have substantial corporate backing.

"We have a big goal of bringing the World Cup to Japan again and becoming the best in the world," said Kensuke Iwabuchi, chairman of the Japan Rugby Football Union, at a press conference in January. "To this end, developing the domestic leagues will be a major factor."

Mayumi Taniguchi, director of the league's development office, said a planned host-and-visitor structure was the centerpiece of the new league. "Playing to home crowds in cities and towns that host their own team will offer an opportunity to earn revenue," she said.

Each team will be responsible for selling tickets and attracting sponsors, as well as obtaining their own 15,000-plus seat stadiums by 2024 -- the 12 stadiums used for the World Cup could be among the candidates. However, the league will not require professional contracts for players or for teams to be turned into independent entities.

This falls short of what Katsuyuki Kiyomiya, vice president of the JRFU, has been pushing for. He wanted to launch a fully pro league in autumn 2021, with the goal of generating annual revenue of 50 billion yen ($471 million) through media rights and sponsorship deals.

Many argue that even the less ambitious transition is slow and that the path to a fully professional league remains unclear.

"Creating consensus among the various stakeholders -- including the JRFU, teams, players, sponsors and fans -- takes a very long time," said Kazumasa Ashihara, a sports business consultant who has been involved in founding Japan's professional basketball league. "But defining what is meant by 'pro' is important in order to have a common objective."

While not stipulated by the JRFU, some companies, including Panasonic, have already established a new division for rugby operations to expand the activity as a business.

"As the number of spectators increases and commercialization develops, we hope to establish a system that will allow us to become professional in the future," said Eiichi Katayama, who oversees Panasonic's sport management, in September.

Players generally welcome this move for the new league. Shin Kawamura, a player at NEC who has been heading the Japan Rugby Players Association as chairman since April, said teams making money on their own would be a chance for Japanese rugby to "demonstrate that the sport is economically viable while it has social significance."

"It is a good thing to develop a sense of earning money healthily, as the current system has not been financially sustainable," Kawamura told Nikkei Asia.

Corporate owners provide generous support for their teams as part of their corporate social responsibility activities. They generally spend "around 1 to 2 billion yen every year to operate a single team. ... Even if that works today with the company's solid performance, can it really continue to do so for the next 10 to 20 years?" consultant Ashihara said.

In the new league, member companies will still be expected to provide financial support, but each team will also be urged to make its own money. What is at stake is whether the team is able to generate enough revenue to reduce the corporate burden. 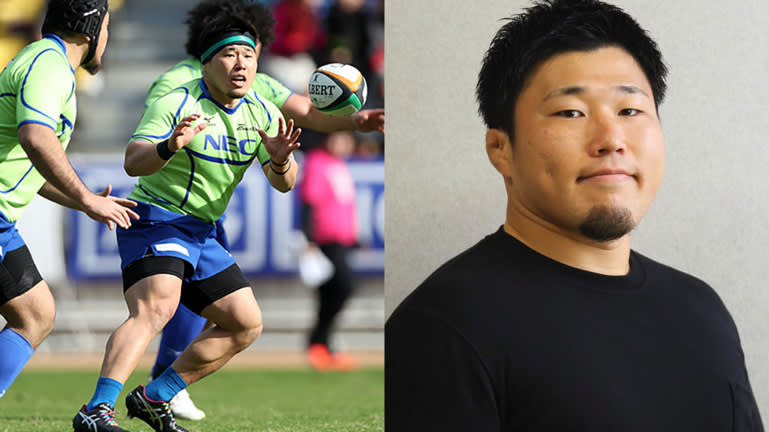 Professional sports contracts would also mean a very different working environment for players. Many of these employee-athletes, once their playing days are over, simply switch to a job within the company. This would no longer be possible if they become professional players.

"Each player has a different opinion," Kawamura said, acknowledging some players' concerns about the new league. "But the JRFU has said we aim to become the best in the world with the new league. Everyone, including players and staff, understood that the value of rugby in Japan increased as the Brave Blossoms made that leap forward at the World Cup 2019."

Kawamura continued: "If management professionalizes first, I think players will also eventually look to turn pro, as they will see that they can earn more money with more effort. But of course, it depends on what each player wants as a career path. It's only in Japan that top rugby players have a guaranteed second career waiting for them. Some players think there is no need to relinquish that."

The association is now piloting a program that sends mentors to players seeking advice on both personal and rugby-related matters.

Turning professional, of course, does not guarantee immediate success. Rugby, where clubs need more players than in soccer or basketball but can play fewer matches due to its physically demanding nature, is often considered less lucrative than other sports.

In the U.K., for example, Exeter Chiefs were the only one of Premiership Rugby's 13 shareholder teams to turn a profit last season, according to the Financial Times. Rugby clubs are more reliant on ticket revenues than soccer's Premier League, which generates more money from broadcasting deals.

"So many foreign players are now coming to Japan, partly because Japanese companies pay high salaries," said Ashihara. "But can companies really maintain this?" he added.

But while the future of rugby in Japan remains uncertain, players are not losing sight of the most immediate task: playing competitive, crowd-pleasing rugby.

"I'm really excited to show fans our best at the Top League [from this weekend]," Kawamura said.