Japan's Kansai Airport to be reborn as inbound tourist hub

Departure area for international flights will be made 60% bigger OSAKA -- Kansai Airport will expand its capacity to handle international visitors as part of a planned upgrade, as the Osaka-area hub prepares for an uptick in arrivals for the 2025 World Expo and planned casino resorts.

The airport's Terminal 1 will expand its international departures area by 60% to claim space on the second floor along with the third and fourth, where it currently occupies. Departing foreign visitors who have gone through security will walk through duty-free shopping toward eateries, lounges and enlarged commercial facilities, giving them more souvenirs to choose from.

Kansai Airports, which operates the international flight hub and nearby cousin Osaka International Airport, is chasing growth at full throttle amid a rapid rise in visitors from overseas. It aims to be able to accommodate about 40 million international travelers per year-- nearly 17 million more than in fiscal 2018 -- after the renovation.

Security areas will grow to include 22 "smart lanes" designed for screening multiple travelers at once. Departure procedures are to be streamlined, and smart lanes will be added to serve domestic flyers as well.

The terminal's total floor space will remain roughly the same, with pre-security commercial facilities losing ground to make way for the changes. The overhaul, due to start as soon as next year, is expected to cost about 100 billion yen ($918 million) including countermeasures against natural disasters. 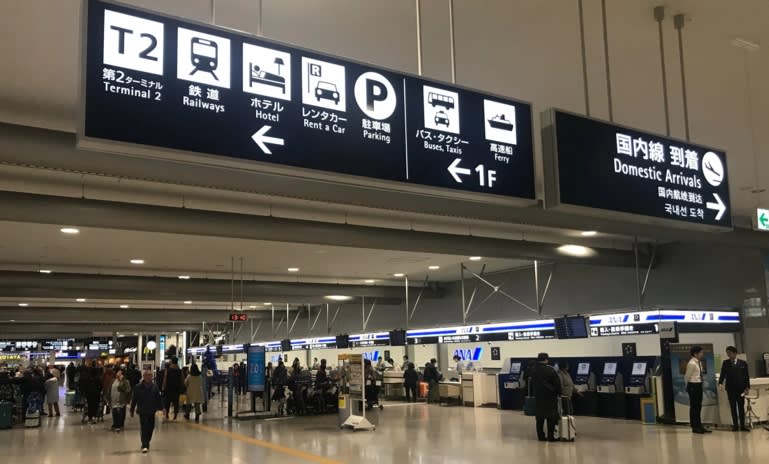 The aiport's Terminal 1 will be reconfigured to accommodate more inbound passangers. (Photo by Hirofumi Kanaoka)

Changes in the airport's customer makeup are the major reason behind the overhaul. When the airport opened in 1994, the initial plan was to abolish the nearby Osaka airport and turn Kansai into a hub for the region. Terminal 1 was designed on the assumption that roughly equal numbers of passengers would be flying international and domestic. The gates for domestic flights are therefore located at the center of the second floor, which is directly connected to a train station.

Kansai Airports CEO Yoshiyuki Yamaya says the airport is highly regarded as a gateway for travelers visiting Japan. But facility improvement to ease congestion has become an urgent matter. In addition to the 2025 World Expo, Osaka is also slated to host integrated resorts with casinos. Inbound tourists are expected to rise further.

But challenges lie ahead, starting with time. The impact of last year's typhoon delayed the announcement of the expansion plan. Completing the project in a short time at the always-crowded airport will prove "a tightrope walk," a person familiar with the plan said. A timetable for construction is expected to take about six months to flesh out.

Thought will also need to be given to Kansai Airport's role beyond 2025. The operator sees expanding Terminal 2, a hub for budget airlines, as an eventual goal.

"There will need to be an expansion of ground facilities and an easing of restrictions on hourly takeoffs and landings," an insider said.

Meanwhile, the airport's foreign-tourist-dependent growth strategy is showing signs of strain. Foreign visitors grew just 1% on the year in October, with higher traffic from China offsetting some of the decline from frosty Japan-South Korea relations. Relying less on Korean tourists will pose a challenge for the airport.