HIROSHIMA, Japan -- Local governments at some of Japan most popular tourist hotspots are considering extra taxes on visitors to protect the environment and help deal with overtourism.

Hatsukaichi in Hiroshima Prefecture is home to Miyajima, known as one of the three most scenic places in Japan. The city aims to introduce a new tax in spring 2021, while areas in Okinawa are implementing levies of their own.

Japan has experienced a tourism boom over the past several years, straining the infrastructure of some places popular with overseas visitors. Overcrowded streets, heavier traffic and a shortage of restrooms, along with noise and waste pollution and environmental degradation, risk causing trouble between locals and visitors. The number of overseas visitors is likely to increase with the approach of the 2020 Olympics.

Hatsukaichi is considering an entry tax of 100 yen ($) for every person coming to Miyajima. It had mulled the same plan in 2008 and 2015, but shelved the idea both times.

But a steady rise in the number of tourists has prompted the city to reconsider. About 4.3 million people visited the island in 2018, roughly one million more than ten years prior.

The city estimates it will need about 1.5 billion yen in the next five years to address waste disposal, preserve the environment and improve the ferry terminal.

Miyajima had a population of 1,555 people as of November, down about 20% over the past decade. Public spending in the area has not been disclosed, but the city is "running a deficit of about 300 million yen," a high-ranking city official said. "The city's revenue isn’t increasing in proportion to the sharp rise in the number of tourists."

The city hopes the new tax will make up the shortfall. 100 yen per person from 4 million tourists would net the city 400 million yen per year, more than enough to close its deficit. 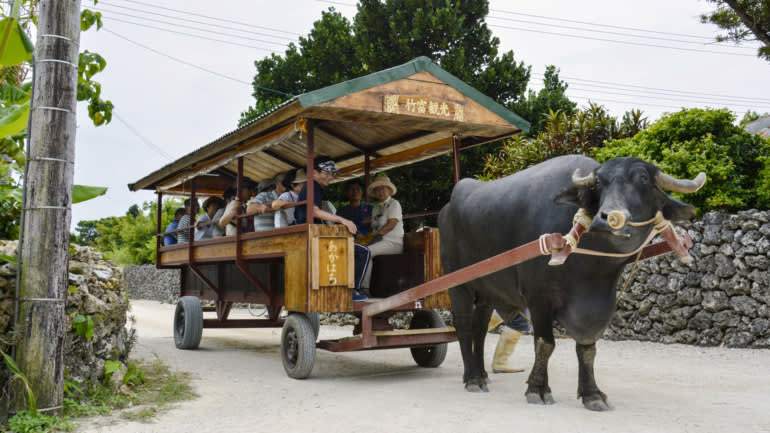 In Okinawa Prefecture, four islands have already introduced an entry tax. Tokashiki and Zamami in the Kerama Islands, where marine sports are popular, are among them. They collect 100 yen per entry, which is added to the ferry fare.

Izena village, which has a population of about 1,400, was the first local government in Japan to introduce such a tax in 2005. It has since been generating revenue of about 4 million yen annually from the levy, but it is difficult to impose it on tourists only -- local residents who travel back and forth to mainland Okinawa contribute nearly half the revenue.

The village said they gained public understanding by explaining that the collected money is used to cover the cost of maintaining the environment. The tax has not caused a drop in tourist traffic there. An island entry tax has been added to all fares on ferries run by the village of Izena, Okinawa Prefecture.

It is not always so easy to convince residents of the benefit of the tax. In Hatsukichi, the ferry to Miyajima is only 360, so a 100 yen tax could be a burden for resident who use the boat regularly, for example to commute to work or go to hospital for regular treatments.

"Gaining the understanding of local residents is the biggest issue," said the senior city official.

And after that, implementation can remain a challenge. The town of Taketomi in Okinawa introduced a 300 yen entry fee for tourists, but not residents. Visitors pay the fee on a voluntary basis using machines at the port.

The island welcomes about 500,000 tourists per year. The town estimated it would earn about 60 million yen from the fee if 40% paid, but so far it has collected payment from only about 20%.

In November, the town started improving the situation in response to visitors’ comments. Some thought the ticket machines were difficult to find, for example, while others thought the fee was included in the ferry fare.

"There are various ways to secure revenue sources, but taxes are examined for fairness," said Namiko Numao, professor of local public finance at Toyo University. "It is necessary to show that the tax benefits not only tourists but also local residents."