Japan's latest work trend is also its latest big-league sports trend. Fans with corporate jobs are making sure they get to the stadium before game time by showing up in the morning and using the venue as a remote office. (Photo courtesy of Yokohama Stadium)
KOSUKE SHINOHARA, Nikkei staff writerMay 21, 2022 14:00 JST | Japan
CopyCopied

SAITAMA, Japan -- Pro baseball and soccer teams in Greater Tokyo have hit on a way to make money from their stadiums when the big edifices are not being used for their intended purpose -- let fans use them as a remote work station.

It turns out Tokyoites are willing to pay to pound their keyboards in skyboxes.

Corporate warriors were allowed to occupy suites at Yokohama Stadium from 9:30 a.m. to 3:30 p.m. on game days.

The boxes are behind home plate and Wi-Fi is free, but the real benefit is for those planning to attend a game that night. After work, they won't have to rush to the venue and risk missing the first few innings; they'll already be there.

The remote workers are required to depart the stadium before game time, and those wishing to stay for the game need to buy tickets.

The team first made the suites available for five days in April, and the available space almost sold out. Fans loved being able to instantly shed their button-down employee status and transform into boisterous spectators, according to the club. So popular was the arrangement that the BayStars added nine more suite deal dates in April.

The program has been a revelation for a club that has been searching for ways to generate revenue from its stadium when ballgames are not being held, a BayStars representative said, adding that the team will keep offering its work from the ballyard service. Tokyo Dome, home of the Yomiuri Giants, has set up workspaces and made them available in the mornings and afternoons before Giants games.   © Kyodo

The idea has caught on. Tokyo Dome, the home stadium of the Yomiuri Giants, began something similar in late April in collaboration with Mitsui Fudosan, a major real estate developer, and other parties.

Temporary workspaces were set up in the stadium and made available in the mornings and afternoons when the Giants were scheduled to play at night. The spaces were available to employees of companies that subscribe to Mitsui Fudosan's shared office service. Clients were allowed to attend a fitness event in the morning before settling into their bureau du jour in one of the dome's premium lounges.

Users said they enjoyed the unique office environment, according to Tokyo Dome.

Sports fans in other countries who can tell their boss they're going to leave work at 4 in the afternoon so they can get to the game on time might not fully appreciate why these programs have caught on in Tokyo. It is not uncommon for the corporate Japan workday to go to 7 p.m. or beyond, and few loyal employees duck out earlier than that.

Furthermore, it can be an arduous journey on multiple commuter trains to go from a central business district to the outskirts of the metropolitan area where many of the city's 10 big-league baseball and soccer teams have their venues, including Yokohama Stadium. For baseball games, which can start as early as 6 p.m., fans are almost guaranteed to miss the first few innings. 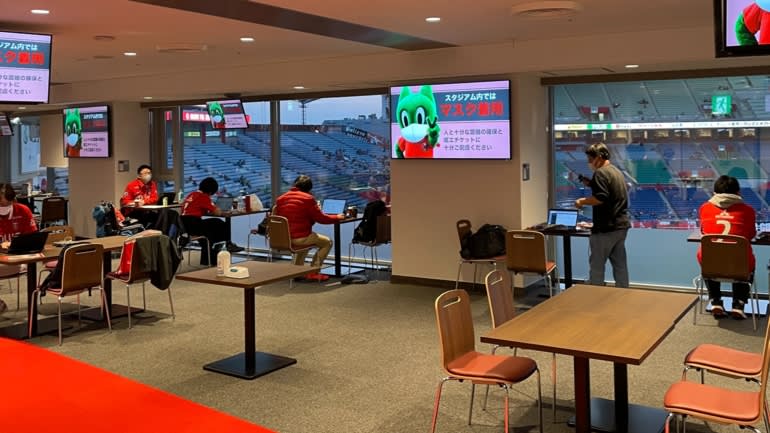 Company employees who decide to rent workspace in a restaurant overlooking the soccer pitch at Saitama Stadium say the venue helps them concentrate. (Photo courtesy of Urawa Red Diamonds)

The Urawa Reds usually start their home games at 7, and a club representative said the remote work program was meant to make it easier for supporters to get to the stadium on time.

Remote workers are allowed into a restaurant that overlooks the field at 10 a.m. and can remain at their perches until the game starts. Their vantage point, however, comes with distractions. First, the grounds crew might require some glances as they prepare the pitch. Then the stadium itself will come alive as fans, many wearing replicas of the home team's uniform, file in and color the stands red.

The stadium's remote workers, however, insist that this unique workplace actually puts them in a fresh mood and helps them concentrate on what they tell their bosses they are doing.

The Pacific League's Saitama Seibu Lions -- another team with a stadium on the rim of Greater Tokyo -- became the country's first professional baseball organization to sell shared workspace, doing so back in September. The club is now exploring ways to wring some revenue from Belluna Dome, its home ballpark, on nongame days. One idea is to let fans watch road games from inside the dome.

Sports clubs are not the only businesses to have sniffed out this particular opportunity. Hotels around ballyards are also seeking to capitalize on the trend by offering their own plans. And the Chiba municipal government is giving them a hand. It provides subsidies of up to 3,000 yen for users of remote-work plans offered by the city's hotels. The deal could benefit fans of the Chiba Lotte Marines, another Pacific League and edge-of-Tokyo team.

Fans who remotely work out of Hotel New Otani Makuhari or APA Hotel & Resort Tokyo Bay Makuhari can walk to Zozo Marine Stadium as soon as they close their laptops.