Japan's ski resorts fear it's downhill all the way The country's fine-quality snows had increasingly lured foreign enthusiasts over the last few years, but last year a historic snow shortage left many resorts under pressure. This season there is plenty of snow -- but the coronavirus outbreak and Japan's subsequent ban on foreign tourists are keeping most visitors away.

Some resorts are falling into bankruptcy, and industry experts suggest operators need to brace for a long winter of heavy price competition.

"Now should be the best season, but the number of visitors is very low," said a representative of a ski resort in the Niseko region of Hokkaido, one of Japan's most popular snow destinations. The resort usually welcomes 80-90% of its guests from abroad, mainly from Hong Kong and Southeast Asian countries such as Singapore, Thailand and Indonesia.

With core customers gone, the resort has been trying to cater to Japanese guests by launching discount lift tickets and altering restaurant menus -- offering less expensive dishes in smaller portions.

So far it has been to little avail. Many Japanese are staying home after a rise in COVID-19 cases, which led the government to issue a state of emergency in Tokyo and nearby areas last week. Seven other prefectures, including Osaka, were added on Wednesday to prevent further spread.

Alarm over the coronavirus caseload had earlier prompted the government to suspend the nationwide Go To Travel campaign, which offers subsidies of up to 50% for domestic holidays, in late December.

"We can't really help it unless the virus subsides," the representative added.

Another resort operator in Niseko said the number of customers more than halved this year from last year and complained of a wave of hotel cancellations after the suspension of the Go To Travel campaign, a signature policy of Prime Minister Yoshihide Suga.

Fine powder snow in Niseko and neighboring areas has attracted foreign investment, initially from Australia but later also from China and other countries, to build condominiums for long stayers from abroad. This lured Park Hyatt, Ritz-Carlton and other fancy hotel brands. The area has experienced Japan's biggest hike in land prices for six consecutive years through 2020, according to the National Tax Agency. 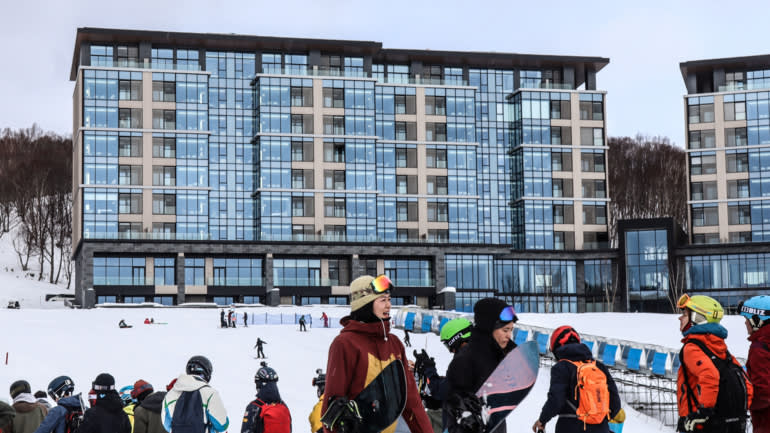 "Large and luxury condos operated by foreign entities have heated up the market in Niseko," said Yuichi Yamada, chief researcher at the Japan Travel Bureau Foundation. "A plan for a bullet train and a highway could sustain Niseko's development for the coming decade, but the sudden loss of foreign visitors is hitting condo operators extremely hard."

Many snow resorts in other parts of Japan last year suffered from weather that was around 2 degrees Celsius higher than usual from December 2019 through February 2020 nationwide. Snowfall along the country's western Sea of Japan coast was only 14% of usual levels, and there was only 7% of the usual level in drier eastern Japan.

With the added blow from the pandemic, some resorts are on the verge of collapse. Yubari Resort, operator of a snow resort and hotels in the Hokkaido city of Yubari, announced in December it would file for bankruptcy as COVID-19 cases increased on the island. Mizuho Resort, operator of one of the largest snow resorts in western Japan, suspended business in March. Many others have temporarily shut down their facilities to save costs.

Those that survived and have domestic visitors "are expected to take in demand for weekends with heavy discounting," Yamada argued. "This will turn out to be a big burden on their performance, but we can also say that it's better than not having snow, like last year."

The market for winter sports in Japan was already in a long decline from a peak in the 1990s. The country, which has the second-most ski resorts in the world, after the U.S., had around 5 million skiers and snowboarders combined in 2019, down 73% from 1993, according to the Japan Productivity Center, a think tank.

Blamed for the decline are the bursting of Japan's economic bubble, a more diverse range of leisure activities and a shrinking population.

Japan's recent boom in inbound tourism brought welcome relief. Hakuba, a famous winter resort location in Nagano Prefecture, welcomed a record 370,000 foreign visitors in the winter season from 2018 to 2019, four times as many as six years earlier. Overseas tourists accounted for a quarter of all visitors -- many of them from Australia and New Zealand and seeking a cheaper alternative to Niseko.