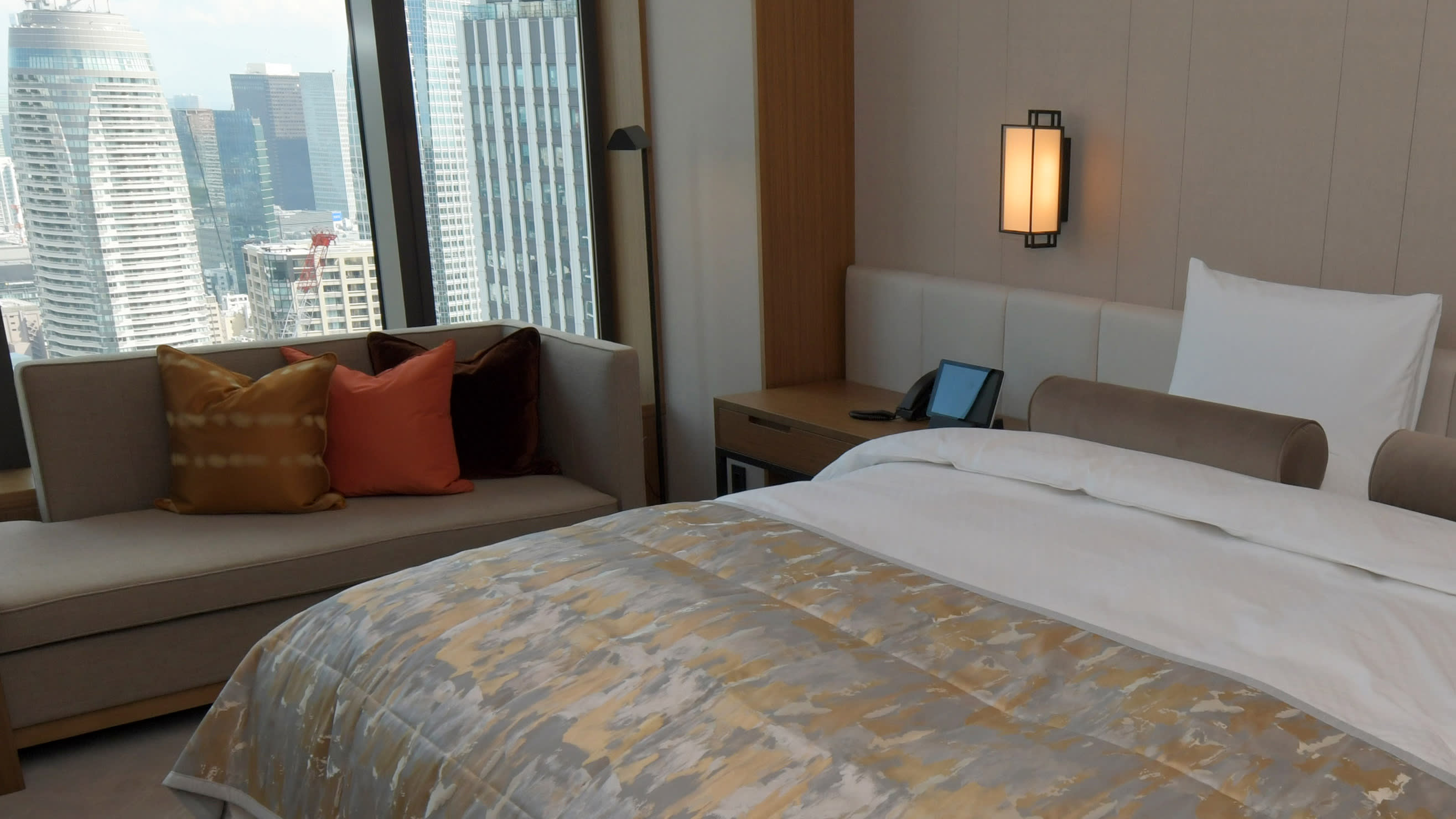 The Okura Tokyo reopened on Sept. 12 after a four-year renovation: The luxury hotel market in Japan is still underserved, industry analysts say. (Photo by Ken Kobayashi)

TOKYO -- The luxury hotel market is booming in Japan, fueled by an influx of foreign visitors, ahead of the Tokyo Olympics next year.

Experts say the luxury hotel market is still underdeveloped in Japan, compared with its Asian neighbors and the West, but there are signs of change. Well-heeled travelers in Japan have long attracted attention from overseas hotel operators. Now leading domestic companies are entering the fray.

The Okura Tokyo, considered by many to be one of the three top Japanese hotel brands, reopened Thursday after a four-year renovation that cost around 110 billion yen ($1 billion). The hotel has opened a new Heritage Wing, with rooms going for $650 a night, on average, more than three times the rate of the old hotel.

The Heritage Wing has 140 rooms of nearly 60 sq. meters each, staffed with butlers. And guests can check in and out of the hotel from their rooms. The Prestige Tower, on the other hand, has commercial office space, banquet rooms and a fitness center. The much-loved main lobby from the old Hotel Okura has been recreated. In all, the new Okura has 508 rooms. The company hopes to fill two-thirds of them with wealthy foreign guests, up from 60% at the old hotel.

The Okura, the Imperial Hotel Tokyo and the New Otani Tokyo were the three big players in Japan's upscale hotel market after World War II. Foreign hotel chains entered Japan in the 1990s, establishing themselves as the market leaders with opulent decors and extensive facilities.

According to the Tokyo Metropolitan Government, there are around 3,000 hotels in the capital. Forbes Travel Guide 2019 awarded five-star ratings to just five properties. Of these, only the Palace Hotel Tokyo, across from the Imperial Palace, is Japanese owned.

There are several reasons why Japanese hotel operators find it hard to compete in the luxury segment, according to Tomohiko Sawayanagi, head of the Japan hotels and hospitality group at JLL, a real estate services company. "Properties are still old, and this is a disadvantage compared with newly developed hotels," such as those operated by overseas brands, he said.

The predecessor of the updated Okura, for example, was built in 1962 and its rooms were only little over 30 sq. meters, making it difficult to price them at the international luxury standard. "The lack of customer loyalty programs also makes it hard [for Japanese operators] to keep wealthy international guests" within their networks, Sawayanagi said.

The typical luxury hotel guest has shifted in recent decades as well. China and India have many more wealthy travelers these days, but many Japanese hotel operators continue to offer services tailored to a domestic clientele, closing restaurants fairly early, for example.

"New hotels are beneficial in terms of facilities, as buildings become outmoded after some years," said Toshihiro Ogita, Hotel Okura's president. To compete with overseas operators, Ogita insisted on offering services based on Japanese concepts of hospitality. Many luxury hotels will open in Tokyo ahead of the 2020 Summer Olympics. A Four Seasons will open in the Marunouchi financial district, along with the first of Marriott International's luxury Edition properties in Japan, and a Kimpton, the boutique hotel brand operated by Intercontinental Hotels Group. Japanese partners will be involved with each.

These properties are eager to take advantage of Japan's tourism boom. A record 40 million visitors are expected to come in 2020, up from 31 million in 2018. The government hopes to raise that number to 60 million by 2030. Almost all of the increase is from tourists; the number of business travelers is flat.

The luxury hotel market in Japan as a whole is still underserved. According to another U.S.-based hotel rating site, the Five Star Alliance, Japan has just 32 five-star hotels, compared with 793 in the U.S. and 137 in China. Japan trails even much less developed countries, such as Thailand, with 112 five-star properties, and Indonesia, with 58. 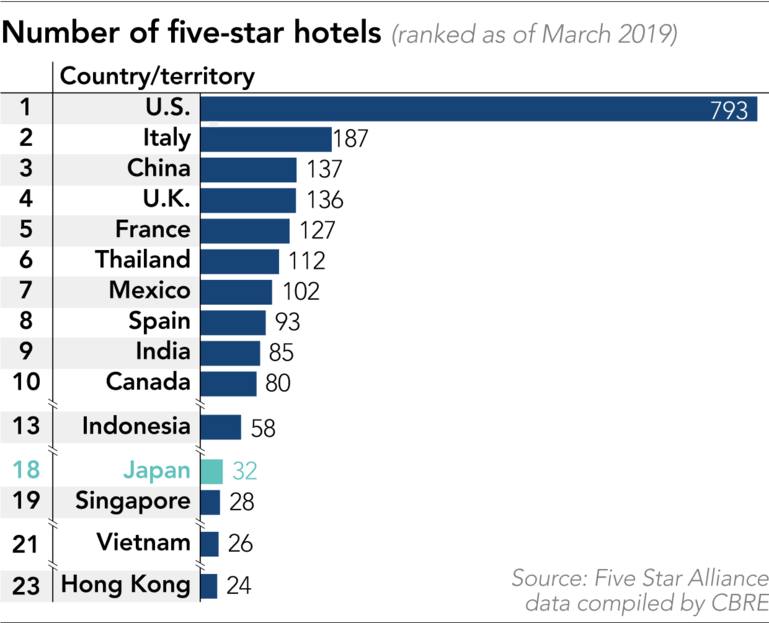 While many high-end accommodations are scheduled to open in Japan, 87% of the rooms added between 2019 and 2021 will be at limited-service hotels that offer few services beyond lodging, according to a report published in June by CBRE. The new properties will target mainly business travelers.

Full-service hotels will make up just 5% of the new supply, according to the report. "Japan still has few upper-class and higher-grade hotels, indicating significant scope for further development in these categories," CBRE said.

Analysts expect further growth in Japan's high-end hotel market. "While the pace of inbound tourist arrivals is slowing, the scheduled number of new, upper-class hotel rooms is quite limited, providing a stable market environment," said Sawayanagi, noting that new projects such as the Four Seasons and Edition have fewer than 200 rooms each.