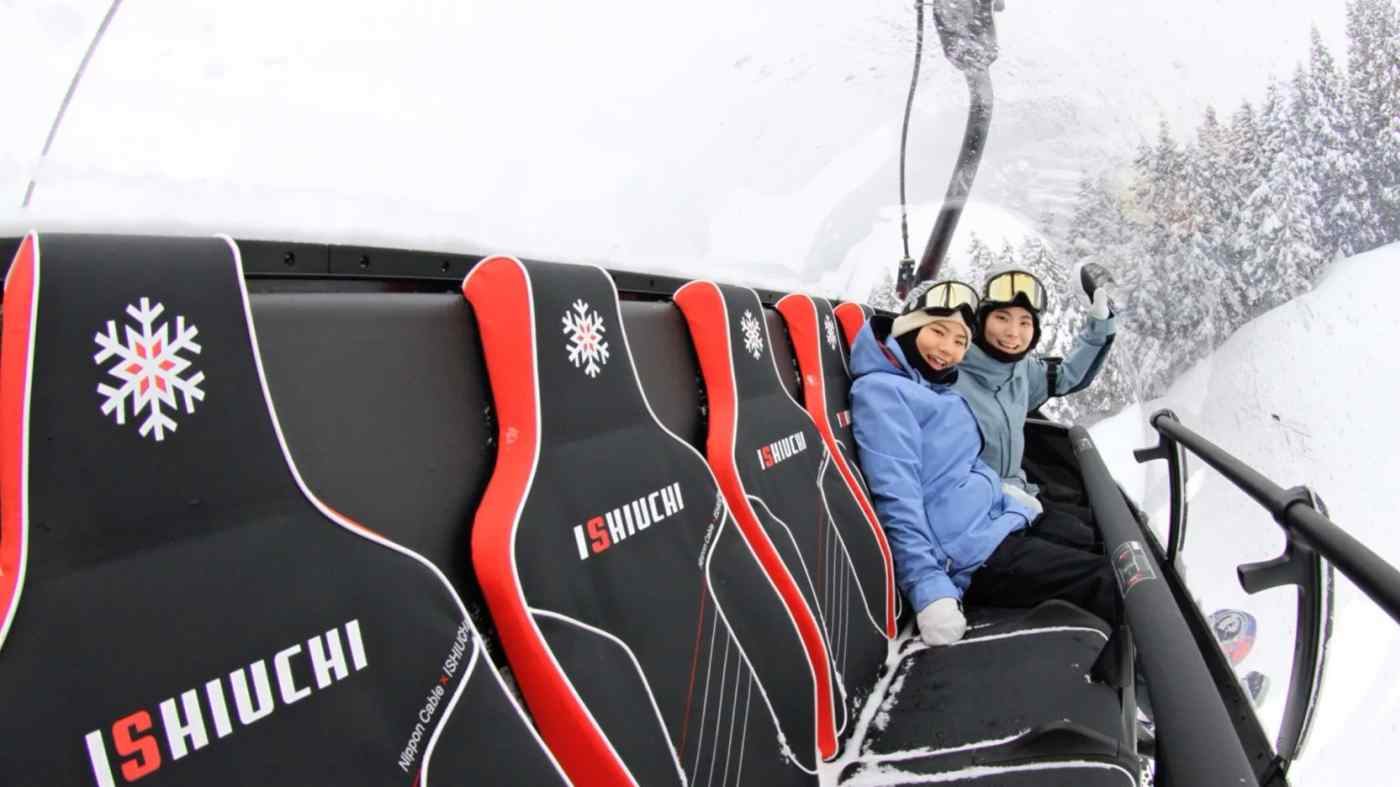 The number of visitors to the nation's ski resorts may have fallen 40% from its 1990s peak, but increasing numbers of overseas visitors are injecting new life into the industry by flocking to destinations such as Niseko in Hokkaido, northern Japan, for their powdery snow.

That snow has gained such a good reputation that "Japow," a slang word short for "Japan powder snow," has become widely used among ski and snowboard enthusiasts.

"The term Japow has received 280,000 hits on Instagram as people all over the world rave about Japan's powder snow," said Yoichi Goto, managing director of the Japanese unit of Switzerland-based Freeride World Tour.

However, many ski resorts have long neglected capital spending as visitor numbers continued to fall after the end of the bubble economy in the early 1990s.

"Facilities at Japanese ski resorts are outdated, trailing far behind those in Europe, the U.S. and China in terms of comfort and maintenance costs," said Naoki Shirakawa, president of Apresski, a Nagoya-based company that has operated ski resorts since the 1980s.

Now that big-spending foreign tourists are beginning to explore new skiing and snowboarding sites in Japan, local resorts are jockeying to install the latest facilities such as fast gondolas and smart ticket machines. 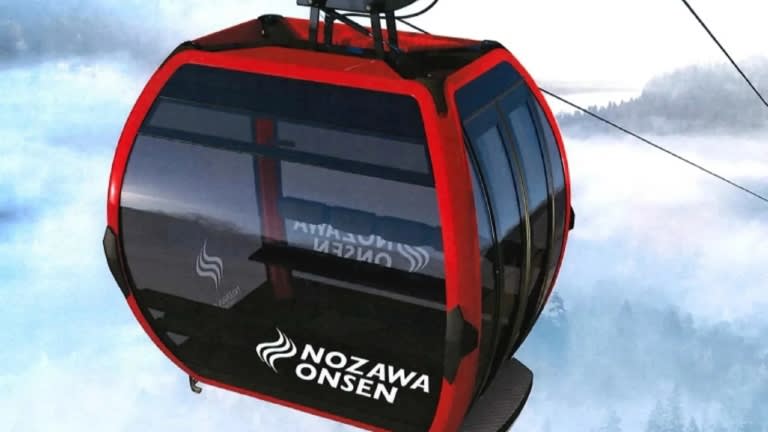 Nozawa Onsen Snow Resort in Nagano Prefecture, central Japan, is one such resort that is actively upgrading its facilities. The village-run resort will have 80 new gondolas in November 2020 which will almost halve the journey time to Yamabiko Station, located at an altitude of over 1,400 meters, from 15 minutes to eight minutes.

The new 10-person gondolas with big windows will sail above a 3,100-meter long slope with a height difference of 790 meters. The wind-resistant Austrian gondolas are much quieter and vibrate less than conventional models. Two out of the new gondolas also have glass floors so passengers can enjoy spectacular views.

It cost the village 3 billion yen ($27.5 million) to upgrade the gondola system, its biggest investment in nearly 30 years, with finance coming mainly from loans, including corporate bonds. The village has been considering upgrades over the past few years, but the aging facilities amid the rising number of foreign tourists pushed it to take the plunge and introduce state-of-the-art gondolas in an effort to pull in more skiers and snowboarders from overseas.

The resort is so popular among foreign tourists that the number of overall visitors has jumped 40% from a low of just over 300,000 to 420,000 last season. Land prices are also rising, lifted by an increasing number of hotels and restaurants.

"We cannot attract foreign skiers with outdated facilities. [With the new facility] I'm sure we will be able to achieve a return that matches investment," said Toshio Tomii, mayor of Nozawa. 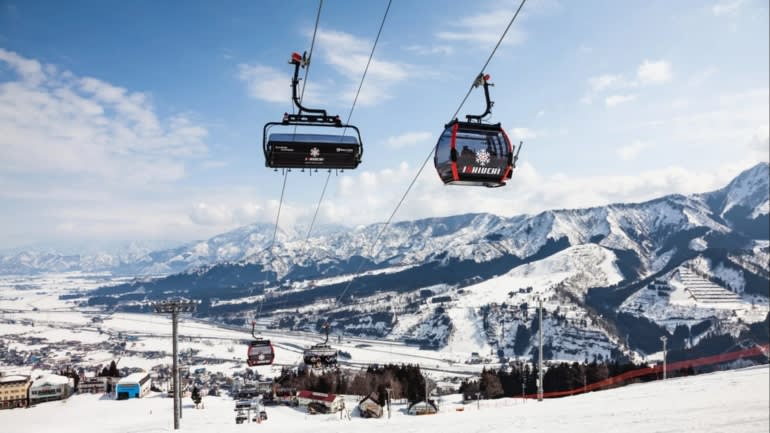 This combination lift at Ishiuchi Maruyama Ski Resort has a lift and a gondola running on the same wire.

Ishiuchi Maruyama Ski Resort in Minami-Uonuma, Niigata Prefecture, was among the first Japanese ski resorts to upgrade its facilities. The 70-year-old resort in December last year started operating the Sunrise Express, which combines a 10-person gondola and a six-person lift on the same wire, and it can also be used by regular tourists who do not ski or snowboard.

The lifts have heated seats, and the gondolas boast leather cabins. The spacious facilities have a quality almost comparable to Toyota's Lexus luxury car, according to a spokesperson for the ski resort. The upgrade, including a resort center, was carried out at a cost of 3.8 billion yen.

In Hokkaido, foreign companies are actively investing in ski resorts. Thai developer Property Perfect this winter started operating combination lifts similar to the ones at Ishiuchi Maruyama at its Kiroro Resort in the village of Akaigawa.

Nihon Harmony Resort, a unit of Hong Kong-based developer Pacific Century Premium Developments, plans to invest 3 billion yen in its Niseko Hanazono Resort next season. The four-person lifts will be replaced with new ones to carry six people, and will be equipped with free Wi-Fi and heated seats. Ten-seater gondolas will also be added to ease congestion on the slope for beginners. Condominiums under construction at the Niseko Hanazono Resort in Hokkaido, northern Japan

Ski resorts in the Hokuriku region on the northwestern coast of Japan's main island are upgrading their facilities, too. Ski Jam Katsuyama in Fukui Prefecture will start operating three automatic ticket machines this season. Customers can print their pre-purchased lift tickets online by scanning a QR code with their smartphones. Financial institutions are skeptical as well. "It is unclear whether the number of visitors will increase," said an executive of a regional bank.

Masao Taguchi, representative of a Saitama-based ski resort consultancy, said that visitors to four ski resorts, including Niseko, jumped by 300,000 in five years -- equivalent to that of a large ski resort -- and it was investments and marketing that created the extra demand.

The Gransnow Okuibuki ski resort in Maibara, Shiga Prefecture, spent 650 million yen building a new complex called center house in 2014. The resort spent another 550 million yen to introduce Japan's fastest lifts in 2018, resulting in even more visitors than during the bubble period.

The ski resort is operated by a local company without backing from major companies or foreign capital, but "continued investments have started to bear fruit," said a representative of the operator.