KYOTO -- Japan's Imperial Hotel plans to open luxury accommodations in Kyoto's Gion district, banking on the geisha neighborhood's old feel amid concerns the area's character is being lost as tourists flock to it.

The project marks the Tokyo-based company's first new hotel in Japan since 1996 and provides a long-sought foothold in the old capital.

Imperial Hotel signed an agreement on Wednesday with the owner of Yasaka Hall and will renovate the eight-decade-old theater. The site will open in a few years and have no more than 100 rooms, according to the hotel operator.

A wave of hotel openings is about to hit the city, including the Park Hyatt Kyoto and the Aman Kyoto this autumn.

"Kyoto is without a doubt one of the cities that represents Japan," Imperial Hotel President Hideya Sadayasu told reporters here Wednesday. "Gion is a special place within Kyoto where tradition and the culture of omotenashi ['welcoming'] have been distilled." 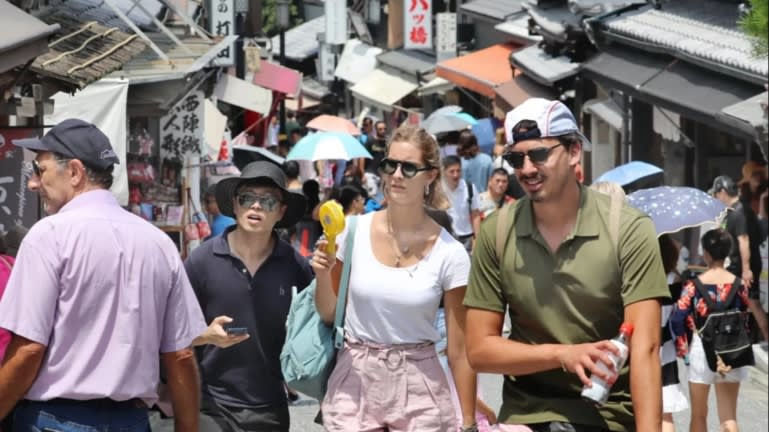 An Italian couple walks a street thronged with tourists in Kyoto, part of the "Golden Route" of travel destinations in Japan. (Photo by Kento Awashima)

Built in 1936 in a blend of Western and Japanese architectural styles, Yasaka Hall sits on Hanamikoji Street, a road lined with tea houses and theaters. It has been closed since 2016 for earthquake safety improvements.

The neighborhood is designated for historical preservation, and a local council set voluntary guidelines meant to maintain the area's look.

But an influx of selfie-seeking international tourists in recent years has prompted complaints from business owners about narrow roads being clogged and curious visitors peering into establishments that pride themselves on discretion. 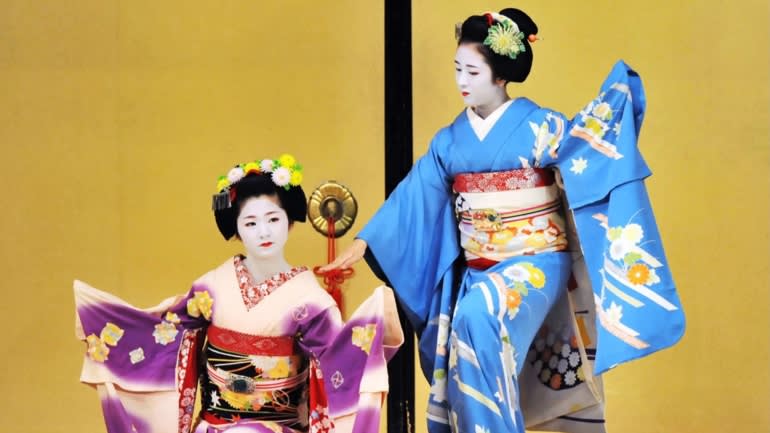 "Maiko" entertainers perform on a stage in Kyoto.

Locals are working to address these complaints through measures such as sending text alerts to visitors' smartphones, reminding them of the neighborhood's manners.

Sadayasu expressed hope that the new hotel "will change the flow of people" on Hanamikoji Street.

Imperial Hotel "has always tried to create high-quality hotels by not opening many locations," he also said.