The 200 suites in The 13 Hotel, originally billed to be the world's most luxurious, cost an average of $7 million each to construct.    © Getty Images
ZACH COLEMAN, Nikkei Asia deputy editorDecember 4, 2020 12:50 JST | Macao
CopyCopied

The flamboyant former investment banker persuaded a Canadian teachers' pension fund and other investors to back a bold $1.4 billion vision for Macao: the world's most luxurious hotel.

Hung pitched the Louis XIII as a vision of ostentatious French royal splendor where free-spending Chinese tycoons would wager and spend millions without a care, just down the road from Macao's sprawling gaming resorts.

But on Friday, remaining investors will gather in Hong Kong to debate rival exit plans from what has turned into a spectacularly bad bet. The hotel, now just known as The 13, opened two years late and without a casino.

It has never come close to making money and has not even been open since Feb. 15. Shares in parent company South Shore Holdings, which hit HK$47.27 in early 2013 after Hung's plan was unveiled, closed Thursday at 7.1 Hong Kong cents. 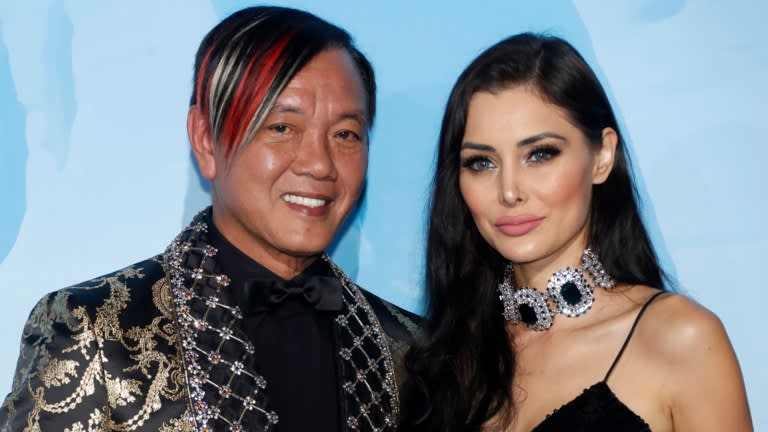 Stephen Hung and his wife Deborah Valdez-Hung, a former model from Mexico, at a 2019 event in Monaco.    © Reuters

Yet the cards are starting to fall into place for real casino operators in Macao. After three quarters of racking up losses -- with barely a guest in sight but local payrolls kept full under government pressure -- five of the city's six gambling operators began making money at a gross level in recent weeks. Shares of all six have rebounded from spring lows, with some now trading above where they started the year.

Matt Maddox, chief executive of Wynn Resorts, told analysts last month that his Macao business went from posting a loss of $40 million before interest, taxes, depreciation and amortization in August to a $6 million gain on the same terms in October.

"Quite a big swing," he said. "Those trends that we saw in early October are continuing into November. We feel really good about the current trajectory that's going on there."

Macao has not reported even an imported case of COVID-19 since July. But what has made all the difference for Wynn and other casinos is China's move to let mainlanders make leisure trips to the city once again.

On Nov. 20, the first day of the annual Macao Grand Prix races, the city received about 28,000 visitors, its highest daily tally in nine months. For November as a whole, the city's casinos took in 6.75 billion patacas ($845 million) in gross revenue. That represented a 70.5% drop from a year earlier but the smallest such decline since January.

The procedural hurdles for mainland Chinese to visit Macao are much higher than before the pandemic, requiring up to two weeks and a visit to the local police department as well as COVID-19 tests. The controls are tightest for residents of Guangdong Province, which abuts Macao and is usually its best source of visitors. A preview event for the 2020 Macao Grand Prix helped build momentum for the city's biggest influx of visitors in nine months.   © AP

Analysts and casino executives expect China will lower these hurdles gradually, helping move the operators further into the black.

"There's real pent-up consumer demand, and it's just going to take time for the market to continue to open," Maddox said.

A major step will be Macao's reopening to visitors from Hong Kong, which is traditionally the casinos' second-biggest market and whose airport is a key access point for Chinese going to the gaming hub. Goldman Sachs analyst Simon Cheung estimates this border closure is keeping away one-third of the casinos' normal traffic.

With mainland Chinese essentially unable to go farther overseas with COVID-19 cases rising again in Hong Kong and many countries, Macao is almost their only option. Its position has been reinforced by Beijing's talk of blacklisting foreign destinations judged to be improperly promoting gambling to its citizens.

"One of the reasons our retail business from the high end is booming, according to our people on the ground, is that they [Chinese] can't fly to France or the U.S. or wherever they travel to and buy their luxury goods, so they're buying it at home," said Robert Goldstein, Las Vegas Sands' president and chief operating officer, on the company's third-quarter results call.

Such developments come too late for The 13 and South Shore, which last week announced an unaudited net loss of HK$473.73 million ($61.1 million) for the six months to Sept. 30.

The Ontario Teachers' Pension Plan Board pulled out three years ago amid continuing construction delays. Hung abandoned his positions and shares in the company at the start of 2018, seven months before The 13 finally opened. He could not be reached for comment.

Princess Tania de Bourbon Parme, a descendant of King Louis XIII, quietly abandoned her role as special adviser. A promised branch of top-rated Paris restaurant L'Ambroisie and an invitation-only Graff Diamonds salon that was to sell jewelry at starting prices of $1 million never appeared. Most critically, none of Macao's licensed casino operators ever agreed to extend their services to The 13.

The project's timing was off from the start, kicking off in 2013 as Xi Jinping took office as China's president and launched an anti-corruption campaign that scared some high rollers from visiting. Slowing economic momentum and swings in China's stock and property markets further dulled the appetite for the "ultra luxury" travel that Hung counted on as he set room rates of up to $130,000 a night.

During its first half-year of operation, the 200-suite hotel drew HK$3 million in room revenue and HK$2 million in restaurant and bar receipts, filling 8% of its available rooms at an average rate of HK$5,000 even as many Macao hotels were full for nights on end.

The hotel took in HK$28.95 million for the year ended March 31. The improvement, due to a higher occupancy rate of 37.3%, could be traced to a decision to accept lower average room rates of HK$1,829.

South Shore's auditors have questioned the parent's ability to keep going for some time. The company also has failed to repay a loan that matured in August after earlier breaking borrowing conditions related to the opening of the hotel and maintenance of financial performance ratios.

Management has asked shareholders to reject Evolution's proposal at the company meeting called for Friday. Executives already have been seeking new financing and buyers for the hotel -- a tentative deal fell apart Sept. 1 -- as well as for Paul Y. Engineering, the original core business of South Shore and the source of nearly all its current revenue.

It is unclear how many of Evolution's bonds have been converted into stock. If they all were, Evolution would be the company's biggest shareholder, with a 26.2% stake. Hong Kong Stock Exchange filings also say Evolution has an 8% short interest, which increases in value if the company's stock falls. Evolution did not respond to a request for comment.

South Shore put Evolution's equity holding at 10% in a recent exchange filing, saying that winding up the company "would not be in the best interests of all shareholders" and noting that bondholders will get priority ahead of stockholders on the company's assets in a liquidation. It said holders of at least 25% of its shares oppose Evolution's motion.