TOKYO — Indian startup Oyo Hotels and Homes is aiming its digital disruption at old-style Japanese hospitality -- signing up 1,000 ryokans, or traditional Japanese inns, to its online platform as the hotel operator recalibrates its growth plans.

The ryokan is one of Japan's most traditional experiences, where domestic and foreign tourists can enjoy tatami mats, futon beds and carefully presented meals. A string of tie-ups with these timeless and often expensive establishments might seem unusual for SoftBank Group-backed Oyo, which is known for its aggressive growth plans in budget hotels.

But in an interview, Oyo Hotels Japan Operating Partner Prasun Choudhary said ryokans were a good fit for the business and part of a "genuine effort to build a long-term brand" and find out "how to grow overall hospitality in Japan."

"We will invest a lot in marketing ... and technology," Choudhary told the Nikkei Asian Review. "And in the process, high growth. This is how I will take this year."

Oyo says it can bring growth to ryokans by helping owners shake off some of their stuffier traditions.

Oyo launched in Japan almost a year ago, when its ambitious goal was to have 75,000 rooms nationwide by now, according to sources. So far it has signed up only 4,000, excluding the ryokan partnerships. Oyo does not own the units but offers owners its brand, technology and furnishings. Oyo claims its AI-based management system automatically sets room prices based on occupancy. 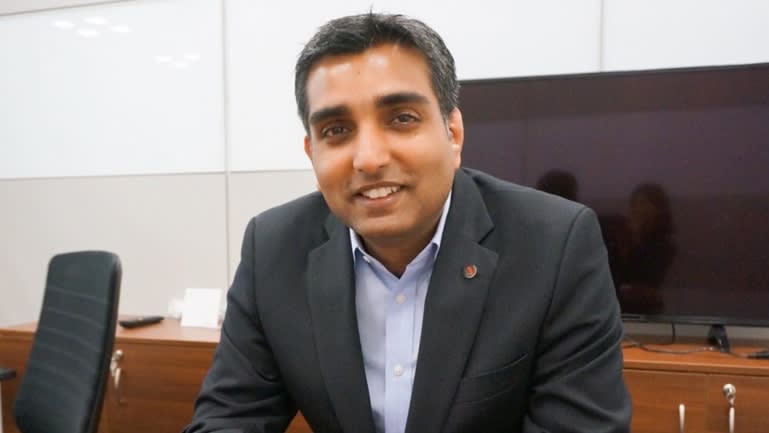 Prasun Choudhary, operating partner at Oyo Hotels Japan, said ryokans were a good fit for the business and part of a “genuine effort to build a long term brand.” (Photo by Eri Sugiura)

The accommodation group is also changing tack in light of problems at other SoftBank-backed companies such as WeWork, the co-working office group, which delayed its initial public offering last year after investors balked at its enormous losses and troublesome governance.

Oyo founder Ritesh Agarwal has shifted the focus from growth to profitability, laying off roughly 2,000 workers in India, as part of a process to reduce the global workforce from around 30,000 to 25,000, he told Nikkei in early February.

In Japan, Oyo's hotel business has stopped offering revenue guarantees, which were initially aimed at persuading hotel owners to sign on to its platform but which pushed up costs for Oyo. Meanwhile, Oyo's short-term residential unit in Japan is sending staff to other SoftBank-backed startups.

An internal person familiar with Oyo’s Japan business says the company has pulled back the initial 75,000-room target, looking instead to be more profitable.

Oyo believes ryokans could now be a sustainable platform for expansion. There are 38,000 of the inns in Japan, often in places such as hot spring resorts, but many are mom-and-pop businesses without a clear succession plan or strategy for attracting foreign guests. The number has dropped by a quarter over the last decade, but is still four times the number of hotels.

And while Japan has seen a travel boom ahead of the Tokyo Olympics -- the country received 31 million visitors in 2019, more than double the number in 2014 -- the ryokan sector has not capitalized as much as other segments. While business hotels and city hotels enjoyed an occupancy rate of over 70% in 2019, the rate at ryokans was below 40%, according to the Japan Tourism Agency.

Oyo wants to position itself as a dominant player in the ryokan sector, providing brand and operational know-how to ryokan owners, including a unified brand logo featuring a Japanese futon and bath seat.

It also wants to make some changes. "A little customization of products can serve foreign tourists and even Japanese millennials," Choudhary said.

One example would be to allow guests a choice of the number of meals served per day, rather than the three meals at fixed times that ryokans usually serve.

This project is a new challenge for ryokan operators as well. "We are expecting a lot from Oyo's pricing technology, as it takes a lot of work if we try to adjust pricing manually looking at demand," said Kuniharu Omae, manager of Hotel Umi Hikari in Mie Prefecture, which joined Oyo Ryokan. "It is the first trial for us and we were anxious, but it is better to work on automation earlier than others," he said.

He also believes Oyo's guest network in India, China and the West can help bring customers from around the world.

Choudhary accepted that the coronavirus outbreak would "eat up the first half of 2020" for the company but said Oyo was now focused on a more measured pace of expansion. "We make sure to have growth at calibrated measures so that you are good to go for the next few years," he said.

The outbreak hangs over Oyo and the rest of Japan's hospitality sector. The hardship it has already meant for the sector would worsen dramatically if the Olympics is canceled or postponed.