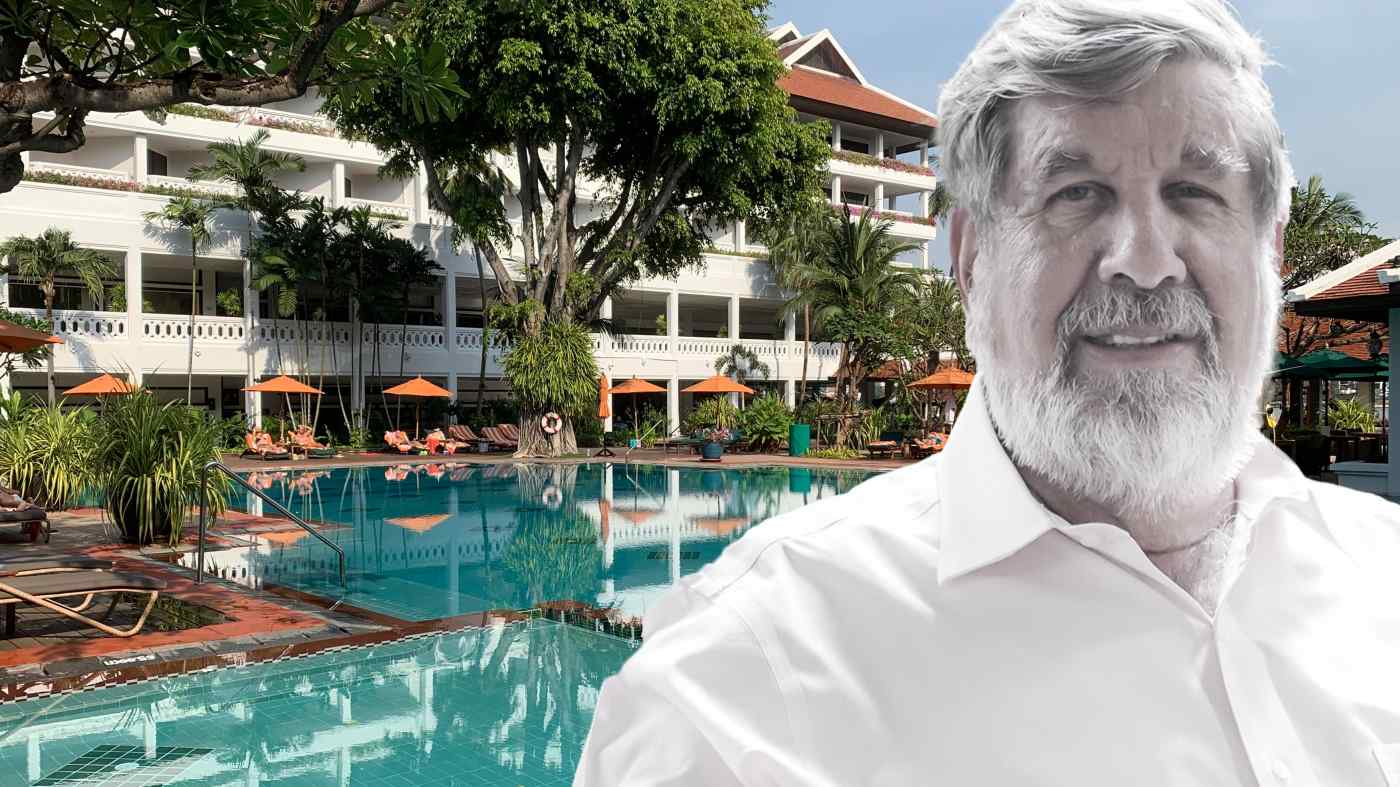 BANGKOK -- Thai hotel giant Minor International intends to open and operate 100 hotels in China amid efforts to diversify growth by shifting from investing, owning, and operating hotels to taking on contracted operation.

"We have a very new joint venture in China with Funyard Hotels & Resorts, which will hopefully lead us to about 100 hotels over the next five years in China," Minor Chairman William Heinecke told Nikkei Asia in an exclusive interview.

The group entered a strategic partnership with Funyard in January 2021 to bring its forte in luxury travel to China.

Minor operates roughly 530 hotels -- or 76,000 rooms -- in 56 countries and territories. It runs its signature five-star luxury hotels under the Anantara brand in Thailand's major cities, as well as resort destinations in other parts of Asia. Hotels under management tripled when Minor acquired Spain's NH Hotels for 2.3 billion euros ($2.6 billion) in 2018.

The company is scheduled to add about 13,000 rooms between 2021 and 2025. The partnership with Funyard is part of Minor's plan to become a contract operator of 80% of those rooms. "We will continue to look for expansion opportunity via an asset-light business model," the chairman said.

Contract operators take commissions from real estate owners such as investment funds, the amount of which depends on the performance of hotels under management. Analysts say this asset-light approach lessens risks from large capital expenditures required to maintain real estate and infrastructure. Contract operators can stabilize performance and finances during tough times like the COVID-19 pandemic, though they may gain less in good times compared to companies that own and operate hotels. 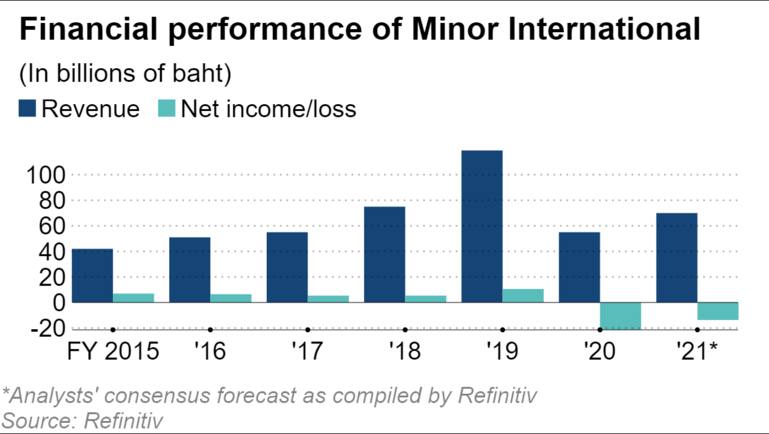 "We've faced many crises during the last 50 years and this one certainly is one of the most severe crises that we've had," Heinecke said of the pandemic.

As of now, Minor owns or rents roughly 70% of hotels under management, weighing on its performance and finance. The group reported a net loss of 21.4 billion baht in 2020. During the first nine months of 2021 net loss stood at 11.6 billion baht.

Minor's finances have taken a hit since the pandemic struck. The group's long-term debt-to-equity ratio rose to 1.7 in 2020 -- up from a recent low at 0.89 in 2017 and 1.19 in 2019. It is still better than many local and global rivals but has prompted Heinecke to clean up the company's balance sheet.

"We are slowing down on big investment projects to reserve cash and reduce capital expenditure," the 72-year-old chairman said. "We are committed to good financial obligations to ensure a strong balance sheet and liquidity," he added. In December, Minor divested its shares in two subsidiaries to an investment fund for $104.8 million. 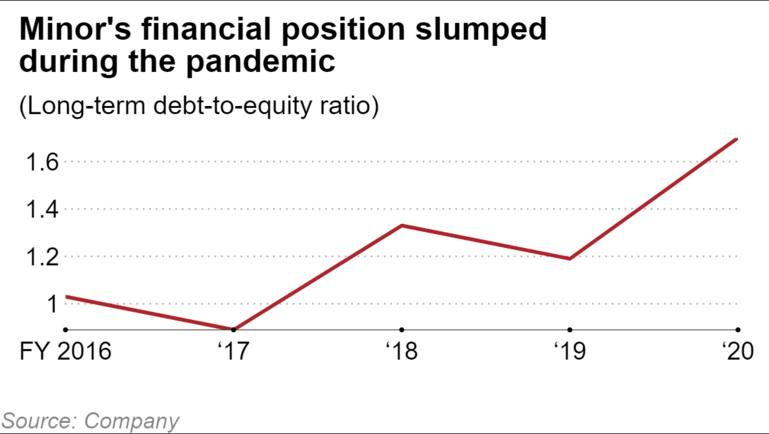 Heinecke settled in Thailand in 1963 after kicking around Asia with his father, who joined the U.S. military and foreign service. "I was very lucky early on that I happened to move to Thailand when I was a teenager. I felt that this is where I wanted to live," he said.

Born in the U.S. state of Virginia, the hotelier established his first business selling advertising and cleaning services when just 17 years old, hence the company name Minor. He got his start in the hospitality industry in 1978 with an investment in a hotel in Pattaya, a beach resort on the east coast of the Gulf of Thailand. "We may not be the best at making chips or electronics or other things, but we are one of the world's best tourism providers," he explained about his decision to go into the hotel business in Thailand.

"I've always seen the world as more of a single market rather than many different markets. What really differentiates them is just disposable income," Heinecke said. "We've risen with Thailand's growth over the last 40 to 50 years."

Heinecke renounced U.S. citizenship and became a naturalized Thai citizen in 1991. His unique background, continued success, and contributions to the Thai economy have boosted his political capital. Since the initial outbreak of COVID-19, Heinecke has been quite vocal on how the country should balance the economy with measures to control the pandemic.

While praising the Thai government's robust vaccination efforts, Heinecke strongly opposed its decision to suspend the quarantine-free entry program for vaccinated travelers from late December due to omicron. The lobby of the Siam Anantara hotel in Bangkok, owned and operated by Minor.   © EPA/Jiji

"Our whole lobbying effort is to focus the government on reopening the country as quickly as possible and to accept that omicron will become the dominant variant with a very mild case," Heinecke said. "Whether Thailand sees a V-shaped or U-shaped recovery of tourism depends on how the government responds."

Thailand reported 7,587 new cases on Jan 26. The country has confirmed seven omicron-related deaths so far. On Jan 20, the government decided to resume the program from February.

"This resumption of the program comes at the right time, as we are still in the middle of high season in Thailand," said Heinecke. "Along with the tourism business community, [we] are ready to welcome tourists and are looking forward to the restart of the program."

Thailand's weather turns less hot and humid from November to February. The dry season, which coincides with Christmas and New Year holidays in the West and the Lunar New Year in parts of Asia, is widely seen by tourists as the best season to visit the kingdom.

The resumption of the program should contribute to Minor's performance. "We are optimistic to be able to be profitable for the year 2022," the chairman said. "We are fortunate that we are both involved in food as well as hospitality." Many Thais have adopted the new normal, and Minor's booming food delivery service has been supporting group performance.

Moreover, the company looks to focus on tapping the high-end market, as international travel may become limited to the more affluent until the pandemic ends.

"Travelers today tend to be more upmarket," Heinecke said. "We have also increased our focus on higher-end travelers and premium pricing, as mass tourism is not going to be returning as quickly, especially because China is still closed. And nobody knows how long China will remain closed."

The target audience's preference for "experience" consumption may favor Minor. The company's luxury services include wellness operations such as Thai spas -- a difference that could distinguish Minor from Western rivals.

On dealing with possible outbreaks of new variants in the future, Heinecke stressed that strict policies or further lockdowns are not the answer. "Lockdowns or any forms of border restrictions will only harm livelihoods and prolong economic disruption," he said."We should work together to find creative ways to bring back international tourists to Thailand, while at the same time learning to live with this virus safely."