TOKYO -- Tokyo Disney Resort reopened on Wednesday after a four-month suspension due to the coronavirus, but the number of attractions was limited, and visitors were kept at less than 20% of pre-pandemic levels.

The resort and other theme parks in Japan must balance the need to attract visitors with a duty to help prevent the virus's spread. They are also under pressure to review their business models, including by stepping up their online presence.

"I felt like I finally came back home," Kaho Tamura, a 25-year-old Disney superfan since her childhood, told the Nikkei Asian Review after her visit on Wednesday. "I also felt very safe as measures to prevent the infection were more thorough than I had imagined."

Tamura said that when she began her day and found herself standing in lines that wrapped around enclosures, she figured it was a particularly busy day with long lines. But she soon realized Disney had moved the lines outdoors as a preventive measure.

She was also pleased when a staff member offered to take a picture of Tamura and her friends but paused to apply some hand sanitizer before accepting her camera.

"I was moved by the operator's effort to balance prevention measures with hospitality," Tamura said.

Tokyo Disneyland and DisneySea have been closed since the end of February due to the pandemic. Since May, Oriental Land, operator of the resort, was making behind-the-scenes preparations for the reopening on July 1. In June it began discussions with parent Walt Disney in the U.S. and with its full-time and part-time employees about how exactly the resort would run upon reopening.

Theme parks in Japan need to make clear what visitor numbers are appropriate in order to prevent the spread of the coronavirus. Universal Studios Japan in Osaka Prefecture, which reopened on June 8 to residents of Osaka Prefecture only, starting July 20, will admit guests from all of Japan, even those without annual admission passes.

Toshimaen and other theme parks in Tokyo have also resumed operations.

Oriental Land's decision to reopen came much later than those of rival parks because the company had decided that it would need to wait until restrictions on traveling across prefectural borders were lifted.

"As long as it is named 'Tokyo Disney Resort,' limiting visitors to residents of Chiba Prefecture is unrealistic," an Oriental Land spokesperson said. The resort is actually located outside of Tokyo, in neighboring Chiba Prefecture. The company did not begin final preparations, including infection prevention measures, until June 19, when the restrictions on travel across prefectures were lifted.

For the time being, only about 15,000 visitors will be let into the resort each day, and they will have to make reservations. Before COVID-19, the facilities attracted nearly 100,000 people on a busy day. Discounted tickets with specified entry times will also be on sale.

Analysts believe the restricted admissions policy will financially damage the operator. "No profit will be generated with only 15,000 daily guests," said Tomoaki Kawasaki, a senior analyst at IwaiCosmo Securities.

Oriental Land on Monday unveiled how it intended to prevent the novel coronavirus from spreading at its parks, with the "three C's" -- closed spaces, crowded places and close-contact settings -- being strictly avoided at Tokyo Disney Resort.

Among the measures are clear ground markings to help people to socially distance. In front of the entry gates of Tokyo Disneyland and Tokyo DisneySea the area is marked with waiting positions so visitors can keep a safe space between one another. Staffers have also been holding up signboards and reminding visitors to line up in a distanced manner. Temperatures are being taken as well, with anyone with a temperature of 37.5 C or higher at the entrance denied admission.

Visitors will also be encouraged to buy souvenirs via a dedicated app rather than in shops. 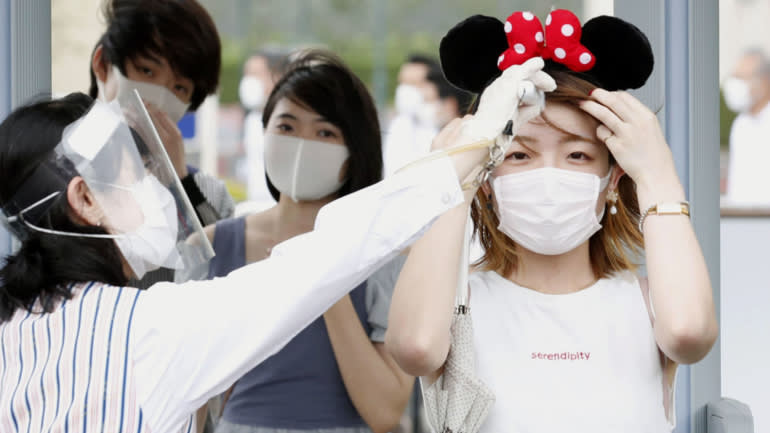 A woman has her temperature checked at the entrance of Tokyo Disney Resort on July 1.    © Kyodo

In the resort's restaurants, the number of tables has been reduced. Menus will have QR codes on them to enable customers to confirm details on their smartphones in an effort to prevent menus from being touched too often by unspecified numbers of people.

On rides, visitors are being asked to sit in every other seat and to make use of the hand sanitizer provided at entrances. Also, theater-type attractions will keep doors open for longer to provide sufficient ventilation.

Park-goers must make reservations online, a process that Tamura said made "it really hard to get our tickets." The Disney fan said it took three hours of refreshing the website before she and her friends could purchase their tickets.

Tokyo Disney Resort has also been forced to review some processes that are vital to setting its magical atmosphere. This has affected Mickey Mouse and other characters who roam the resort. Visitors could previously exchange high-fives with the likes of Goofy, but greetings now come in the form of waving from a safe distance.

Character greetings are popular at the resort, but "if we do it, we have to do it in a manner in which we can prevent contact," an Oriental Land executive said. In places where parades were held before the outbreak, Disney characters will ride on vehicles as they greet visitors, who will be asked to watch from spots marked on the ground at least 1 meter apart. No more squeezing together. Tokyo Disney visitors are being asked to leave every other seat vacant when they go on rides.   © Kyodo

"It is kind of sad that I cannot have contact with Donald Duck and other characters, but I cannot wait to feel the atmosphere of the park," one Disney fan said. "I will take a day off and go to the park."

Meanwhile, some devoted fans have expressed their frustration as they have not been able to get in with their annual passports.

For other theme parks with less high-profile and fewer offerings than Tokyo Disney Resort, balancing precautions and attractiveness is even more difficult. Sanrio Puroland, which will reopen on July 20, will continue to allow greetings with Hello Kitty and other characters in a way that allows visitors to take photos while maintaining a distance.

"With only a few attractions, we have no option but to continue character greetings," said a spokesperson of Sanrio Entertainment, which runs Sanrio Puroland.

The Fujikyu Highland amusement park in Yamanashi Prefecture, which reopened in May, is asking visitors not to yell or scream on roller coasters and other rides. On June 17, the park drew attention when it posted footage on Twitter of CEO Daisuke Iwata and Fuji Kyuko President Koichiro Horiuchi quietly riding a roller coaster while wearing face masks.

Some theme parks are turning to the internet to secure new revenue streams. While the parks were closed, Oriental Land was selling goods online that were previously only available at Tokyo Disney Resort. Sanrio Entertainment is looking to stream live performances of its characters and providing character greetings online.

"Online marketing is in a trial phase this fiscal year, but will be included in our sales budget next fiscal year," said Sanrio Entertainment President Aya Komaki.

Building a business model that better deals with the rapid decline in the number of visitors will determine the competitiveness of theme parks going forward.