HANOI -- Enthusiasm about travel is rapidly picking up among Vietnamese as the government eases its "zero COVID-19" policy.

The number of domestic tourists totaled 9.6 million in February, up about 4.8 times from a year earlier, and 6 million of them made multiday trips, according to government data. The number also increased on a year-to-year basis in March.

Vietnam introduced tougher restrictions to combat the novel coronavirus than its neighbors but has lifted most of them. The populace, which had no choice but to stay home for two years, is eager for domestic travel.

The long white-sand beaches of Phu Quoc Island in the province of Kien Giang were crowded with families from various parts of the country even on weekdays in late March.

"Our flight was full. I didn't expect so many people to be here," said a company employee from Hanoi named Hung. Canceling two travel plans because of the pandemic, Hung had been seeking an opportunity for "another try," he said.

Vietnam reopened for international tourism on March 15. Visitors from countries such as Japan and South Korea are allowed to enter without visas and do not need to quarantine if they show certificates for negative results from PCR or other tests conducted within 72 hours before departure for the Southeast Asian country.

But the daily number of people newly infected with the coronavirus is staying at around 50,000, the highest in Southeast Asia, according to data released by the government.

The actual number of infections is reportedly larger, acting as a drag on the growth of tourists from abroad. Furthermore, concerns are increasing due to the global spread of the new omicron XE variant, considered more virulent than other strains.

Neighboring countries such as Thailand and Malaysia are also starting to lift quarantine requirements for vaccinated tourists from abroad. But the number of inbound tourists is still far below what it was before the pandemic. In Thailand, the tourism industry remains greatly reliant on domestic tourists, even during the holiday season that features the famous Songkran water festival.

Vietnamese are awaiting the four-day holiday, planning trips to popular beaches and other destinations across the country over the next two weeks.

"Full-booking is reported at all our resorts and hotels at tourist destinations for the period of April 30 to May 3," said a representative of Vinpearl, a tourism arm of Vingroup, the country's biggest private conglomerate. Vinpearl operates the largest network of city hotels and resorts across Vietnam, with 45 locations comprising about 18,500 rooms. 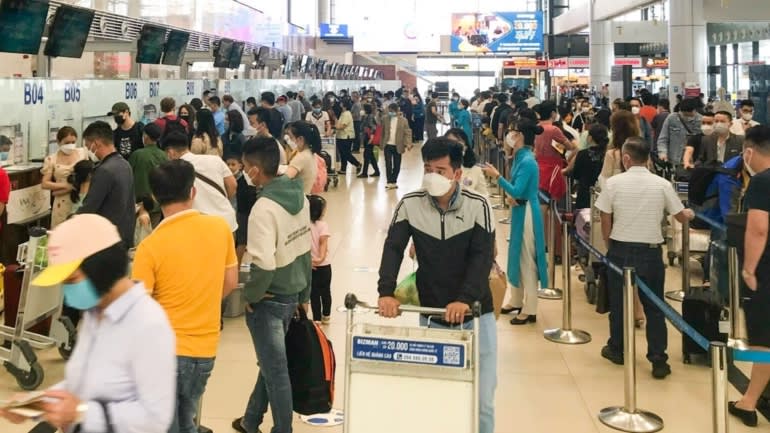 Vietnamese, who had no choice but to stay home for two years, are now eager for domestic travel. (Photo by Tomoya Onishi)

A manager of a local hotel chain, which was specially designed to welcome tourists from eastern Europe, told Nikkei Asia that they received bookings from domestic travelers right after cancellations of several groups from Russia and Ukraine after the war broke out in February. Accommodations are now fully booked by domestic family groups during the coming holiday.

Nguyen Binh, manager of a real estate company in Hanoi who used to enjoy going abroad, decided to travel within the country with her family. "If the pandemic surges again, it is easier to fly home from a Vietnamese city rather than Dubai or Bangkok," she said, adding that she is afraid of being stranded overseas and does not plan to travel outside Vietnam before the year-end.

She said her family traveled to the rural town of Sapa in northern Vietnam near the Chinese border in March after all domestic restrictions were lifted. The family wanted to get away from the city after new COVID cases surged at the beginning of the year, which led to lockdowns in the capital.

Ho Chi Minh City, Da Nang, Hue, Hoi An, Nha Trang, Can Tho and other cities are offering new tourism products. Ho Chi Minh City, for example, plans to operate helicopter tours around the city and nearby regions.

The government lifted all hygiene requirements for domestic travel except for masks and other self-protection measures in crowded locations.

Thien Minh Group, a leading tourism company in Vietnam, will focus on services to lure domestic tourists because demand from inbound tourists -- especially those from China, South Korea and Japan -- is unlikely to fully rebound until after this summer, said Chairman and CEO Tran Trong Kien.

Rates charged by five-star hotels in major resort areas have dropped roughly by half since the pandemic started, according to hotel industry officials. In Nha Trang in central Vietnam and Phu Quoc in the south, lodging for little more than $80 per room is possible at such hotels.

Although rates will rise during four consecutive holidays from the end of April, rooms are almost fully booked.

Many three- and four-star hotels have lowered rates and introduced campaigns to attract domestic tourists, such as free breakfast for children in elementary school or younger and extra beds. Tourists will be able to stay more cheaply at hotels than during pre-pandemic levels "for the time being," an industry official said.

Vietnam introduced strict coronavirus regulations early on. Similar to China, which is also under one-party communist rule, Vietnam adopted a zero COVID-19 policy to prevent any infections through broad restrictions on travel. Even when the number of infections was small, citizens were afraid of the coronavirus and strictly followed stay-at-home orders.

The government changed its stance following a steep increase in omicron infections starting in February. It has eased rather than toughened the restrictions, noting that vaccination and other measures have kept the death toll down.

In early March, the government clarified its policy shift to the "new normal," with Prime Minister Pham Minh Chinh saying COVID-19 would be treated as an endemic disease. The shift drastically changed citizens' attitudes toward tourism.

Vietnam has a population of 100 million and is witnessing an increase in the number of middle-income people thanks to a growing economy. Huge value will be created in the tourism industry if so many people start to travel, said Nguyen Vu Khac Huy, vice chairman of the Kien Giang Tourism Association in the Mekong Delta region.

Given the small number of foreign tourists and low travel costs, Vietnamese citizens may be able to grab their best opportunities to enjoy domestic trips now.

All tourism service providers are on track to recovery as people are eager to travel. But lack of skilled labor in the tourism sector is creating significant headwinds, said Le Bich Ngoc, CEO of a local travel agency. She had to turn away many small groups due to the shortage of tour guides and operators.

Experienced tourism workers found other jobs during the pandemic. Now, they are wary about returning to their former jobs, citing concerns about whether the disease has actually been brought under control, she said.

Bich Ngoc said travelers have been capitalizing on tour promotions offered by popular destinations hungry for visitors after more than a year of lockdowns.

"The cost is reasonable, thanks to many packages that encourage people to travel and spend," Ngoc said. "People want to get out after long months tied to their homes due to the pandemic." But she has had a tough time organizing groups to visit Phu Quoc Island, as the logistics of handling groups has become quite difficult amid the travel surge.