1st Japan, tomorrow the world for South Korean IT startups TOKYO -- South Korean information-technology startups have set their sights on Japan, hoping to use the world's largest mobile app market as a springboard to global expansion. 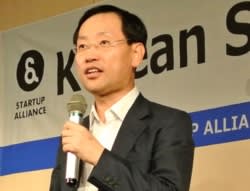 Naver has enjoyed huge success with its Tokyo-based subsidiary Line, the company behind the eponymous free messaging app. Line is in the midst of a global expansion push, and the startups that took part in the recent mission to Japan are keen to emulate its achievements.

On July 9, the companies participated in an event sponsored by Startup Alliance Korea aimed at introducing them to potential Japanese partners and investors. Dubbed Japan Bootcamp, the event included visits to the offices of Yahoo Japan and Google Japan, as well as roughly two hours of presentations to potential Japanese investors.

Each of the startups was given about five minutes to promote their apps and services. Through their presentations, the companies emphasized the importance they attach to the Japanese market. One said it is currently recruiting the president of its Japanese subsidiary, while another said it will provide its app in Japan soon.

Japan Bootcamp is the first overseas event held by Startup Alliance Korea, which was formed last year. The current chill in relations between Tokyo and Seoul did not sway the organizers from going ahead with the mission. The fact that Startup Alliance Korea chose Tokyo, not Silicon Valley, as the venue for its first overseas undertaking shows how much importance the companies place on the Japanese market.

According to U.S. research company App Annie, Japan overtook the U.S. as the world's biggest mobile app market by sales value in October 2013. App sales in Japan grew 230% on the year that month and were three times as large as those in South Korea.

A survey by U.S. search giant Google showed that the number of paid apps installed on smartphones in Japan more than tripled on the year in 2013 to 17.5 per unit on average, the most in the world and 6.5 times larger than the number in South Korea.

Lim Jung-wook, managing director of Startup Alliance Korea, explained why South Korean IT startups are so hungry to expand in Japan. Japanese, he said, have been "in the habit of paying for digital content since the i-mode (mobile Internet service) era." At the same time, Lim said, the smartphone penetration rate in Japan is low compared with other developed countries, making Japan an even more potentially attractive market for South Korean companies.

But Japan is just one part of a grander strategy that will likely see an increasing number of South Korean IT startups establish a presence here, revamp their services, then expand into other markets, such as the U.S., China and Southeast Asia.

Nobutake Suzuki, a partner at Tokyo-based venture capital company Global Brain, heard the presentations at the July 9 event and was heartened by what he saw.