DALIAN, China -- What do you do when your boss is a pain in the neck? Across China, young office workers are whispering "petrificus totalus" to temporarily petrify the evil boss, or even "avada kedavra" to cause instant death. They do so while waving wands from The Wizarding World of Harry Potter, part of Universal Studios Japan and one of the hottest destinations for Chinese tourists today.

With their newly acquired wealth, young Asians are increasingly choosing to spend their money on overseas trips.

Here in this northeastern city, one travel agency is busy with customers in their 20s inquiring about trips to the Osaka amusement park during China's Spring Festival break, in late February. A basic six-day trip to Japan -- with stops in Osaka; Kyoto; Hakone, a hot-spring resort town in Kanagawa Prefecture, just southwest of the capital; and Tokyo -- is advertised at 6,280 yuan ($1,008). Adding a stop at Universal Studios requires an extra night and an additional $340. The Harry Potter tax is hardly a deterrent; the seven-day trips sold out the fastest.

In the Nikkei's Young Consumer Survey, in seven of 10 major Asian cities young adults chose "overseas travel" as their most desired expenditure over the next three years. Koh Qin Wen, a 25-year-old Singaporean, recently took nine days off from her information technology job and traveled around Myanmar. It cost her 1,000 Singapore dollars ($743). "I went to Myanmar to experience the Tazaungdaing Festival, or the Festival of Lights, in Taunggyi, where they release decorated hot-air balloons into the sky to celebrate the full moon," she recalled. "It was electrifying and intense, watching the paper balloons filled with naked fire."

Koh has also been to Thailand and Indonesia over the past year, pushing her total travel budget to S$3,000. She considers the money spent an investment in herself. She has gained experiences, exposed herself to different cultures and met people from all walks of life. Plus, "I love capturing moments -- a magnificent sunset, a charming smile or the delicious street food -- through the lens of my camera and sharing them with my friends and family.

"This year I want to save up and visit South America."

The reason Koh can devote a large chunk of her salary to traveling is because she lives with relatives. She chips in over S$200 for utility bills and groceries but does not have to pay rent. She also has cheap meal options, either from the food stalls on the ground floor of public housing compounds or at the food courts of nearby shopping malls.

Young Singaporeans like Koh had the highest average monthly salary among all 20-somethings in the 10 cities we surveyed, at about $3,070, some $1,200 more than what young Tokyoites said they earn.

When asked if they had any money to spare in the past year, 84% of those in Mumbai, 80% of those in Shanghai and 79% of those in Jakarta said they had "plenty" or "some." According to CLSA, a Hong Kong-based securities brokerage owned by CITIC Securities, 200 million Chinese are expected to take overseas trips in 2020. That is the most from any country, and double those from No. 2 Germany. A Thai tourist takes photos of his girlfriend in Fujiyoshida, Yamanashi Prefecture, Japan.

Of Chinese overseas travelers, 84% like to share photos from their destinations via social networks. And pictures of any old place just won't do. "Showing photos from nearby Hong Kong is not [good] enough," said Aaron Fischer, regional head of consumer and gaming research at CLSA. "Travelers are looking for cool, exotic destinations."

After going abroad, most young Asians want a car. According to the Nielsen Global Survey of Automotive Demand, young Southeast Asians expressed both a high intent to buy a first car or upgrade the one they have now.

That makes sense in Jakarta, where the 10 million residents make do with no subway or commuter train system. Cars and motorbikes remain the main means of transportation.

Cars are also a symbol of success. Thailand, the Philippines and Indonesia are among the top 10 countries in the world that view having a car as a status symbol. In Indonesia, 93% of the people say it is embarrassing not to own a car.

The yearning for cars is actually stronger in the less developed economies. The three countries -- Vietnam, the Philippines and Indonesia -- that listed "cars" as the most desired expenditure in the Nikkei survey are also the three with the lowest monthly salaries. In the top four earning economies -- Singapore, South Korea, Japan and China -- smartphones outranked cars.

One notable takeaway from the survey is the languid state of young Japanese consumers. The ratio of 20-something Tokyoites who said they have "plenty" or "some" money to spare was 25%. Also, 28% said they think the quality of their lives will be better in three years -- the lowest reading for any of the 10 metropolises.

And only Tokyoites said they prefer traveling domestically than overseas.

Shinya Hirose, a 26-year-old Japanese working for an IT company, says he has never once been abroad and does not have a passport. "Overseas travel takes so much time," he said, "and there is nothing that I particularly want to see."

He does like traveling in Japan and recently visited Kyoto -- to see a friend. 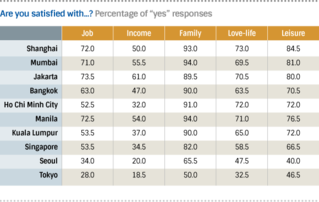 In addition, only 19% of those surveyed in Tokyo said they are satisfied with their salaries, 28% said they are OK with their work and 33% are happy about their love lives. These are all lows among the 10 cities.

What is more, the Tokyo 20-somethings have little get-up-and-go. Only 12% said they want to join a fitness center and 13% said they might sign up for lessons of one kind or another.

While Asian youths are unquestionably going to be the engine of consumption for the foreseeable future, the hole young Japanese find themselves in today could be a warning sign for the rest of the continent as it gets richer.

Tomomi Kikuchi in Singapore, Sadachika Watanabe in Jakarta and Fumi Matsumoto in Tokyo contributed to this story.