Asia braces for US tariffs causing flood of Chinese steel

India, Thailand and Indonesia prepare to aid own players against price drop Steel pipes waiting to be loaded and transferred to the port are seen at a steel mill in Hebei province, China.   © Reuters
HIROSHI KOTANI and AKIRA HAYAKAWA, Nikkei staff writersMarch 23, 2018 20:43 JST | China
CopyCopied

BANGKOK/HYDERABAD, India -- With U.S. tariffs on steel and aluminum having taken effect on Friday, Asian nations are bracing for an influx of cheap steel.

In the latest sign of a chain reaction of protectionism, Asian producers such as India and Thailand are preparing to increase their own import duties, especially against low-cost Chinese steel.

U.S. President Donald Trump signed orders on March 8 for a 25% tariff on steel and a 10% levy on aluminum, effective March 23. Trump's tariffs will tighten the border to the world's largest steel importer, which imported about 35 million tons in 2017.

The tariffs could trigger a new wave of dumping, with major steelmakers in China, Japan, South Korea, Taiwan and Russia looking for alternative export destinations.

Asian countries are especially fearful of Chinese steel, which accounts for half of global crude steel output. While China remains only the 10th-largest exporter of steel to the U.S., Chinese steel products are sometimes exported to the U.S. through intermediaries such as Vietnam and South Korea.

The new American tariffs "will inevitably encourage steel-surplus nations to divert their exports to vibrant consumption centers like India and distort our domestic markets considerably," the Indian Steel Association said.

Cheap steel products from China have hurt Indian steel businesses in recent years, contributing to the association's sense of urgency.

Indian crude steel output rose 6% to 101.4 million tons in 2017, according to the World Steel Association, the third-highest in the world after China and Japan.

India's fourth-ranked steelmaker, Essar Steel, has filed for bankruptcy and is up for sale. Midtier manufacturer Bhushan Steel is in the same boat.

The Indian government has already taken such steps as trade safeguards and anti-dumping duties to buoy prices since early 2017. With the new American tariffs, it may raise its guard further. 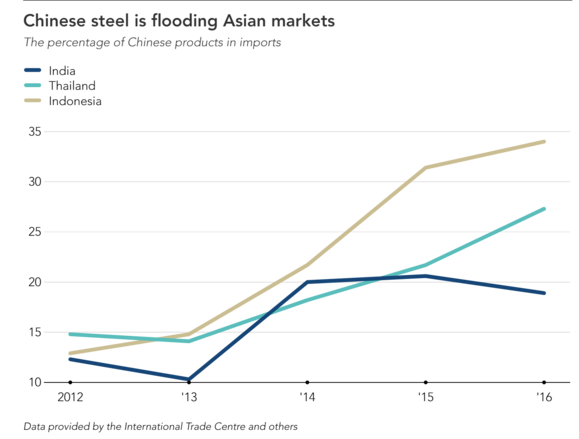 Thailand's Ministry of Commerce is considering ways to counterbalance Trump's tariffs, wary of hits to domestic companies from reduced exports to the U.S. and an increased inflow of overseas products.

The ministry is preparing measures to offset the impact, said Wanchai Varavithya, deputy director general of the Department of Foreign Trade. He mentioned safeguards, anti-dumping taxes and countervailing duties as possibilities.

Washington's import restrictions are expected to reduce Thai steel exports to the U.S. by about 380,000 tons, or 10.5 billion baht ($335 million), according to preliminary estimates by the Iron and Steel Institute of Thailand.

The 27 million tons of steel products pushed away from the U.S. -- equivalent to a third of current imports by Southeast Asia -- would flow into the region, creating considerable downward pressure on prices.

Darmin Nasution, Indonesia's coordinating minister for economic affairs, warns that Chinese steel will flood countries like his when the U.S. tariffs go into effect.

Indonesia levies 10-20% duties on steel imports to protect domestic businesses. The Ministry of Industry and others are also jittery about increased inflows of cheap Chinese steel. The country has in fact been considering raising tariffs for years.

The Industry Ministry will carefully watch America's moves, an official said, implying that the tariffs may be increased. Imports cover half of Indonesia's annual steel demand of roughly 13 million tons.

President Joko Widodo's infrastructure push is helping fuel demand for steel used in construction. Cheaper steel coming into the country would lower procurement costs for these projects but run counter to the government's policy of nurturing domestic industry. State-owned Krakatau Steel and others would all be hit. While Asian steel prices are high, industry insiders are worried that the U.S. import curb will push prices down.

"We're worried that if steel shut out of the U.S. enters Asian markets, it may lead to a significant fall in prices," Kosei Shindo, president of Nippon Steel & Sumitomo Metal, told reporters earlier this month.

China remains only 10th in export share to the U.S. by country because America has reduced Chinese imports by applying antidumping tariffs the past few years. Washington has indicated it is imposing the latest hard-line trade measures because it is wary of Chinese steel products it suspects are channeled into the U.S. through third countries.

For example, hot-rolled steel products made in China can be exported to other Asian countries, which can then process them using cold-rolling techniques and export them to the U.S. As a result, such products reaching U.S. shores are not deemed Chinese imports.

Such indirect imports of Chinese products are believed to be increasing. As a consequence, the U.S. imposed duties on steel imports from Vietnam, finding them to be originally Chinese products that have been reprocessed in Vietnam. Washington also suspects that Taiwanese and South Korean manufacturers may be channeling Chinese products into the U.S.

Steel demand remains strong in Japan, driven by areas such as automotive manufacturing, construction for the 2020 Tokyo Olympics, and redevelopment in the Tokyo metropolitan area.

The Chinese market has not slackened either, thanks to successful efforts to eliminate illegal, inferior-quality steel products as well as production controls introduced this winter to help reduce air pollution.

If steel exported to the U.S. from South Korea, Canada and the European Union finds its way into the Asian market, prices may soften.