JAKARTA -- Asia is home to more than half the world's most dynamic retail hubs, according to new research that reinforces images of the region's mall-strewn megacities.

The research, by professional services and investment management company JLL, says 12 of the fastest-growing retail cities are in Asia, with eight in China alone -- another indication that global economic growth is increasingly driven by the Asia-Pacific region.

JLL lists Dubai as the world's fastest-growing retail destination, with Shanghai second and Beijing third. Places 9 to 13 are occupied by Bangkok, Chengdu, Kuala Lumpur, Jakarta and Manila, respectively. Only two European cities make the top 20 -- Moscow and Istanbul -- with none from Africa. Mexico City is the sole city from the western hemisphere, sitting at number 19.

Overall, JLL lists London as the "most attractive" city for retailers, with Hong Kong second and Paris third. Dubai, Singapore, Shanghai, Tokyo and Beijing all make the top 10, with Bangkok, Taipei, Seoul and Osaka in the top 20. 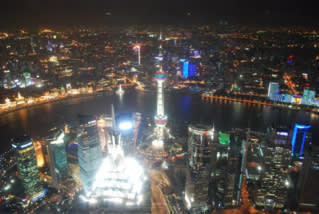 Shanghai at night. The Chinese megacity is projected to be one of the world's retail hubs in the coming years (Photo: Simon Roughneen)

The study looks at the presence of 240 international retail brands in 140 cities -- which altogether make up 36% of the world's gross domestic product, 13% of the global population and a third of total worldwide consumer spending.

"The search for growth is escalating the penetration of international brands across the world's most attractive retail cities, especially in Asia," said David Zoba, chairman of JLL's Global Retail Leasing Board.

Many Western economies continue to suffer from slow growth -- in stark contrast with Asia, where the International Monetary Fund predicts overall growth of more than 5% in 2016-17 and describes the region as "the engine of the global economy."

Asia is urbanizing rapidly as economies develop and incomes rise, meaning that big global brands will increasingly look to Asia as a source of consumers. World Bank research shows that nearly 200 million people in the East Asia and Pacific region --excluding India and its heavily populated neighbors such as Pakistan -- moved from the countryside to cities during the decade after 2000.

In 1800, only 3% of the world's population lived in cities, a figure that rose to 13% by 1900. Now more than half the world's population is urbanized, with projections that 70% or more of the world will live in urban areas by 2050. And while in the 19th and 20th centuries urbanization was mainly a Western and Japanese phenomenon, developing countries are catching up fast, particularly in Asia. Shopping at the IKEA outlet in Tanggerang, west of Jakarta (Photo: Simon Roughneen)

Despite the steady rural-urban shift, only 36% of East Asia's population had moved to urban areas by 2010, with only Japan, Malaysia, South Korea and Taiwan having larger urban than rural populations.

While China had by far the largest absolute numbers of people moving to cities, smaller countries such as Cambodia, Laos and Vietnam showed higher rates of urbanization. Laos more than doubled its small urban population, while high-growth economies such Cambodia and Vietnam both had between 4% and 4.5% annual urban population growth rates. Retail investors are noticing opportunities even in smaller cities such as Phnom Penh, where Japanese mall operator Aeon opened the city's first large shopping mall in 2014.

Asia's cities will continue to grow over the coming decades as the region becomes wealthier. McKinsey Global Institute expects that in the next 15 years, "the center of gravity of the urban world will move south and, even more decisively, east." According to MGI, half of global GDP in 2007 came from 380 developed world cities, with the 22 biggest cities in developing countries contributing a mere 10%.

However, MGI predicted that by 2025 half of the cities in its 2007 rankings will not make the list, with 136 developing world cities entering its ranking of the 600 biggest urban economies -- including 100 from China alone.

"By 2025, developing-region cities of the City 600 will be home to an estimated 235 million middle-class households earning more than $20,000 a year at purchasing power parity (PPP)," MGI reported. The figure is larger than the 210 million such households expected in the cities of developed regions. 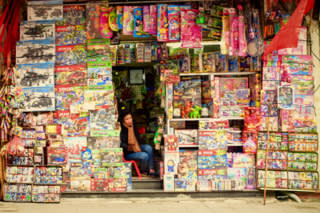 Some Asian cities are lagging behind others in terms of retail. In Hanoi, small streetside shops are a relatively common sight, with large luxury malls still a rarity. (Photo: Simon Roughneen)

Thinktank Oxford Economics said that cities such as Chengdu, Hangzhou and Wuhan "will become as prominent in 2030, in economic terms, as cities like Dallas and Seoul are today."

The thinktank predicted that by 2030 eight European cities will drop out of the global top 50 cities ranking, measured by GDP, while nine Chinese cities will join that group, taking the Chinese total to 17, which will be more than North America and four times more than Europe.

In turn, the thinktank said, this will mean more Asian consumers with money to spend. "Starting from a comparatively low base today, China will boast some 45 million high-income urban households (exceeding $70,000 per annum at 2012 prices and exchange rates) by 2030, putting it well ahead of Europe and hot on the heels of North America. Shanghai will jump from a rank of 69th today to 8th for its number of high-income households in 2030," Oxford Economics said.

Otherwise, however, the seven megacities with the most high income residents will remain the same as today, with Tokyo leading New York, London, Osaka, Los Angeles, Paris and Chicago.

JLL said that for retailers, vying for market share in emerging economies is sometimes risky, but the potential prize -- market access to vast populations and rapidly expanding middle classes -- outweighs any perils. For example, China's anti-corruption crackdown has had "a knock-on effect" on the luxury goods market in the world's second-biggest economy, said James Hawkey, JLL's head of retail for China. But retailers are nonetheless "increasingly comfortable dealing with these risks, and generally have their eyes on the long-term prize of establishing a strong position in major world markets."

Although incomes and spending power remain lower in many Asian countries and cities than in the West, part of the attraction of smaller, less-developed markets is relatively low rental costs.

"Places like Ho Chi Minh City, Jakarta and Bangalore present an opportunity for retailers to establish their brands at rents of less than $2,000 per square meter per year with projected in-store sales increasing by 8% to 10% until 2019," JLL reported.

Wealthy mid-sized cities or trade-oriented city-states such as Singapore and Hong Kong also benefit from high numbers of visitors such as tourists or business travelers.

But Asia's urbanization will not mean that rural dwellers will be ignored by retailers, particularly in China.

"Shanghai exerts a 'gravity effect' over its surrounding cities and provinces due to its size and the wealth of its retail offer. Therefore, close to 80 million people within day-trip distance to Shanghai will regularly travel to that city for large shopping sprees," McCord added.