TOKYO -- Fintech is rapidly changing the way consumers pay for dinner, or even a dip in a public bath.

New cashless, cardless payment systems are sprouting up in Japan one after another. Thanks to the marriage of finance and technology, consumers are now able to carry out transactions with nothing more than a touch or wave.

This past summer, Washoku Dining Kuroda, a Japanese-style pub in Tokyo's Shinjuku Ward, installed a biometric payment system. Customers simply place their thumbs on a small sensor. Naturally, individuals need to register before going for a night on the town. Washoku Dining Kuroda, a Japanese pub in Tokyo's Shinjuku area, offers customers the option of paying with their fingerprints.

The system was developed by a Tokyo startup called Liquid. Rather than the integrated-circuit cards used in typical electronic wallet systems, it identifies customers by their fingerprints and -- for extra security -- veins. The system recognizes the electrical signals emitted by the body, too.

"It's impossible to fake the fingerprints because Liquid Pay can determine whether the prints are those of a living person," said Yasuhiro Kuda, Liquid's president.

The company says fingerprints, bank balances and other information are stored securely in the cloud, rather than at shops and restaurants. The system uses ordinary Internet connections, but Kuda stressed that the data is encrypted, ensuring it "is safe from theft."

Cash, credit cards and IC cards are not exactly foolproof, of course -- they can be lost or stolen. Liquid's system is also touted as a cheaper alternative to IC card technology.

Fitness clubs and other establishments are introducing Liquid Pay, in addition to restaurants. Kuda said the system is catching on with public bathhouses and at beaches, where people tend to worry about the whereabouts of their wallets. Liquid on Oct. 31 launched a test run at Huis Ten Bosch, a theme park in Sasebo, Nagasaki Prefecture, that draws plenty of foreign tourists. Visitors can register their biometric data at the entrance and other points. They can then use the Liquid Pay system at the park's restaurants and souvenir shops.

This is the first time Liquid has put the system through its paces at a massive commercial facility that attracts a few million visitors a year. The company says the trial has gone smoothly so far. The venture intends to branch out to department stores, hotels and other commercial facilities in Tokyo soon.

The service will link vein patterns with credit card information, allowing customers to make fast and secure payments simply by waving their palms over a scanner. This authentication technology has already made its way into ATMs. 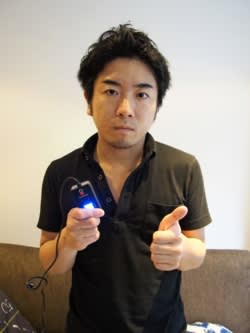 The system uses a virtual private network, inaccessible from the outside. The scanner photographs the palms with near-infrared light. Using the VPN, the characteristics are then compared with palms registered in a database. This process takes 0.8 of a second. If a match is found, the payment goes through.

JCB in July tested the service in the cafeteria of its Tokyo headquarters, with several hundred employees participating. In late October, the company conducted a trial at the JCB World Conference in Indonesia. The event brings together representatives of JCB's partner companies and financial institutions around the globe; 500 attendees used the service.

In the course of these tests, the company confirmed that factors such as skin color do not affect the system.

Fujitsu zeroed in on palms because the networks of blood vessels are more complex than in, say, the fingers. Put another way, palms contain more information. The veins are also thicker, mainline blood vessels, which helps to ensure stable authentication.

Fujitsu started supplying vein sensors for ATMs in 2004. Later, it expanded the business to corporate-use PCs. The company says more than 63 million people have already used some 470,000 of its sensors.

Leveraging the expertise it has accumulated over the years, Fujitsu has tightened up security. It says the so-called false rejection rate is down to 0.01%, while the false acceptance rate is a mere 0.00001%. 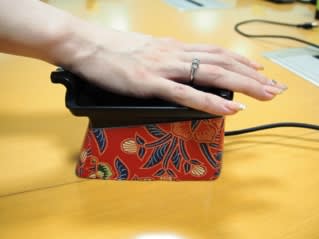 Some other credit card companies have also tested payment services using palm authentication, according to JCB. Nevertheless, the company hopes to spread the Fujitsu system around the globe. It is planning a large-scale trial within the next year or so, aiming to commercialize the service in two or three years.