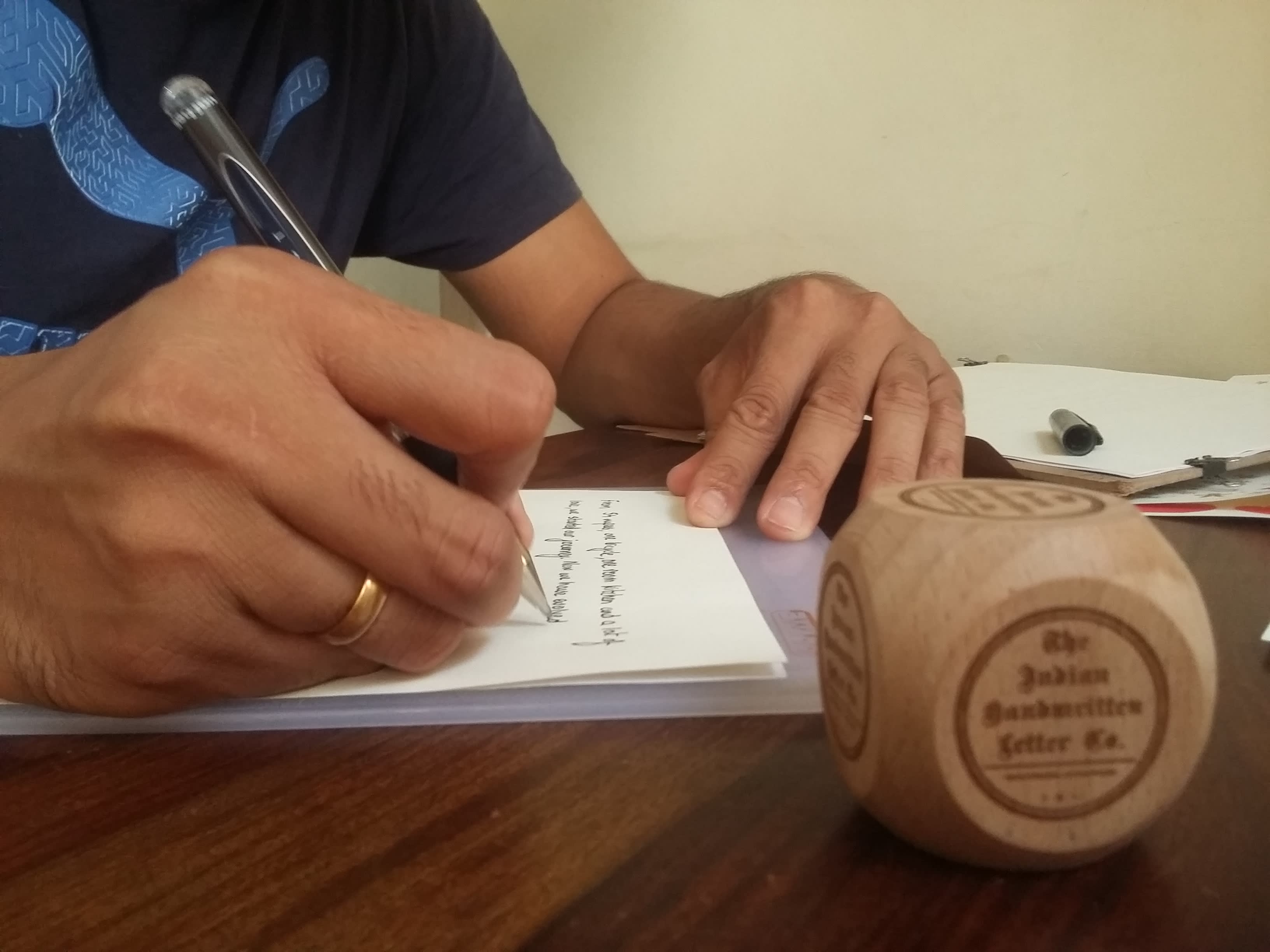 BANGALORE -- "From 54 rupees, one bicycle, one room & a kitchen and a lot of love, we started our journey."

Ankit Anubhav pens the opening lines of a love letter on ivory Italian paper with his black gel pen. It is a special message from a husband to his wife on their 25th wedding anniversary.

"Now we have evolved so much and still the only thing that has stayed is your love."

Anubhav conjures up line after line, sitting at a cluttered mangowood table in the corner of his drawing room. He writes letters to others on behalf of others. It is his job. 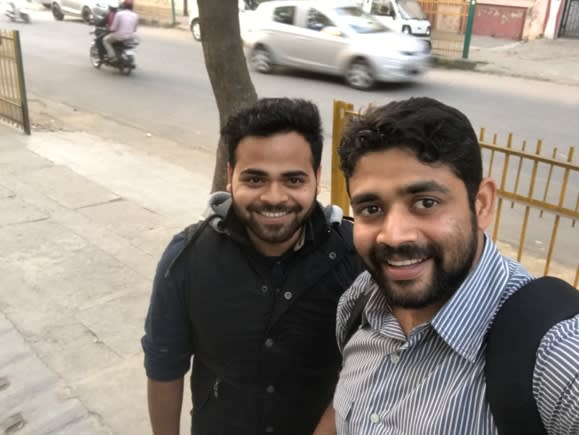 He is nothing like the character Mahadev in the Bollywood film "Welcome to Sajjanpur" -- seated at a wooden table under a tree with his cloth bag of stationery, writing letters and filling in forms for illiterate lovers, housewives, mothers, snake charmers, eunuchs contesting elections, and a childhood crush who is married to someone else.

Anubhav is a modern-day amanuensis. Unlike Mahadev, and professional letter writers of the past, his clients are literate, but too busy to write. He works through a company, The Indian Handwritten Letter Co., set up with partner Jashwanth Cheripally. Clients seek them out through the company's website.

The clients send their content via the website, and it is then written down on luxurious paper. The letter is then posted or sent by courier to the addressee.

Anubhav, 30, is an electronic engineer by training, and Cheripally, 25, a software development engineer. The long-time friends decided to turn their love for hand-written letters into a business two years ago, only to arouse skepticism. "Even our mentors discouraged us," said Anubhav. "Nobody believed that in this digital age, there could be takers for handwritten letters." But they were determined, fueled by their own love for hand-written letters, both having been to boarding schools.

Anubhav had already tasted some success in an unusual venture. Five years ago, having experienced heartbreak himself, he started a break-up helpline that offered sympathy, by email and phone, to those disappointed in love. Today the venture offers a wide range of counseling services, including a mini break-up kit, or counseling service package, for 2,500 rupees ($39), a mega break-up kit for 10,000 rupees, and help with divorce blues, also for 10,000 rupees. The company charges clients 2.5 rupees per word for its handwritten letters. (Photo by Anuradha Sharma)

"The idea of handwritten letters came as a logical step," said Anubhav.

Today, Anubhav and Cheripally have a network of writers -- 13 and rising -- mainly in India, the U.K., the U.S. and Australia. They offer letter-writing services in 10 Indian languages, including English; recently, there was an order in Chinese too.

After a few letters, they realized that copying the messages word for word was not enough -- clients also needed help in drafting content, because not all are gifted writers. For 2.5 rupees per word such clients can now get a professionally composed letter, postage extra. The charge is only 1 rupee per word when the content is provided.

"It takes some research to prepare content. We have to ask a lot of questions to the clients about them and their addressees to figure out how the messages need to be put," said Anubhav.

The company offers more than romantic letters. It is hired by companies in India and abroad to write letters to clients as part of their corporate communications. The startup plans to expand, with a network of another 15 writers who will create business-related letters.

"We are in the business of communication," said Anubhav. "And we want to offer our services in all forms of communication, both business and personal. Say you want leave from the office but don't know how best to draft the application letter to the boss: We will provide the solution."

Cheripally, who looks after the technical aspects of the business, is working on upgrading the website. "We want to make it more user-friendly," he said. "One of the things we want to introduce is customizing fonts. Clients can submit samples of their handwriting which can be copied by our calligraphers. The process has to be system-generated, and I am currently working towards achieving that."

Of the 100 or so letters that the company pens every day, more than 80 are love letters. Business letters are mostly ordered from abroad. Asked why more Indians like outsourced, handwritten letters, Cheripally hazards a guess: "Maybe because people are more relationship-oriented here."

"I thought it was cool to get a letter written by someone in this digital age," said Swati Singh, 29, a Delhi-based freelance working in marketing. She is a regular customer, ordering four or five letters a month, at least two to her Bangalore-based boyfriend. "I love handwritten letters but do not have time to put everything together. Besides, I am too lazy to pen and ship them. I am also very particular about little things, like stationery, etc."

She swears by the power of the handwritten letters, and insists that outsourcing the writing to strangers is not an issue. "Yes, there is ambiguity about privacy, but who cares when our lives are open books anyway; why hide?"

Singh's partner is aware that the letter writing is outsourced, but he likes "her madness" and enjoys getting the outsourced letters.

Aashi Gupta, 22, a student from Indore, "wrote" a letter to her friend in Mumbai on his birthday recently. "It was his birthday and I could think of no better gift," she said. "He was overjoyed to receive it. At first, he thought it was I who wrote, but then he understood. I had my exams and would not have had the time to write."

Hand-written letters have caught on with many as the "new cool thing to do," said Anubhav. In true Bollywood fashion, an engineer with a major corporation in Delhi had a letter sent every day for seven days to his girlfriend in the run-up to Valentine's Day, then flew to Bangalore to propose. Valentine's Day is when most orders come.

Sometimes, the letters are from people in tough situations. An American soldier stationed in Iraq used the company to send a letter to his wife back home.

Then there are times when people are writing to their spouses living in the same house. "The message is like, 'why are you not talking to me?' or just a simple 'sorry,'" Anubhav said.

He finds it interesting how people open up, and not just those in romantic relationships. "Once, an estranged daughter wrote a long letter to her mother -- for the first time in 14 years. There are so many things that people want to say to each other.

"Writing makes it easier. Even a simple 'sorry' is much easier written than said. But, despite the will to write, nobody ends up writing because either they've lost the habit or it takes too much organizing. Hence, they outsource it to us."