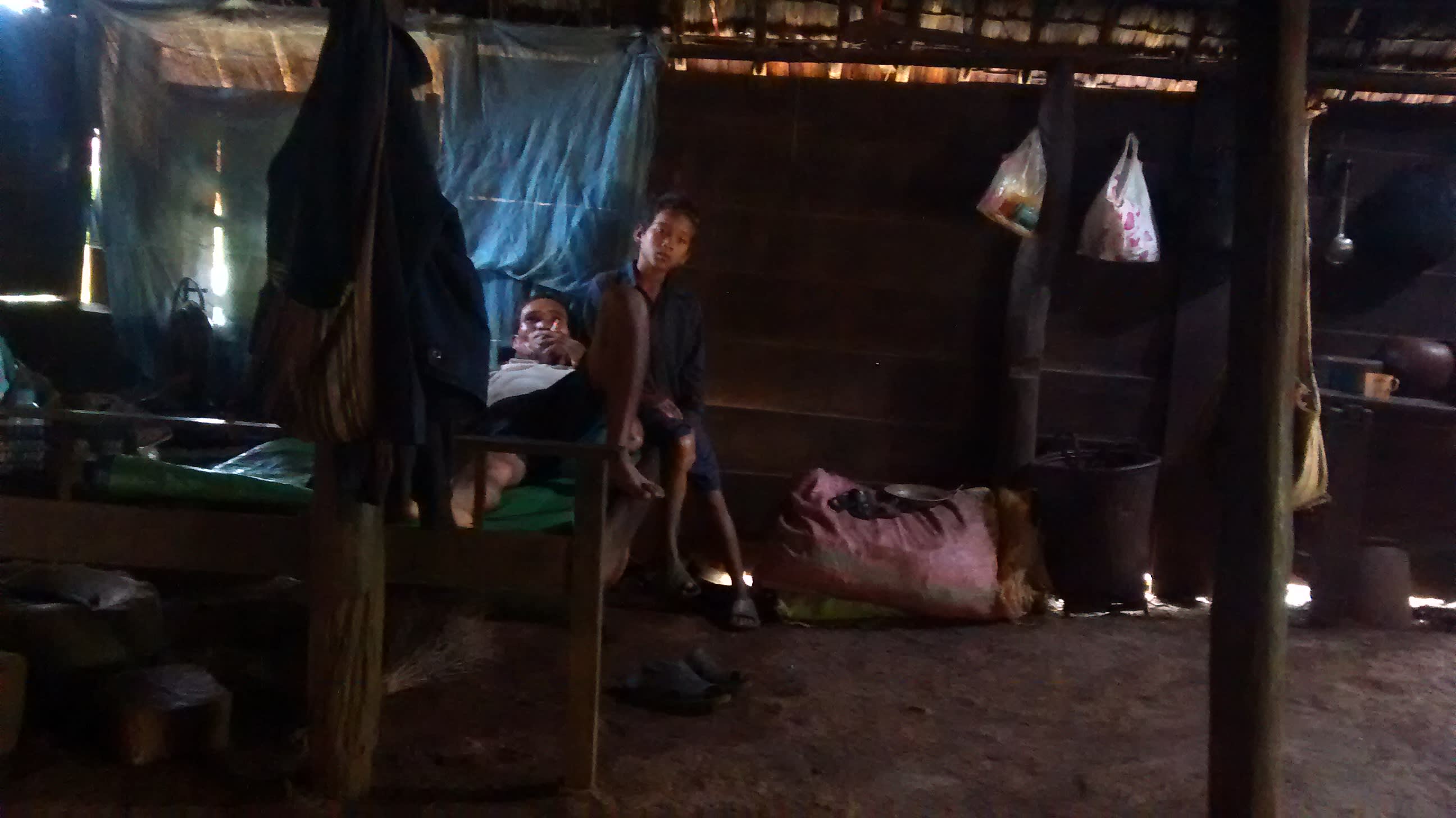 Chhop, a Bunong elder, and his grandson share a quiet moment in their home in Bousra village. The house is one of the few remaining constructed in the traditional style. (Photo by Abby Seiff)
ABBY SEIFF, Contributing writerFebruary 6, 2015 19:00 JST | ASEAN
CopyCopied

MONDULKIRI PROVINCE, Cambodia -- Row upon row of rubber trees stretch in every direction from Khan Channy's neat wooden house near the border with Vietnam.

The nearest neighbors are kilometers away, the nearest village even farther. But for Channy and her family, their home in Bousra, Mondulkiri Province, is far from a life of rural idyll. It is a protest.

"The company came here in 2007 and started to cut trees in 2008," Channy said, referring to Socfin KCD, the Cambodia subsidiary of Luxembourg-based rubber and palm oil giant Socfin Group. It has since received several concessions for planting rubber trees, covering roughly 7,000 hectares of forests that are home to the indigenous Bunong people. 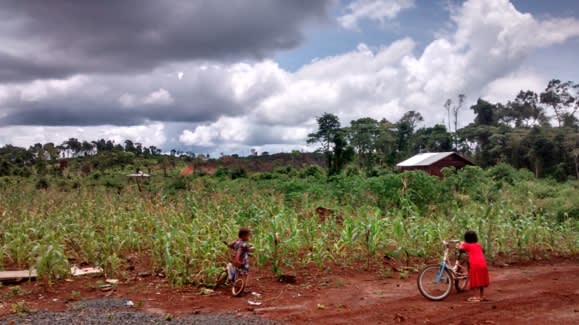 Children play on land handed over to rubber growers that overlaps with a forest the Bunong hold sacred. (Photo by Abby Seiff)

"They came and razed the houses and fields. Some people were paid money, some were not. ... But for us, we don't need money. We need land," Channy explained. "It's my land and my parent's land. We don't want to move. We will die here."

Cambodia's forests have long been slipping away, plundered heavily ever since the Khmer Rouge turned to illegal logging to fund their regime in the 1970s. But in recent years, the pace has been quickening.

Prime Minister Hun Sen sees rubber playing a major role in the economy, and his government has encouraged private investors to set up sprawling plantations.

According to government figures, 1.2 million hectares of land -- at least a third of the country's arable land -- has been granted to commercial growers through so-called economic land concessions. More than a quarter of that is for rubber plantations.

In February 2013, Hun Sen predicted a future in which rubber would be a key driver of the economy, employing a tenth of the population and netting hundreds of millions in annual exports.

"In achieving our commitment to the diversification of agricultural production, rubber in particular is proving to be an increasingly valuable industrial export crop for Cambodia," he said at an economic conference in Phnom Penh that year.

From a historical perspective, the prime minister's hope for a rubber boom makes sense. The French established large rubber plantations in Cambodia when it was a French protectorate, and the industry continued to flourish after independence in 1953. Until civil war and the Khmer Rouge upended the country in the 1970s, Cambodia was one of the world's largest suppliers. Through much of the previous decade, the industry produced more than 50,000 tons of rubber annually.

In recent years, global demand has once again far outpaced supply, making the crop attractive to small, cash-hungry Southeast Asian nations. But prices have grown volatile lately and rubber suppliers have been scrambling to cope with oversupply. Industry associations representing Asian growers made a pact last year not to sell below a floor price of $1.50 per kilogram after prices fell to a five-year low.

Rubber prices have stabilized, but the five-year decline showed the dangers of relying too heavily on a single crop.

While Thailand has long provided incentives to farmers who diversify by replacing rubber trees with palms, Cambodia has yet to do the same. In fact, it has shown no desire to back away from a gung-ho policy of granting rubber concessions, many of which have damaged the environment and threatened the livelihoods of people like Channy.

Though Cambodia has thorough laws in place protecting natural resources and indigenous land rights, they are rarely enforced.

Only eight communal land titles, introduced in 2001 to protect large tracts of land inhabited by indigenous communities, have been awarded. At the same time, legally protected forests have been reclassified from state public land to state private land and sold to agriculture companies.

There is an urgent fight to protect the forests in the country's northeast region, where Channy and her ancestors have lived for thousands of year.

A member of the Bunong minority, Channy is one of an estimated 200,000 indigenous peoples in Cambodia. While each of the 24 indigenous groups have unique cultures and customs, most share a trait that has put them into direct conflict with the rubber push: They rely on natural resources to survive.

For the Bunong, whose population hovers around 40,000, the forest is the cornerstone of their lives. The forest is where they collect food, building material and medicine, and where they practice small-scale agriculture. In sacred sections, it is where bodies are buried and gods reside.

The Bunong, like other hill tribes dotting the highlands of Cambodia, Laos and Vietnam, practice animism. Over the centuries, the group has had contact with traders, French colonialists and missionaries, the Khmer Rouge and with government policies pushing "Khmerization." In spite of such incursions, however, geographical isolation has helped preserve Bunong culture long after other minorities all but disappeared.

But with the loss of the forests, many worry the Bunong's days are numbered. Given the culture's intricate links to the land, pushing members from the forest into villages simply doesn't translate.

"It's a passive genocide," said Bill Herod, a longtime Mondulkiri resident who founded an educational center called the Bunong Place. The former aid worker, who has been based in Cambodia since the Khmer Rouge era, said he sees little hope for the continuation of Bunong and other cultures.

The Bunong have the highest rate of maternal mortality and the lowest rate of literacy in Cambodia, he added, a pattern observed throughout the world among marginalized minorities.

The speed at which the government is awarding land concessions to foreign investors has allowed little time for the implementation of thoughtful protection policies.

As a neighboring nation and close ally of the current government, Vietnam has seen many of its companies receive rubber concessions in Cambodia under Hun Sen.

In a report on the two companies issued in 2013, environmental watchdog Global Witness alleged large-scale illegal logging and land-grabbing carried out with the complicity of local officials and tycoons.

"Indigenous ethnic minorities have disproportionately borne the brunt of these impacts," the report notes.

The indigenous population has filed court complaints and sought help through official channels, but the cards are stacked against them, they often resort to haphazard protests.

In late December, hundreds of Bunong farmers in Mondulkiri occupied land they said was illegally seized by a Vietnamese rubber company and hijacked its tractor. Weeks earlier, villagers in another province blocked a major highway for hours in protest against a rubber company that they said had stolen their land.

Law enforcement tends to be on the side of business and has been known to resort to violence in their dealings with local communities. In 2012, a 14-year-old was shot dead by soldiers evicting villagers locked in a dispute with the neighboring rubber plantation.

Mounting pressure has borne some fruit. In response to the Global Witness report, the Vietnam Rubber Group in August 2014 established an information and complaint mechanism for local communities.

But unless the government reverses its policy of steadily selling off Cambodia's forests, the future of the indigenous population looks dire.

Chey Bunthy, project director at the Mondulkiri Resource and Documentation Center, said the Bunong people's livelihood depends on the forest. "If it's cut down, they have nothing," she said.

Last year, the center held a gathering of Bunong representatives from across the province and asked them how long their culture will survive. "They said, 'maybe ten years, maybe twenty," Bunthy said.