TOKYO -- Move over, salaryman, Japan's capsule hotels want to make room for guests willing to pay a bit more for a night's sleep.

The minimalist facilities typically offer narrow, rectangular compartments for 2,000 yen to 3,000 yen ($18 to $26) a night. Baths and lounges are communal.

Now new operators are moving into the industry, offering fancy decor, free drinks and photocopiers in the lounge. Bath areas can include saunas, and prices sometimes exceed 5,000 yen.

Tokyo-based Sanza opened the Anshin Oyado capsule hotel in the capital's Shimbashi district about 13 months ago. Its pods go for 4,980 yen to 6,480 yen a night. Compartments with 24-inch monitors cost 5,480 yen, those with 40-inch displays fetch 5,680 yen. 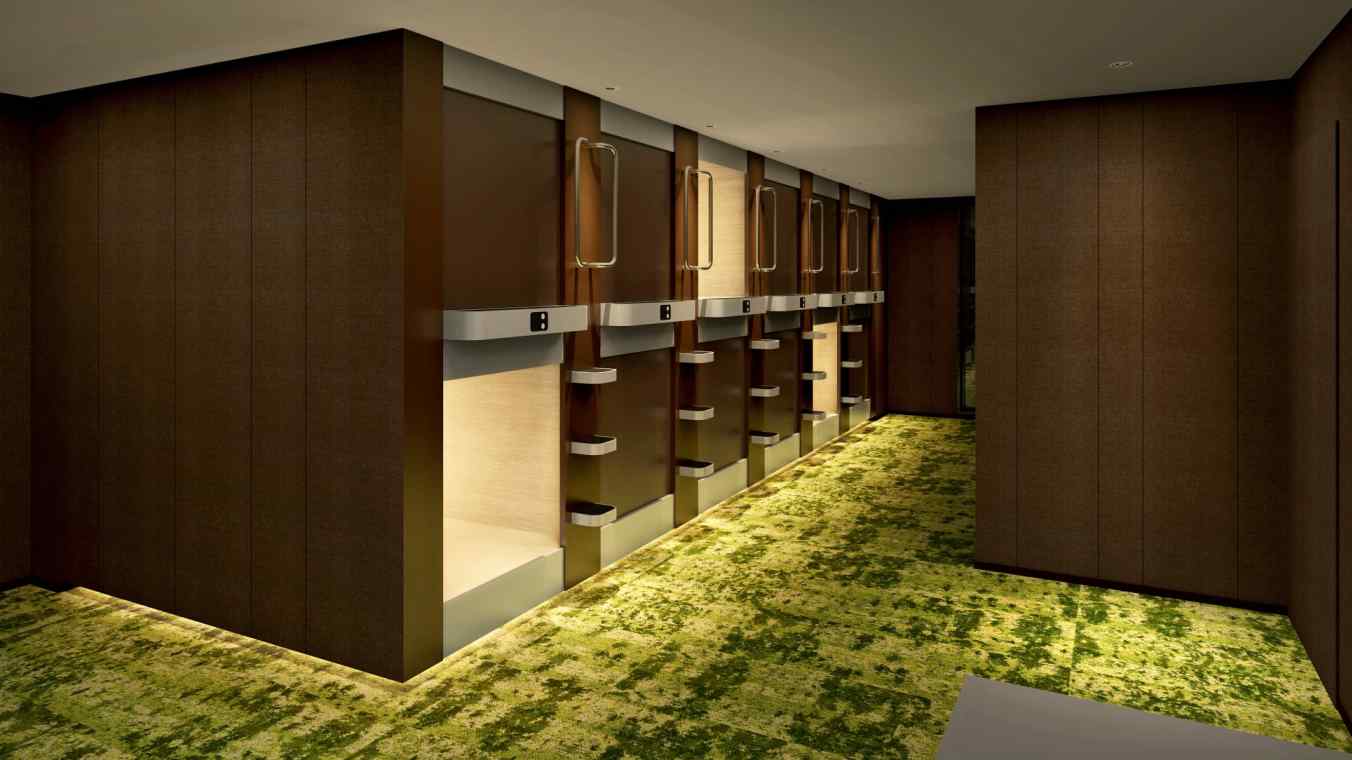 One-time flophouses fit the bill for budget travelers in Japan

Reading, drinking, sleeping -- all in one bookshop

Bic Camera and the new face of Akihabara

The relatively high prices mainly reflect the hotel's communal facilities. In its lounge, guests can help themselves to soft drinks and miso soup, and use massage chairs and copying machines at no extra cost. There's also a large public bath equipped with a mist sauna.

In addition, the hotel rents tablets that allow guests to watch a variety of video content and to check whether the toilets are occupied or if there is space left in the public bath.

"It's a capsule hotel designed to offer a luxurious feel, and so we went for rather high pricing," said Kazuhiro Matsuda, who heads the company's Anshin Oyado business.

According to Matsuda, the hotel's guests include local residents, and 75% of its clients stay two or more times a month.

Bagus, which operates billiard parlors, golf simulators and other entertainment facilities, in October opened the Glansit Akihabara. The Tokyo capsule hotel has a stylish front lounge area with wooden decor. Rooms go for 3,500 yen to 7,000 yen a night. The clientele is 25% female.

Manager Taku Kobayashi said the hotel is designed to appeal to women. Bagus' female employees advised on the selection of complimentary toners and hairpins, he said.

In addition to conventional capsules, the hotel has 16 desk- and locker-equipped rooms.

Rates start at a relatively high 5,000 yen or so, which doesn't seem to deter customers, Kobayashi said.

"We have high pricing," he said, "but we're seeing strong demand, and the rooms [with a desk] get reserved first" despite their higher prices. 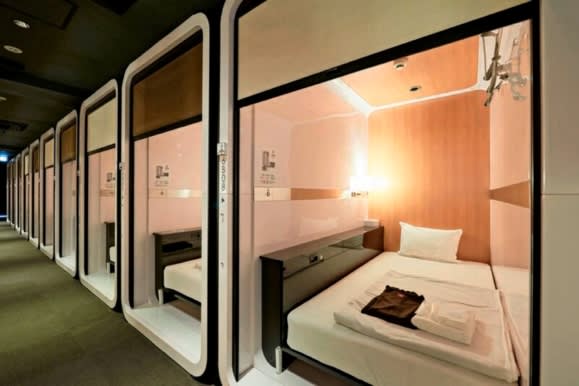 Yet another operator, Tokyo's First Cabin, offers rooms much larger than typical capsules, with ceilings as high as 2.1 meters, allowing guests to stand or even pace inside. Business class rooms have 2.5 sq. meters of floor space and cost about 5,800 yen a night, while 4.4-sq.-meter first class rooms go for 6,800 yen.

A branch in Tokyo's Tsukiji district recently opened a bar accessible to nonguests.

"The bar has added a pleasant, party atmosphere to the hotel," First Cabin Vice President Tomotaka Azuma said, "and our customers from the neighborhood are enjoying it, too."

Japan's hotel industry is expanding, buoyed by a government that is trying to keep the economy afloat with the help of foreign tourists. The goal is 60 million annual overseas visitors by 2030 -- a number that would overwhelm the industry as it now stands.

Capsule hotels and other "simple lodging facilities," as defined by law, are well-positioned to capture the expected surge in demand as they can accommodate large numbers of guests in relatively small rectangles.

Thanks to the "simple" designation, these facilities are not required to have windows in all rooms. This makes it easier to repurpose existing buildings into capsule hotels and thus saves on having to build from the ground up. Many First Cabin hotels, for example, are converted school houses, office buildings and pachinko parlors. 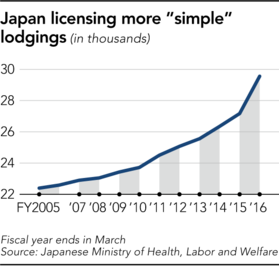 This also explains why the industry is attracting new players.

The lodgings might be simple under Japanese law, but some do manage to differentiate themselves. Tokyo's Akihabara Bay Hotel, which opened in May 2016, is female only. Rooms go for 3,800 yen to 6,900 yen per night.

A spokesperson for the operator, CVS Bay Area, said the hotel's guests like the sense of safety and comfort they feel during their stays.

The hotel is also enjoying a boost thanks to a tie-up with "Ikemen Revolution: Alice & the Love Magic," a smartphone game that simulates dating cute ikemen guys.

Rooms are decorated with a picture of one of the game's 14 ikemen characters. Some guests can curl up with an ikemen-printed futon cover. Novelty goods are handed out, and a large panel featuring a scene from the game is set up in a lounge for selfie-taking purposes.

The hotel, which gets a lot of repeat customers, currently has an occupancy rate of about 70%, the spokesperson said.

Meanwhile, tech company and factory's And Hostel chain gives guests a glimpse into how the internet of things might automate homes. Visitors can use their smartphones to control the lighting, air-conditioning, even the lock on the door. A night's stay in an IoT-equipped room runs from 8,500 yen to 12,800 yen. Some 70 percent to 80 percent of the hostel's guests are foreign visitors, and factory spokeswoman Yumi Sato said.

The company is looking to open 10 more branches during the next fiscal year.