US leads in total submissions while Japanese figure drops 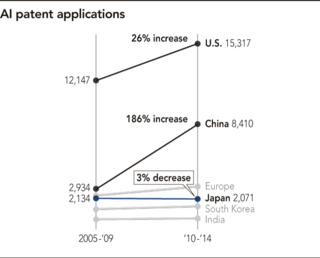 The Tokyo-based company's tally showed total applications in China grew about 190% to 8,410 in the five-year period from 2010 as compared with the figure for the previous five years. That represents the biggest jump among the 10 countries and regions surveyed, which include the U.S., China, Europe, Japan and South Korea.