SHANGHAI -- China has set its sights on transforming into an industrial giant, as rising labor costs are making it difficult to continue serving as the "world's factory." 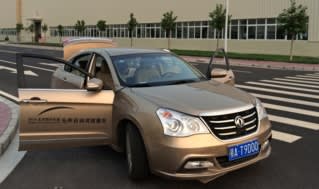 Wuhan Kotei Technology has been carrying out on-road tests as part of efforts to develop self-driving technology.

The global automobile industry is racing to develop technology that will lead to self-driving cars. Recognizing the potential of becoming a leader in this field, U.S. information technology behemoths, such as Google and Apple, are joining the race. Since expertise in camera, radar and other technologies are needed in building the car of the future, outsiders, such as Sony with its image sensor prowess, are also entering the fray.

Chinese companies are largely absent from this race, although the China market accounts for a quarter of all new-car sales in the world. The country's auto industry still sees the field of electric vehicles as a cutting-edge industry.

"For the Chinese car industry to survive in the world, development of self-driving technology is essential," said Zhu. He has launched an industry-academia consortium in Wuhan.

"China's robotics industry will fall into the same trap the auto industry has found itself in," said Qu Daokui, chief executive at Siasun Robot & Automation.

Nearly 200,000 industrial robots were operating in China in 2014. The number is expected to jump to more than 400,000 by 2017, making China one of the biggest markets, as demand for automation continues to strengthen amid surging labor costs. But foreign makers, such as Japan's Fanuc and Switzerland's ABB, control much of this high growth market, just as foreign carmakers dominate the Chinese automobile market.

"In China's robotics market, domestic makers were swept into intense competition with foreign rivals before they could develop their business sufficiently," Qu said.

China must transform itself from the world's factory into industrial giant, declared Premier Li Keqiang on the opening day of the National People's Congress on March 5.

Beijing's concern for the future of domestic manufacturing is not difficult to see. China has achieved dramatic economic growth by supplying clothing, appliances and information technology devices cheaply to the world, taking advantage of low labor costs. But this business model is coming to an end, as wages have risen considerably in recent years, leading to an increasing number of foreign companies moving operations to other countries.

The government's response to this is "Made in China 2025," a 10-year plan designed to bolster China's manufacturing industry. With keywords, such as networking, digitalization and intelligent technologies, the plan unveiled by Li sounds like a carbon copy of Germany's "Industry 4.0" vision. 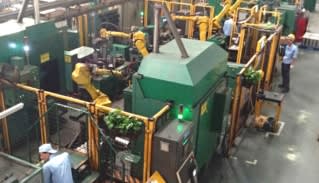 In reality, however, the Chinese manufacturing industry is still a long way from the "Industry 4.0" phase, where automated factories are linked via networks. The industry has only just begun embracing the "Industry 3.0" stage, where production is automated using computers, some 30 years behind industrialized countries.

There is, however, a strong desire in China to become a major global manufacturing power, not by making products for foreign companies, but by churning out China's own brands. The country's manufacturing industry has been building a foundation toward this goal.

The growing number of foreign-educated people is one key factor contributing to the advancement of the domestic manufacturing industry. More than 1.8 million Chinese people who studied overseas have returned home in the 30-odd years since Beijing adopted liberalization policies. Wuhan Kotei Chairman Zhu is one such person. He studied at the University of Tokyo in the 1990s, obtaining a doctorate in his field. These people's skills, knowledge and connections are expected to continue helping the Chinese manufacturing industry beef up its strength.

These companies made their moves not just to get their hands on overseas sales channels, but to also tap into research and development personnel, improving technical levels over the medium to long term.