China lets a million startups bloom -- and then some SHANGHAI -- China is fertile ground for startups. Every day, some 12,000 new businesses are created there. Having the world's largest population means plenty of chances to test new products and services, and the country's often freewheeling business environment rewards innovation.

That innovation was on display recently in a Shanghai drugstore, where a customer was taking his blood pressure and blood sugar readings with in-store equipment. An employee asked him for his phone number and other personal information and then fed the data into a computer. On the screen, the customer's readings from earlier visits, as well as his shopping history there, popped up.

"Your blood pressure has been rising recently," the employee told him, then recommended specific medicines based on the latest readings.

This personalized service was made possible by Shanghai CareLinker Medical Technology. The company has developed an online system that links terminals at some 5,000 drugstores across China. The central server stores health data collected from customers via the terminals at drugstores. The information is updated with each visit and can be viewed from any terminal.

Liu Kai, a former doctor, launched the business in October 2014 with an ex-Samsung engineer and other partners. He was drawn to the idea of tailoring treatments to the individual. "Two people with similar symptoms might receive the same medicine," Liu said. By having access to more data on each person, Liu believes, a more accurate picture of their health will emerge, meaning a better chance to treat them with the medicine best-suited to their needs.

The service has quickly spread across Shanghai and other cities. Today, it has more than 1.6 million registered users.

A big part of the reason the system has caught on so quickly is that Chinese drugstores do not operate under regulations as strict as those seen in, say, Japan and the U.S., where drugstores cannot sell certain types of medicine without a prescription written by a doctor.

Another Chinese company with a focus on innovation is NextVPU, which has developed eyewear for the visually impaired. Using a mix of GPS technology and images taken from a built-in camera, the glasses enable users to "see" where they are and which direction they are facing, with a range of error of 1 to 3 meters. "It's like a virtual white cane," said Alan Feng, chief executive of the startup. NextVPU's high-tech eyewear is designed to help the visually impaired.

"I wanted to bring real innovation, not something copied from the U.S.," the entrepreneur said. The business was founded as recently as May, but it has already raised $1 million in venture capital. The company plans to start taking orders for the product by December. The unit price will be around 5,000 yuan ($749).

"Chinese startups can react quickly to improve their service or product, and do it over and over again," said Yang Yi, a partner at venture capital company CyberAgent Ventures (Beijing) Investment Consulting.

This ability to quickly and repeatedly refine a product means that even copycat goods can potentially outperform the original.

In April, Chinese home electronics manufacturer Xiaomi launched a rice cooker that, thanks to relentless efforts to cut costs, has a price tag of only about half that of rival Japanese products.

The product, which sells for about 999 yuan, cooks the rice differently depending on the variety and preference of the user. When users scan the bar code on the rice package with a smartphone, the cooker receives the data and automatically optimizes the power level and cooking time.

The product has been a huge hit, with some people even saying it produces tastier rice than Japanese rice cookers.

The field of virtual reality is growing fast in China. One company riding the growth wave there is Idealens, founded by Song Haitao in 2014. Last month, the company launched Idealens K2, an all-in-one type of head-mounted display for virtual reality systems. 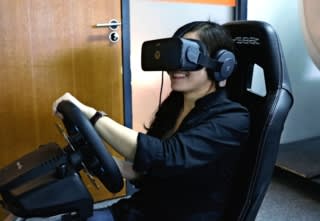 "We aim to sell 1 million units over the next year in the world," said Song. The chips it uses were co-developed with South Korea's Samsung Electronics and the manufacturing is handled by Taiwan's Hon Hai Precision Industry, better known as Foxconn Technology Group.

Song was involved in the development of Google Glass, the high-tech eyewear from the U.S. search giant. Despite the product's relatively low price tag of 3,499 yuan, Song said it is more sophisticated than rival devices in terms of such functions as positioning.

Also joining the virtual reality movement is Shanghai-based Pimax, which rolled out a high-resolution 4K headset earlier this year. Founded in 2014, the company is looking to make a global splash on the strength of the product's performance capabilities.

Since April, Pimax has been selling a total of several thousand headsets a month in China, the U.S. and elsewhere. In addition to producing high-resolution images, the device is able to adjust to the eyesight of the user, obviating the need to wear glasses at the same time.