Audi was left out of the China-led sales boom, due partly to friction with its dealers early in 2017.
Business trends

FRANKFURT, Germany -- China accounted for almost 90% of sales growth at leading luxury automakers in 2017, The Nikkei has calculated, highlighting the huge market's power to make or break car companies' earnings.

China made up 27% of overall sales, three percentage points more than in 2016. The Asian economic powerhouse led sales growth by far: The number of luxury autos sold in the country rose 17%, compared to a paltry 1% in the rest of the world. Put another way, China accounted for 360,000 of the 420,000 additional autos the nine makers sold last year.

Mercedes-Benz proved to be China's most popular luxury brand, with sales growing 27% to 618,000 vehicles in 2017. Dieter Zetsche, chief of German parent Daimler, credited that success to changes in Mercedes' lineup meant to appeal to Chinese customers.

Lexus and Cadillac saw sales outside China drop on the year amid a slump in the U.S., a core market. But in China, Cadillac's sales rose 50%, accounting for roughly half of its worldwide business. 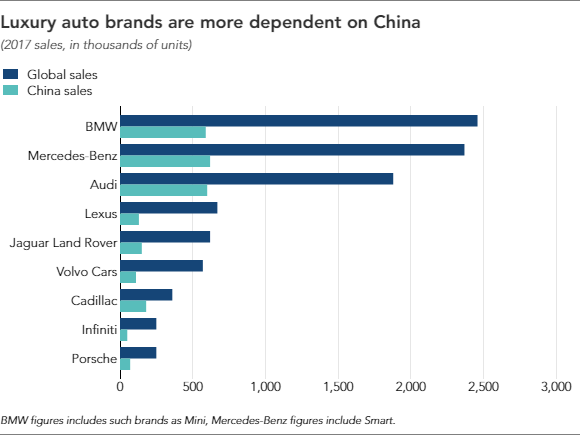 Audi was the exception to the general growth trend: Sales crept up only 1% in China, matching overall growth. The brand did not manage to draw Chinese buyers as its peers did, hurting global earnings. Friction between the German company and its local dealers played a role, sinking sales in the first half.

Overall passenger car sales in China grew just 1% in 2017 to 24.71 million vehicles, crimped by a reduction in tax breaks for compact cars. But a growing number of wealthy individuals helped accelerate premium vehicle sales despite restrictions on luxury consumption by government officials. Regulations barring residents of Beijing and Shanghai from purchasing a second vehicle have also pushed those shopping for their primary ride toward the high end. Growth in the luxury segment is expected to persist as incomes outside major cities rise as well.

Other high-end automakers are taking note of this trend. Companies such as Maserati, a unit of Fiat Chrysler Automobiles, and Britain's Aston Martin are expanding their dealer networks in China, suggesting competition for wealthy Chinese motorists' attention will only intensify.