China lures home graduates as it closes in on US 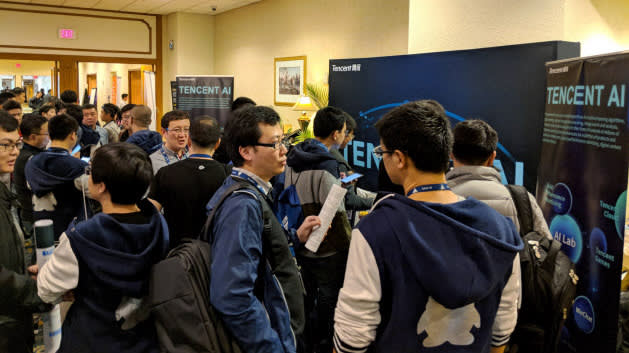 NEW ORLEANS, U.S. -- Chinese internet players have flocked to a research conference on artificial intelligence here, fighting to attract students from their home country who received a top-notch education in the U.S.

Chinese is the language of choice among 34 company and group booths occupying prime real estate near the entrance to the Association for the Advancement of Artificial Intelligence conference, opened Friday. Native speakers represent companies including virtual mall operator Alibaba Group Holding and Tencent Holdings, which runs the communication platform WeChat. They woo students, mainly of Chinese origin, with descriptions of comfortable jobs or invite them to attend parties.

The intense competition reflects the great strides China has made in the field. This year, the AAAI received research submissions in record numbers -- at least 3,800. Entries from China increased 57% on the year to a level roughly even with those from the U.S. Moreover, Chinese researchers were involved with about 60% of the research posters on display -- a privilege given to selected papers. The research poster exhibition was sponsored by Chinese internet company Baidu.

Much of the research on display was inherently politically neutral, but could lead to privacy abuses in the hands of a strong state. Beijing's Beihang University presented an analysis of population movements based on smartphone location data. Baidu showed it could calculate people's worth in the labor market as a numerical value based on their skills. Shanghai's Fudan University demonstrated an improved method for determining who owns a given username on Twitter.

Attendance at the conference has been rising amid the world's AI fever since around 2013. The headcount grew 24% in 2018 to a record 2,300, while roughly tripling over the past five years. With talented AI technicians hard to come by, the conference has turned into a battleground for companies seeking talent.

Asian companies, including Chinese ride-hailing app Didi Chuxing and e-tailer JD.com, made up one-third of those taking part in the convention's job fair held Monday. The students they scouted were likely to return to China if hired, as the businesses offer scant services to the American market as yet and staffing numbers at U.S. hubs are limited.

The administration of U.S. President Donald Trump also handed these companies a gift by making specialist work visas harder to obtain. Having students trained in the U.S. -- the world leader in AI research -- return to China lets the Asian country raise its technological capabilities even further.