HONG KONG -- Where there are social problems, there are opportunities for social business to flourish, and since the global financial crisis struck in 2008, Indian entrepreneurs have been at the forefront of this new kind of capitalism.

Health care for all

On a sprawling plot of land in Bangalore, set back from a noisy, car-filled road, sits the headquarters of Narayana Hrudayalaya, a major hospital chain operator.

The headquarters is practically a town unto itself. It has four hospitals with a total of 2,000 beds, and a school bus can be seen carrying students to the physical therapy and nursing care education schools located on the premises.

The group was founded in 2000 by Devi Shetty, 62, who was the primary physician of Nobel Peace Prize laureate Mother Teresa. After years of growth, the company debuted on the Indian stock market this past January. And although the market has been declining since the start of this year amid global market turbulence, Narayana Hrudayalaya's share price remains higher than its initial public offering price.

Heart transplants at the group's hospitals cost around $2,500 on average, compared with $60,000 to $100,000 in the U.S., providing impoverished people with opportunities to lead healthier lives.

The group has several ways of keeping its fees lows, such as using disposable surgical gowns and gloves, making surgical procedures more efficient, and getting the local government involved in providing health insurance.

Another important tool is the "fast-track" service, offered on the second floor of the hospital I visited. Users of the service are relatively affluent and pay higher fees to receive treatment without waiting. Profit from this service is used to subsidize fees for poor patients waiting for their turns on the first floor.

Some 20% of patients receive heart transplant surgeries for $1,400, according to the group.

It would be more accurate to describe Shetty not as a philanthropist but as a business-minded physician. In his office, he has a message plate that reads, "The world's biggest problems are also the world's biggest business opportunities."

India's gross national income per capita is just 4% of Japan's. As the majority of the Indian population is poor, the inexpensive surgeries offered by the Narayana group are in great demand, and the number of patients visiting its hospitals has been steadily increasing. As of the end of 2015, the group had 23 hospitals, with a total of 5,400 beds, in 31 cities across the country.

Even rich people like Bill Gates cannot continue philanthropic work when they run out of funds, Shetty said, stressing that social contribution financed by business is sustainable.

The group anticipates its business model could also find success in the U.S., where soaring medical expenses have become a national problem. For that reason, the group opened a cardiac surgery hospital in Grand Cayman in 2014 with the aim of accepting patients from the U.S. The island, located in the Caribbean Sea, is just a 90-minute flight from Miami.

"In Indian culture, constraints are seen as a catalyst for innovation" says Kris Gopalakrishnan, co-founder of major Indian information technology company Infosys. Shetty is just one example of that culture.

Varun Aggarwal, 33, founded Aspiring Minds with his elder brother in 2007. He was surrounded by many young employees when I visited the company's office in Gurgaon, outside of New Delhi, recently.

Aggarwal received a master's degree in electrical engineering and computer science at the Massachusetts Institute of Technology.

His company uses artificial intelligence to match job seekers and employers. It does this by using machine learning to sift through vast amounts of data and find patterns in the information. 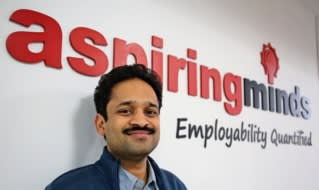 The qualities that make a successful worker vary by industry, and they can change over time. Aspiring Minds repeatedly tests workers to create a portrait of the "ideal employee" in terms of linguistic and cognitive abilities, character and other aspects.

The company also tests students, allowing client companies to hire applicants closely matching their ideal. This practice helps students know what skills they should acquire to find employment at the companies they want to join.

Aspiring Minds' test, called AMCAT, has been adopted by many companies. Seven of 10 major IT companies in India and four of the country's top five banks use the test. In 2014, 500,000 students took the test.

Aspiring Minds has grown rapidly, and now has 450 workers on its payroll.

Aggarwal said he founded the company "to bring  meritocracy to the labor market". In India, companies tend to offer jobs exclusively to students of elite universities. As a result, other students, even if talented, struggle to find employment.

AMCAT thus benefits both companies -- by helping them hire talented an the most suitable graduates -- and students, by making the selection process more fair.

Aspiring Minds has expanded its operations to the Philippines, China, the Middle East and the U.S., as Aggarwal found inefficiency in the employment market to be a global problem. Amazon.com uses the company's test in hiring software engineers.

The Narayana group and Aspiring Minds have a few things in common: Both are contributing to society, both have expanded beyond India, and both are cited as examples in Harvard Business School's textbooks.

At the time of the global financial crisis, the graduate business school of Harvard University was criticized for creating a generation of people good only at making money. This, critics said, created the catastrophic economic bubbles that did so much damage to society when they burst. In response, the school now teaches students about the earnings opportunities to be found in social contribution.

This greater emphasis on contribution to society has exerted a great deal of influence on the management of businesses, and it suggests that Japanese companies can become a model for the world.

Japanese corporate culture emphasizes a company's role within society. This is reflected in the traditional Omi merchants' principal of sampo yoshi or "benefits for three sides," meaning that merchants should consider benefits for vendors, customers and society as a whole in doing business.

I visited a farm on the outskirts of Tianjin, China, to see how Japan's corporate culture is faring abroad.

The farm in Daegu Zhuang, a two hours' drive from Beijing, has dozens of huge vinyl greenhouses, each measuring 10 meters wide, 5 meters tall and 80 meters long. Each one houses various kinds of vegetables, including kidney beans and Japanese mustard spinach.

Workers at a farm located in the suburbs of Tianjin and operated by Beijing-based Fuping Chuangyan pose for a photo.

The farm is operated by Fuping Chuangyuan, a Beijing-based company founded in 2012. The vegetables being grown at its Tianjin farm are hardy varieties and are cultivated with organic farming techniques that minimize the use of agricultural chemicals, said Chen Lin, director of the company's agricultural technical department.

Fuping Chuangyuan produces organic vegetables directly or through contract farms and delivers them to households in the Chinese capital.

The company has a management philosophy of "contributing to society through the businesslike management of farms."

Many Chinese farmers continue to rely heavily on agricultural chemicals despite the health risks this poses. To enhance the recognition of this danger, the company decided to produce and market organic vegetables.

Fuping's business plan envisions a scenario in which an increase in buyers encourages more farmers to produce organic vegetables on pesticide-free soil. The result, the company hopes, will be a sustainable agricultural industry with stable income for growers.

Daichi wo Mamoru Kai, a company based in the city of Chiba, near Tokyo, has invested in Fuping and been providing technical assistance to it.

Daichi, which is engaged in home delivery of agricultural products, is a self-styled social business company. Founded in 1975 as a citizens' group to promote nonchemical agricultural techniques, it later became a joint-stock company.

"We decided to adopt a profit-making mechanism so that we could continue contributing to society," said Kazuyoshi Fujita, the 69-year-old founder and president of the company.

This decision eventually led to the transfer of its management philosophy to Fuping.

Daichi is making preparations for an IPO to raise funds for construction of a logistics center. But once it goes public, the company could have shareholders demanding quick returns on investment. This could tempt it to stray from its original focus on social contribution.

Daichi needs to prove that it can reward shareholders by growing on a long-term basis by continuing its contribution to society.

Japanese corporate culture will draw much stronger attention if Daichi, or any other company, can clear such a high hurdle.